Nigerian rapper and singer, Modupe-Oreoluwa Oyeyemi Ola, popularly known as Mo’Cheddah took to her official Instagram page to fire sensational singer, D’banj after she read the released by his rape accuser,  Seyitan Babatayo.

In the press statement, Seyitan disclosed how she has been threatened by D’banj and his team since coming out with her statement. In Seyitan public statement, she gave the timeline of events that have transpired since she came out publicly with story of her rape. She also disclosed that D’banj used the police to intimidate and kidnap her for 48 hours without cause.

29 year old Mocheddah who obviously wasn’t pleased and could not hide her anger after seeing all Seyitan disclosed in the press statement, condemned Dbanj for all he was accused of in a series of ‘Shame on you’.

“Shame on you, dbanj.

Shame on you for being the bully you have shown us you are.

Shame on you for silencing a young woman from speaking her truth.

Shame on you for being an instrument to unlawful imprisonment.

Shame on you for influencing the order to arrest a woman that has accused you of rape.

Shame on you for making her sign under duress.

you have shown.the world who you are, and that you truly stand for nothing.

This story has gone beyond rape. You have manipulated the justice system to fit your selfish interest. You have broken the law on multiple counts, and you deserve to be CANCELLED .dbanj should be stripped of his endorsements, and his awards should be retracted to send a message to all bullies that believe they are above the law.
The policemen that arrested seyitan unlawfully should all be exposed and relieved of their duty.

The power of your influence puts the onus on you to act right, but Regardless of your status, you are a man first .many might say this case is about cloth chasing, but takeout your bias towards your favorite and replace him with regular joe, wouldn’t you want the same Justice? Do the right thing
#shameondbanj #canceldbanj #saynotorape” 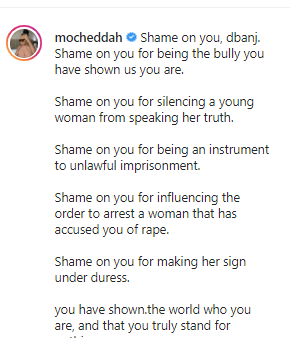 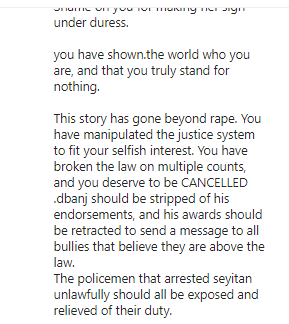 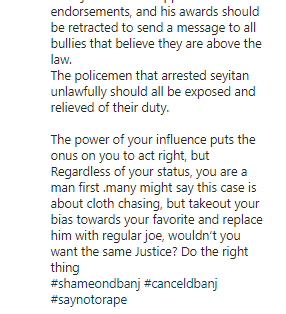 Delta state governor, Ifeanyi Okowa and wife go into Isolation after one of their daughters test positive for Coronavirus.