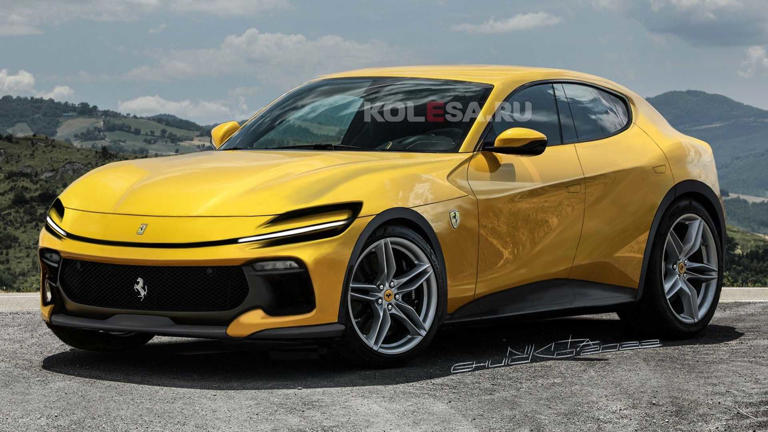 Ferrari will follow Lamborghini and Aston Martin and launch its very own SUV, but with a twist. While the models from Sant’Agata Bolognese and Gaydon are not limited in production, Maranello’s high-riding machine will account for no more than 20 percent of the total annual shipments. With this strategy, the Prancing Horse wants the Purosangue to remain just about as exclusive as its traditional sports cars.

Prior to its confirmed September debut, the Thoroughbred has been speculatively rendered by Kolesa after prototypes carrying the full production body were spotted recently out and about in Italy. Expect the design to feature some Roma influences in a low-slung body as the Purosangue won’t be like most SUVs out there since performance will still take priority, but with more practicality than ever before. It’ll be Ferrari’s first series production five-door car ever considering the 456 GT Venice wagon was capped at just seven cars. Much like the Bentley Bentayga, the Purosangue will be powered by a twelve-cylinder engine, but that’s where the similarities end. The Ferrari for the whole family has been confirmed to get a naturally aspirated V12 whereas the British luxury SUV has a twin-turbo W12. The new platform upon which it will ride has been engineered to accommodate a plug-in hybrid setup, so a potential electrified version is likely going to have a smaller combustion engine.

Originally announced in September 2018, the Ferrari of SUVs will have all-wheel drive and a double-clutch automatic transmission. It will seat four people and won’t have anything in common with the Maserati Levante even though you might remember that early test mules of the Purosangue borrowed modified bodies from Modena’s SUV.

Speaking back in June at Ferrari’s Capital Markets Day, CEO Benedetto Vigna described it as a “true sports car, and unlike any other,” adding it’ll be a “100% Ferrari.” He went on to mention that Purosangue has what it takes to “meet and exceed all the demands of performance, innovation, and design that you would expect” from the fabled Italian marque.