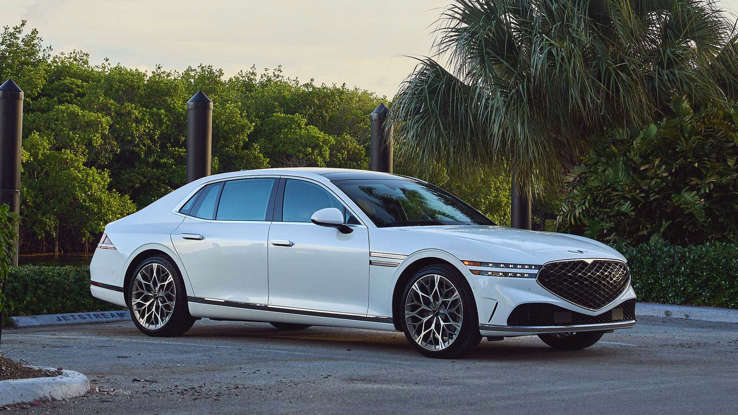 If the Mercedes S-Class is too common and the BMW 7 Series is too polarizing, the Genesis G90 provides a unique alternative.

You have to give kudos to Genesis for keeping the G90 alive at all. The automaker could have done away with it entirely, built another crossover, and blocked the two or three people on Instagram who might have complained.

Sales numbers for the G90 in the US paint a very clear picture of its past struggles: Averaging around 2,000 units per year puts Genesis three and four times below what BMW and Mercedes-Benz do, respectively, with their big boys. But after driving it, I’m convinced this new one could swing the pendulum more in Genesis’ direction.

A vehicle’s verdict is relative only to its own segment and not the new-vehicle market as a whole. For more on how Motor1.com rates cars, click here.

From one generation to the next, the G90 underwent a serious glow-up. This new model is way more interesting than the Benz and actually attractive, unlike the BMW. It combines elegant, flowing lines with familial characteristics like the signature “two-line” headlights – the thinnest on any Genesis to date – and a crest grille, while the back end dons a full-width taillight bar, a “Genesis” wordmark, and a second light bar continuing the two-line theme.

The layered 21-inch rims are gorgeous; the aggressive angles and 3D effect make them some of the most interesting wheels of any car on sale today. And the oversized C-pillar gives the G90 a unique profile distinct from other posh sedans. Designers say this look was intentional to provide more privacy for second-row passengers. 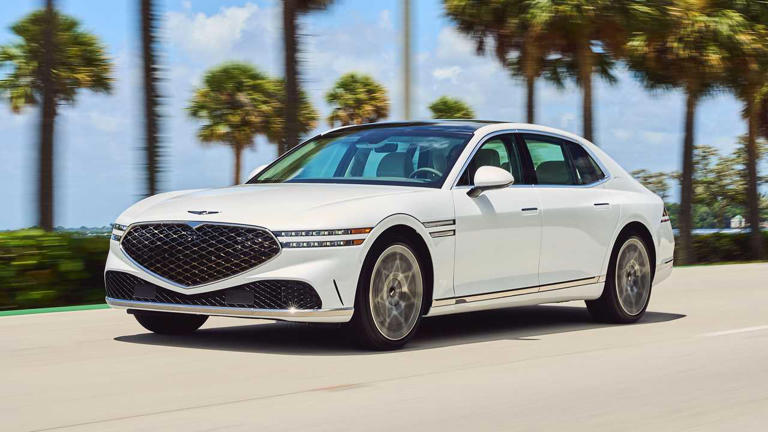 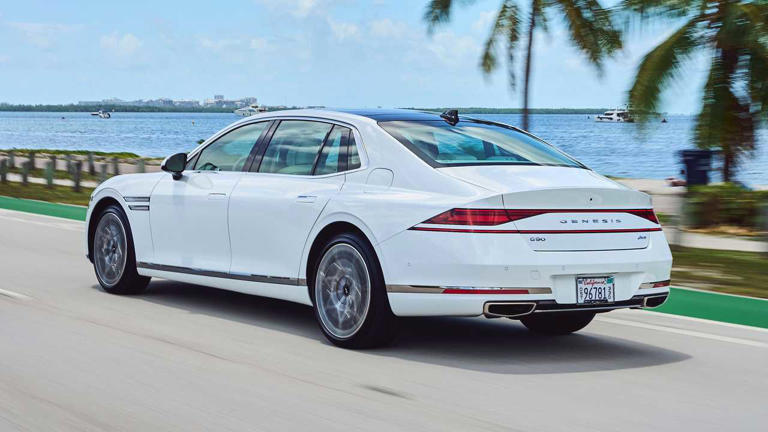 Genesis optimized interior space with ultra-slim air vents and individual elements partitioned into sleek aluminum housings. The beautifully knurled volume knob and climate control functions, for example, have their own subdivisions on the dash, while the shifter and infotainment controller find a separate home on the center console. It’s a clever solution to avoid too much clutter and/or one massive screen.

Nappa leather covers large swathes of the cabin, including the front chairs, which are impeccably throne-like. The contoured buckets wrap around the driver like a fancy leather glove. The side bolsters squeeze even tighter when the car is ticked over to Sport mode, and the massage function is beyond good, kneading everything from your shoulders to your glutes.

But with the G90, the luxurious experience starts before you hop inside. While the concept of using your phone as a key isn’t a new one, Genesis makes the process seamless. There’s no need to download a dedicated app because Digital Key 2 arrives to the driver via text and goes directly into the wallet of their Apple or Samsung smartphone or smartwatch. That means it’s only ever two clicks away from being accessed.

Stand just a few feet from the car, phone in hand, and watch the flush door handles deploy from the bodywork, the climate control kicks on, and the seats adjust automatically to the previous position. It’s like the G90 knows you on a personal level. And even if there are multiple drivers of the same car, individual digital keys mean your spouse’s preferences won’t clash with yours.

Once you’re situated, look for an inconspicuous button on the door panel and give it a good push. Just like a Rolls-Royce, the driver’s door swings inward automatically; power-operated doors with a soft-close function come standard at all four entryways. Not even the standard S-Class can do that.

A center touchscreen and a corresponding digital instrument cluster sit atop the dash, both 12.3 inches. But these two displays are puny compared to the monolith Mercedes Hyperscreen and even BMW iDrive 8. Heck, even the G80 has a lovely 14.5-inch touchscreen that trumps the center stack in the G90. But at least the same straightforward operating system carries over. 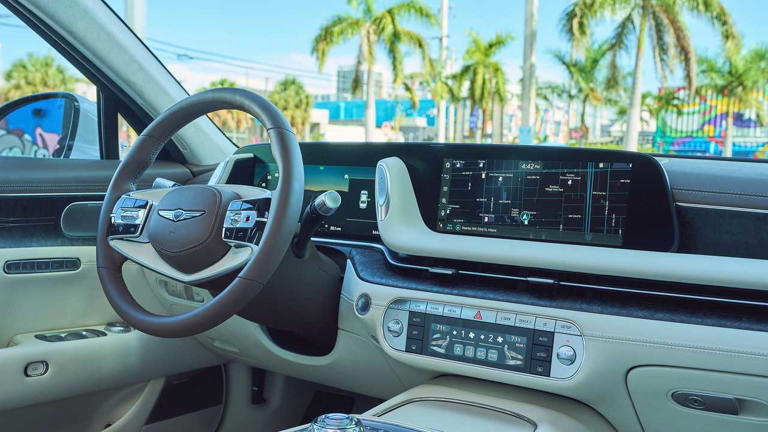 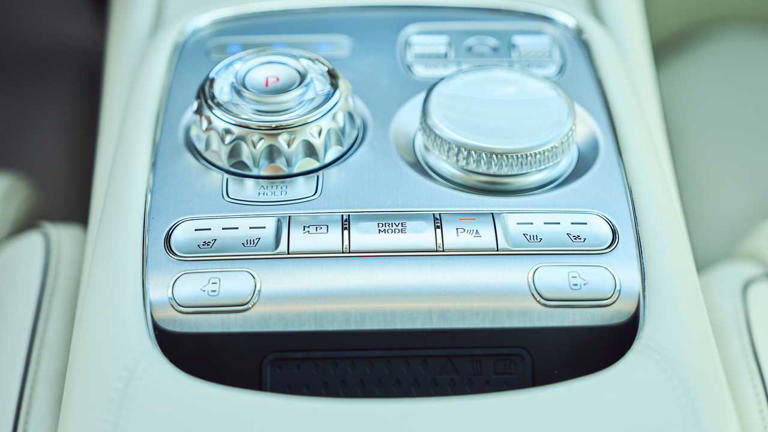 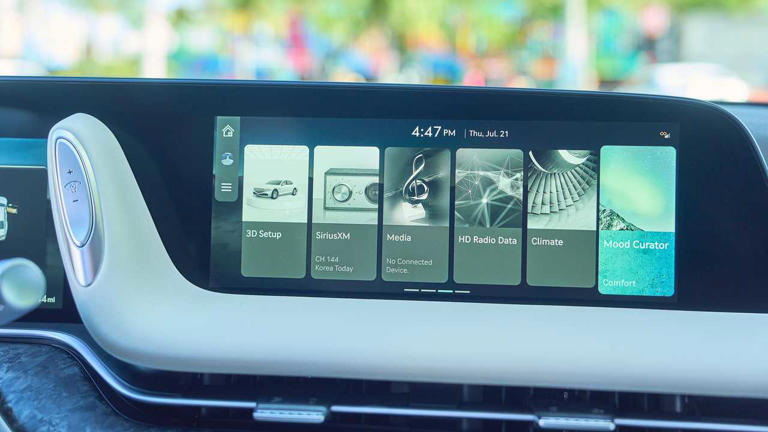 Genesis also borrows a page from the Mercedes-Benz playbook with a Mood Curator function. It’s a bit gimmicky, sure, but each of the four different settings – Vitality, Delight, Care, and Comfort – make the interior feel homey with custom sounds, graphics, and delightful fragrances.

Audio pumps through a 26-speaker Bang & Olufsen system and delivers a unique experience. Wanting to bring the Boston Symphony Orchestra to your vehicle, Bang & Olufsen created a setting meant to mimic the iconic music hall. Having never been there, it’s hard to say whether the carryover is one-to-one (probably not), but the deeper bass, richer notes, and subtle echo do make for something different. 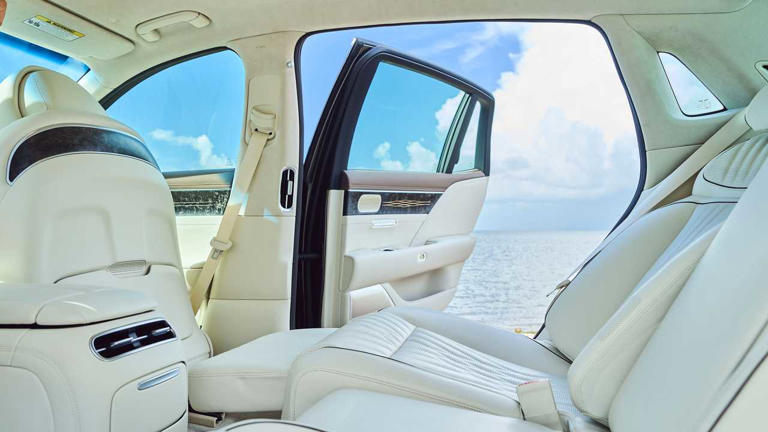 Back seat passengers get access to their own 8.0-inch touchscreen for managing things like seat settings, climate control, and audio. There’s also a button on the door panel that puts the rear seats into a reclining Relaxation Mode, while another button folds the front passenger seat forward entirely for maximum legroom. And the same massage functions you get on the front seat extend to the second row with no compromise. The back seat is lavish as hell – but the driver’s seat ain’t bad either. 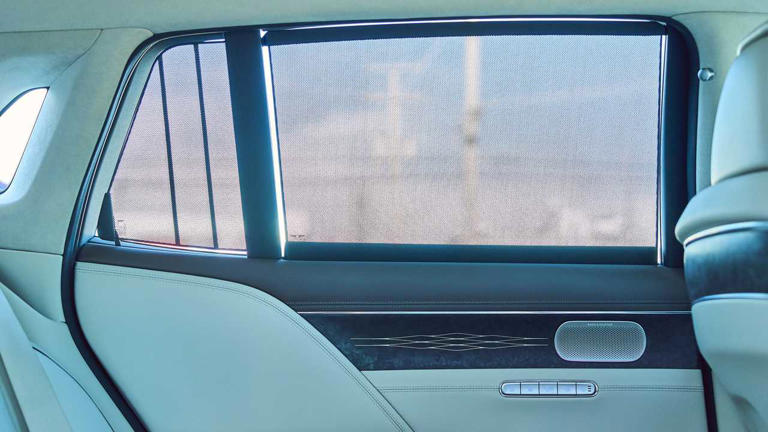 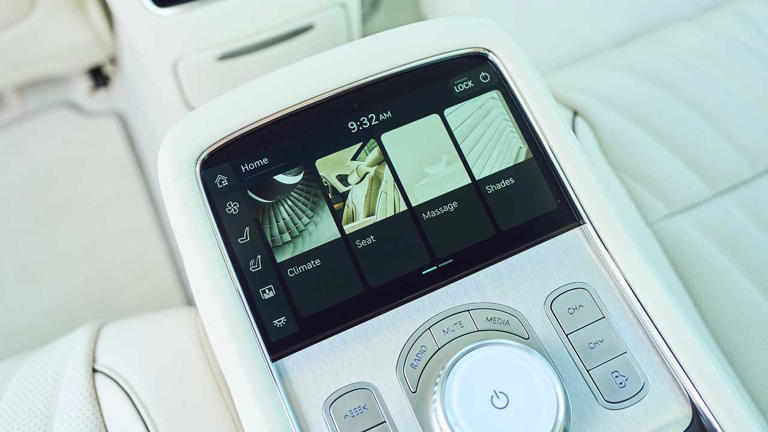 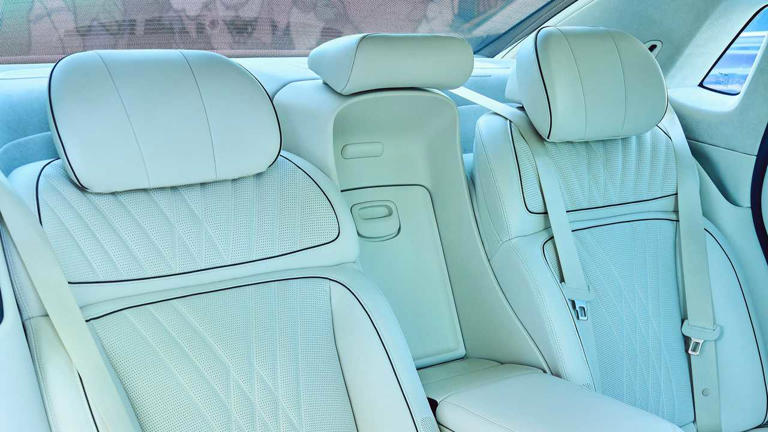 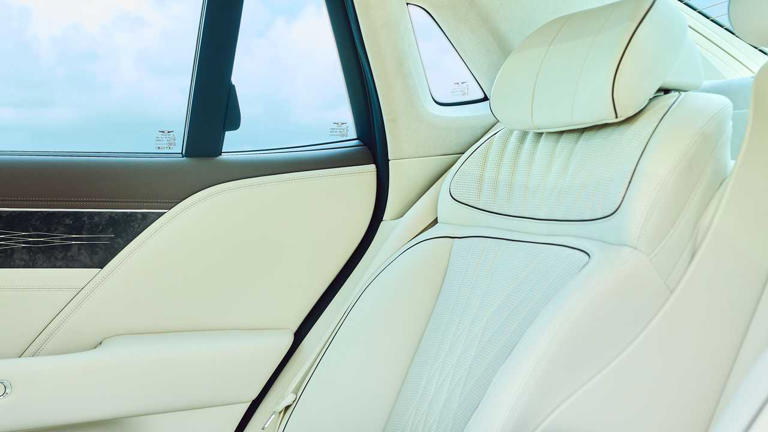 Here’s the bad news: Genesis discontinued its brawny, lovable 5.0-liter engine. The G90 was one of the last remaining large luxury sedans with a naturally aspirated V8, and now the species is all but extinct. But here’s the good news: the G90’s new six-cylinder mild-hybrid is a great replacement.

Similar to Mercedes’ EQ Boost function, the new 48-volt system in the G90 powers an electric compressor that spools the turbocharger to help eliminate lag. And the combo of two turbos and an electric compressor attached to the 3.5-liter V6 bring the total output to 409 hp and 405 lb-ft. While I didn’t get to sample the base motor – the same twin-turbo 3.5-liter V6 from the G80 – it should still be plenty good. On the G90, that entry-level option delivers 375 horsepower and 391 pound-feet of torque. 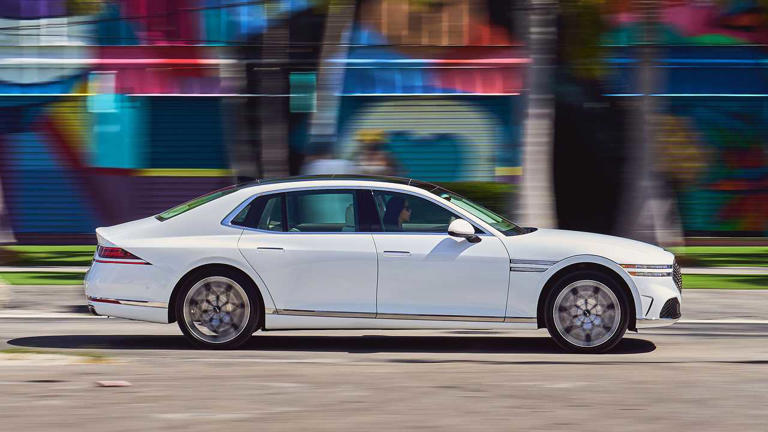 But the top-end G90 certainly isn’t slow. There’s a bit of lag early on, even with the electric compressor, but the twin-turbo engine and e-boost are robust enough to make you want to bury the accelerator at higher speeds. With Sport mode activated, which changes the throttle map for improved acceleration response, the G90 hustles off the line confidently.

But more than anything, the G90 is an exceptional highway cruiser – and much of that credit goes to the new suspension system. Standard multi-chamber air springs afford the large sedan a refined ride, preventing rattles over imperfect pavement or harsh clunks over potholes. And in an effort to reduce wind noise and unwanted vibrations, the suspension automatically lowers the vehicle at high speeds for more stability. 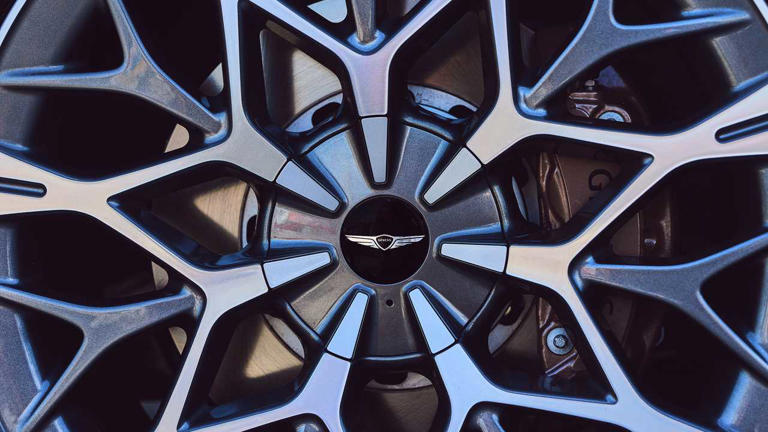 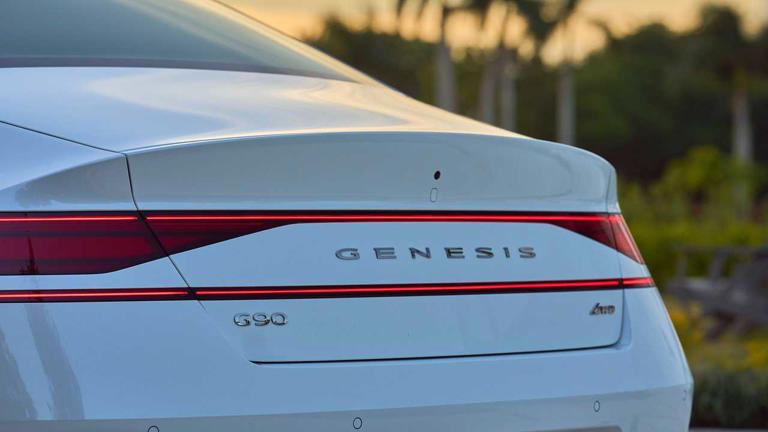 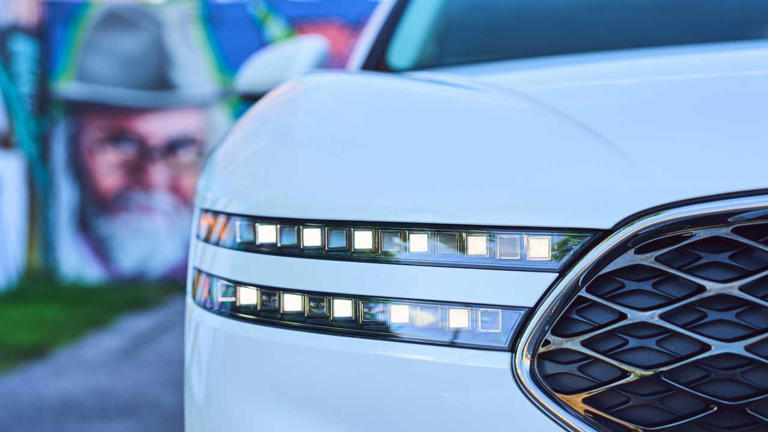 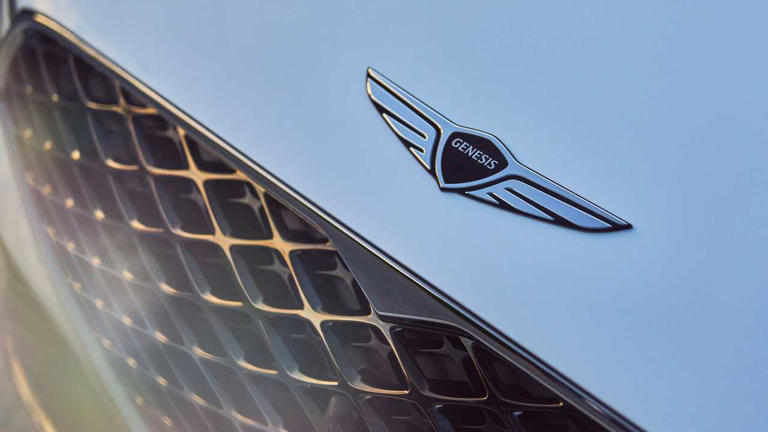 A new Preview-Electronic Control system uses the front-mounted camera and navigation to predict upcoming bends and can even detect bumps in the road up to 330 feet away. And just as the ride drops on the highway to improve stability, the suspension raises the vehicle on broken pavement to reduce harshness.

Rear-wheel steering also comes standard, and you can feel the back end move more fluidly around corners with it. That also improves the turning radius, which helps in plenty of situations; this is a big sedan and it isn’t exactly easy to navigate around tight parking lots. 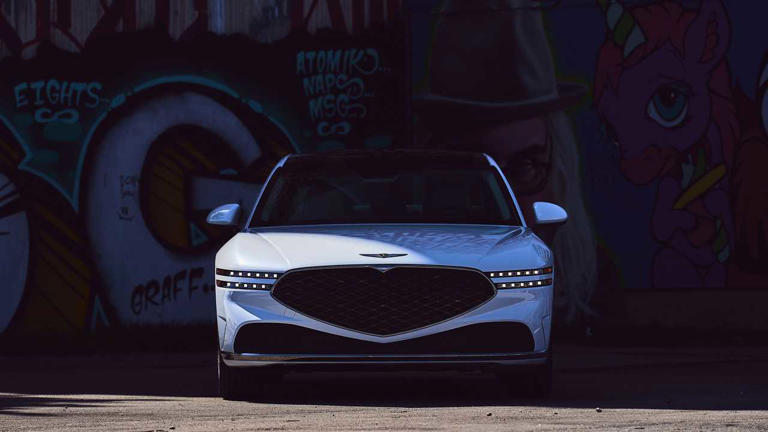 The G90 has a lovely and unique exterior design, a properly sumptuous interior, and there’s enough equipment to satisfy both tech-savvy one-percenters and their Gen Z children. Making things especially interesting is the starting price. The G90 costs $89,495 out of the box with the $1,095 destination fee, and the more powerful engine asks $99,795. At either price point, the G90 is one of the more affordable options in the class.

Sure, there are still going to be BMW and Benz loyalists that continue on into their next S-Class or 7 Series unfazed by the latest player from the Korean luxury brand. But for those wanting more than just a rolling status symbol, the new Genesis G90 hits all the right notes.

Yes, the G90 is expensive when comparing it to the average price of a new car. It has a starting price of $89,495 with the $1,095 destination fee included. But compared to other full-size sedans like the S-Class and 7 Series, the G90 is actually on the more affordable side.

Not yet. The G90 currently uses two versions of a twin-turbocharged 3.5-liter V6 engine, one with an integrated starter-generator that makes it a mild hybrid.

Is Genesis Made By Bentley?

No. While the new G90 may look like a Bentley, Genesis is actually the luxury subsidiary of Hyundai Group.