After spending nine months in prison, Nigerian man accused of beating his wife to death is exonerated

A Nigerian man, Kingsley Ekene Eze, has been exonerated three years after the family of his deceased wife, Blessing Eze, accused him of beating her to death.

Eze was arrested and sent to prison where he spent nine months. 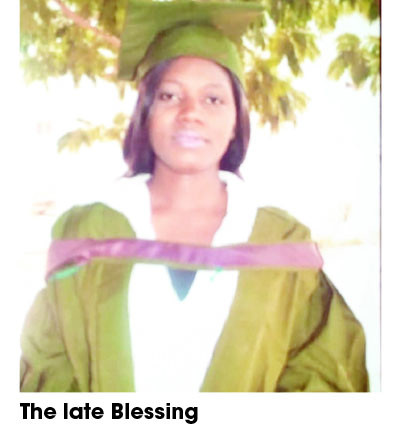 Sources reported that Mrs Eze, a teacher at Shalom Academy, Nsukka, slumped in the school’s staff room on May 15, 2017, after she had finished conducting the morning assembly. She was immediately rushed to Akulue Hospital, near the school. After several tests were conducted on her, the medical director of the hospital informed Mr. Eze that his wife was down with stroke.

Mr Eze in an interview said as her condition got worse, she was referred to Parklane Hospital, Enugu. But there was no bed space at Parklane. And she was moved to Ntasiobi Hospital, yet there was no improvement.

”I became apprehensive. The next day, I went to Memphis Hospital, where another test was conducted. The doctor there told me that her case could not be handled at Ntasiobi, and he advised an urgent transfer.

After being transferred to Memphis, again, my medical adviser told me to transfer her to the University of Nigeria Teaching Hospital (UNTH), Enugu. But Memphis refused to refer her to UNTH. It was a fierce battle between me and the medical doctors at Memphis. Eventually, they gave me a bill of more than N500,000.

After two days at UNTH, the doctor told me that she would be referred to Memphis because the surgical operation she needed could only be done at Memphis. When I got to Memphis, they asked me to pay N2 million for the operation – N1 million deposit and the balance within 48 hours. I rallied round for the N1 million from relatives, friends and colleagues.” he said

“When I went back to the hospital the following day with Chinedu, the doctor told me that my wife was gone. But what baffled me was that he couldn’t allow me to see her corpse.

I went back to clear my bills, so that I could bury my wife, but the hospital staff were not forthcoming. I became furious with the doctors, having suffered so much. I confronted one of them and demanded that my wife’s corpse be released to me. Surprisingly, the doctor told me that my wife was still alive. He even took me to the intensive care unit (ICU) where she was, and I confirmed that she was still alive, though unconscious.

They continued with the treatment, but, sadly three days later, she died. That was June 25, 2017.

All these happened in the presence of Chinedu, her brother. We took her corpse back to our community. We, including Chinedu, deposited her corpse at Faith Foundation Hospital, Nsukka.  Memphis gave me a bill of N750,000 to pay. I could not clear everything. I had to write an undertaking that I would pay the outstanding N750,000 after her burial.

We informed both the immediate and extended family of her death and fixed a date for her burial. It was to take place on June 30, 2017. All the drinks to be used for her burial were bought from my father-in-law and I paid a better part of the money. His truck was hired to convey those drinks to my house for the ceremony.”

Eze said he got the shock of his life when just a day to the funeral of his late wife, her family members alleged that she died from the injuries sustained from the severe beating he gave her. Eze said he was arrested and thrown into a cell.

He said he was subsequently taken to the police station in Nsukka, where he was detained for two days. With that development, the burial ceremony was automatically cancelled. Two days later, Eze said he was taken to the Criminal Investigation Department (CID), Enugu and was later charged to court and subsequently remanded in Enugu prisons, where he stayed for nine months.

He said that while he was in prison, all efforts to get him released by one Catholic priest, Rev. Fr. Simeon Ugwueze who was then the director of Justice and Peace in the diocese, proved abortive.

He said his family members then filed a case in court to challenge his detention. The bereaved husband claimed that the judge ruled that anyone who believed that Eze was responsible for his wife’s death should come forward to prosecute the case but nobody showed up, and the case was subsequently withdrawn from court.

When interviewed, the mother of his deceased wife, Mrs Edith Ugwu, said her family later discovered that their son-in-law was innocent of all the allegations against him. She blamed members of their extended family for deceiving them to believe their son-in-law had a hand in their daughter’s death. Mrs Ugwu apologised to Mr Eze for the pain and embarrassment he had been subjected to.

“When my husband was sick, Eze bankrolled all the medical expenses. He has been so nice to us. It was our extended family members who deceived us into accusing him of killing his wife, my daughter. Even before my husband died, he called us together and told us that Eze was innocent of those allegations against him. Before Eze was arrested, I did all I could to make them reason with me that he was innocent, but they wouldn’t listen. We, therefore, apologized to Eze for all the allegations we levelled against him,” she said.

Also speaking, the brother of late Mrs Eze, Chinedu, explained that members of the family were indeed lured into accusing Mr Eze of killing his wife. He recalled how his father, a few months before his death, came to realise that the family members were deceived into accusing Eze of murdering his own wife.

“My father, however, told us to make peace with Eze and apologise to him,” Chinedu said.