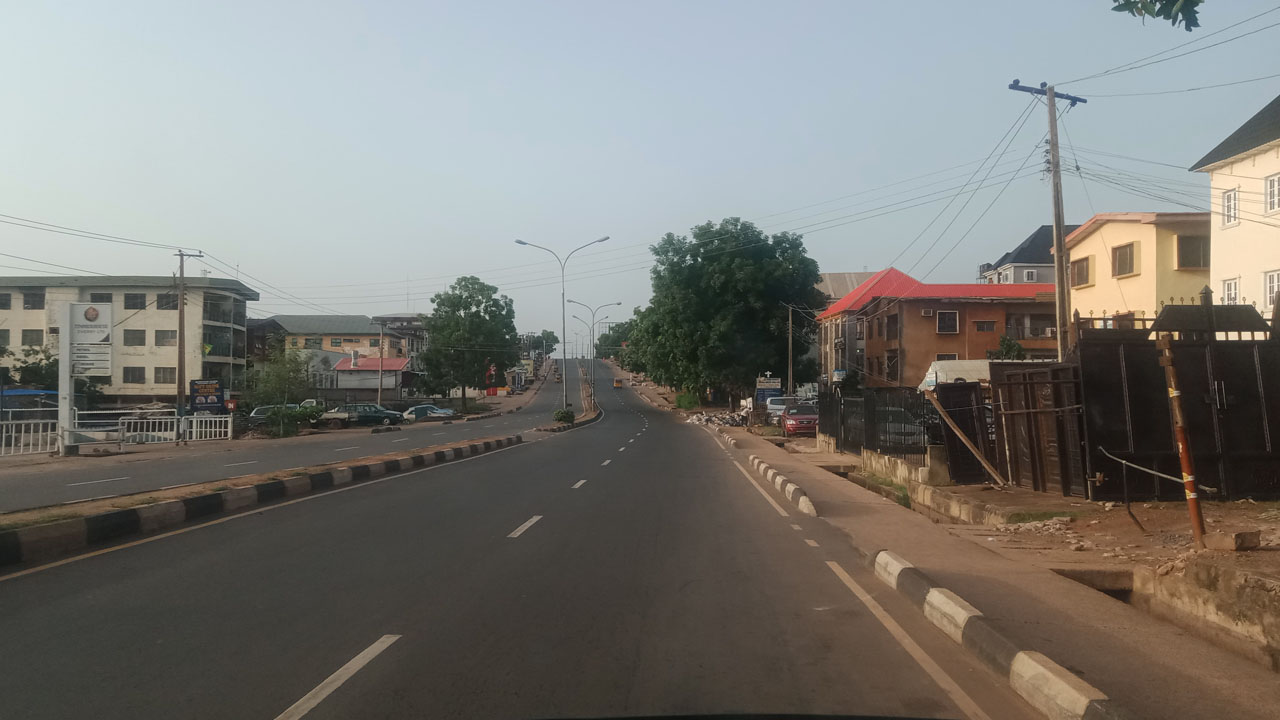 Ever busy Agbani road deserted in compliance with IPOB’s sit-at-home order in Enugu.

The Indigenous People of Biafra (IPOB) has declared another sit-at-home in the South East today. Its spokesman, Emma Powerful, said the decision is due to the appearance of their leader, Mazi Nnamdi Kanu in court today.

The usual Monday sit-at-home in the zone still keeps residents indoors as banks, markets, shops and other commercial centres remain closed in Anambra and other South-East states.

Civil servants in Anambra stayed away from work, as members of the pro-biafra group continue to issue threats to residents.

A statement, yesterday, by IPOB reads: “We had announced that any day our leader, Kanu, would appear in court, everybody will, in solidarity with him, stay at home.

“Therefore, today will be sit-at-home in Igboland and other areas where Ndigbo reside.”

The group has also told the Nigerian Army, police and the Department of State Services (DSS) agents that the group and the Eastern Security Network (ESN) are not responsible for atrocities happening in the South East.

They said those being arrested and killed by the security agencies are neither IPOB members nor ESN operatives.

The group was reacting to the raiding and flushing out of criminal elements’ hideout in Anambra by security agencies, recently.

In a statement, yesterday, the IPOB’s Media and Publicity Secretary, Emma Powerful, advised security agencies to apply professionalism in their duties, as arresting and killing innocent citizens of the area would not help the situation.

Powerful said: “Those arrested and killed are not IPOB members, because the group members are professionally trained, not criminals terrorising peaceful communities in Anambra and parts of Orlu in Imo State.

“We are equally warning Nigerian soldiers deployed in Ukpor, Nnewi South Local Council to stop going house to house, searching out innocent people and tagging them members of ESN. That is unacceptable. Face the criminals and their collaborators and stop linking them to IPOB.”

“The desperation to demonise IPOB and ESN members as criminal elements cannot work, because the public understands how IPOB operates since we started. Arresting innocent people and parading them as ESN operatives or IPOB members cannot make us succumb to your blackmail.”

The group pointed out that it had started fishing out criminal elements sponsored by politicians to terrorise South East with the aim of blackmailing IPOB.

Many PVC registrants who could not complete their registration are diasporans –…