The controversy surrounding the actual daily petrol consumption in Nigeria has been unending with the different agencies in charge of the importation and distribution of Premium Motor Spirits reeling out conflicting figures. OPEOLUWANI AKINTAYO fact-checks the different claims by these agencies to determine the correct daily volume of PMS consumed in the country

The NNPC GCEO had in the process, blamed security agencies for the country&#39;s porous borders which has encouraged massive smuggling of products to neighbouring countries.

Kyari’s claim had angered the Comptroller-General of Nigeria Customs Service, Col. Hameed Ali (retd.), who then at a session with the House of Representatives’ Committee on Finance, faulted the NNPCL GCEO, saying that NNPC could not scientifically prove the 68 million litres per day consumption claim. He alleged that the nation’s oil company was supplying a daily excess of 38 million litres as NNPCL allowed the lifting of 98 million litres daily.

He queried the 60 million litres per day claim of the NNPCL boss.

However, in a separate statement issued in Abuja, Group General Manager, Group Public Affairs Division, NNPCL, Garba-Deen Muhammad, insisted that between January and August 2022, “the total volume of PMS imported into the country was 16.46 billion litres, which translates to an average supply of 68 million litres per day.”

It added, “Similarly, import in the year 2021 was 22.35 billion litres, which translated to an average supply of 61 million litres per day.”

Regulatory Authority. NNPCL added that daily evacuation (depot loadouts) records of the NMDPRA do carry daily oscillation ranging from as low as four million litres, to as high as 100 million litres per day. 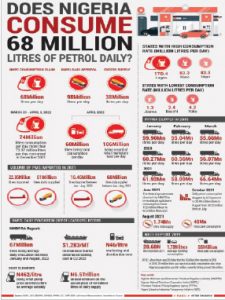 On its part, the NMDPRA recently reported that the average daily evacuation (depot truck out) from January to August 2022 stood at 67 million litres daily.

While making his point, Kyari acknowledged that the NNPCL recognised the impact of maritime and cross-border smuggling of PMS on the overall supply framework. “NNPC also acknowledges the possibilities of other criminal activities in the PMS supply and distribution value chain. As a responsible business entity, NNPC will continue to engage and work with relevant agencies of government to curtail smuggling of PMS and contain any other criminal activities,” he said.

On how the daily petrol consumption was arrived at, NNPCL said the average Q2 2022 international market determined landing cost was US$1,283/MT and the approved marketing and distribution cost of N46/litre. “The combination of these cost elements translates to a retail pump price of N462/litre and an average subsidy of N297/litre and an annual estimate of N6.5tn on the assumption of 60 million litres of daily PMS supply. This will continuously be adjusted by market and demand realities,” it said.

In another twist, NNPC in its weekly National PMS Evacuation Report for March 21 to April 3, 2022, had put daily consumption at 74 million litres. According to the firm, the figure was for the week ended April 3, 2022, higher than the 72.07 million litres per day used in December 2021. The NNPC further put the quantity of petrol used by the country in 14 days at 1.03 billion litres.

Again, in June 2021, Kyari said the federal government directed the NNPC to immediately cut down consumption from 102 million litres to 60 million litres.

Meanwhile, a look at a report from the defunct Petroleum Products Pricing Regulatory Agency revealed that daily petrol consumption dropped by 8.14 per cent to 55.99 million litres in August from 60.55 million litres in July 2021. The then PPPRA General Manager, Corporate Services, Kimchi Apollo had said the total petrol supply for the month of August 2021 was about 1.74 billion litres.

However, in August 2021, the House of Representatives Committee on Finance accused the defunct PPPRA of doctoring figures as it observed discrepancies in the documents submitted before it. The lawmakers observed that daily consumption was put at 48 million litres within the period under review, while Automotive Gas Oil was put at 10.5 million litres per day.

Also, the Nigeria Extractive Industries Transparency Initiative in its report on the Oil and Gas Sector 2019, said Nigeria imported a total volume of 20.6 billion litres of petrol in 2019. This brings monthly consumption to an average of 1.7bn monthly, and daily consumption of 55 million. NEITI said the figure was three per cent higher than the 20 billion litres imported by the country in 2018.

The House Committee on Finance represented by Deputy Chairman of the Committee, Saidu Abdulahi, said the customs boss and other agencies are misleading the public with confusing figures.

“The figure NNPC Limited quoted is not in tandem with other figures quoted by other agencies”, he said, advising the Corporation and other agencies to reconcile their figures.

Professor of Political Economy and Management expert, Pat Utomi told The PUNCH in an interview that corruption and incompetence were inhibiting the NNPC, customs and other relevant agencies from having the correct data at their fingertips.

“In this time and age of cutting technology, how can agencies responsible for such information claim they do not know the actual volume of products consumed? Modern technologies have made it possible for all agencies to know and have access to such figures at the same time every day if they want to. The only problem that can be responsible for such discrepancies is corruption and incompetence,” he said. He claimed that Nigeria could solve the challenges by putting the right people in the right places.

On his part, Chief Executive Officer, Centre for the Promotion of Private Enterprise Dr Muda Yusuf, described the banter as shameful, adding that a forensic audit that is needed to unravel the controversies regarding daily PMS consumption figures.

“If they want to get the proper amount in terms of volume; they should just go for a forensic audit.

Let auditors check how much NNPC releases into the market every day and whom they give it to,” he said. He added that the volume can either increase or decrease depending on market demand.

Culled from the Punch Newspapers