Don’t come back until you find him’: The harrowing story of a father’s desperate attempt to save his son in the Oregon wildfires 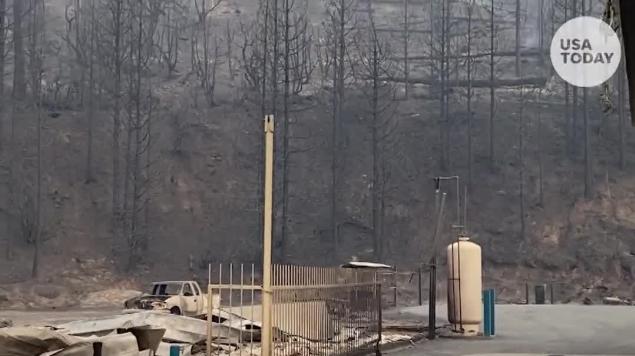 During the search for his 13-year-old son Wyatt in the Beachie Creek Fire in Oregon, Chris Tofte and a family friend acting as a spokesperson shared their experiences during multiple interviews with The Statesman Journal of the USA TODAY Network. This reporting is the culmination of those interviews, including Tofte’s first-hand accounts and other details shared with him by his wife, Angela Mosso.)

SALEM, Ore. — Chris Tofte blew past the blockade, his green Jeep Cherokee aimed for the bowels of the raging Beachie Creek Fire.

It was around 4 a.m. Tuesday, and he was desperately searching for his wife, son and mother-in-law. The family lived 4½ miles up North Fork Road SE, about 10 minutes from Lyons and 30 minutes from Salem.

Halfway there, the road flanked by walls of fire and fallen trees, he stopped for a man whose arm was badly burned. The man wanted a ride but didn’t get in when he found out Chris was headed deeper into the wildfire.

Chris agreed to pick him up on the way down, but the man wondered out loud whether he’d make it.

Back in the Jeep, struggling to navigate a road once so familiar but now shrouded by smoke-filled darkness, Chris almost ran over what looked like a bikini-clad woman on the road. Once he was closer, he realized she was wearing underwear. Her hair was singed, her mouth looked almost black, and her bare feet were severely burned.

He impatiently tried to help her into his car, explaining how he needed to find his wife and son, feeling like she was resisting.

Finally, she spoke. “I am your wife.”

He felt like he was going to pass out. He thought he would start crying. Instead, he said, something turned off in him. He didn’t feel anything.

Once they were in the car and he got turned around, which was tricky with the borrowed trailer in tow, he sped down the road. As he approached the blockade, he honked the horn to get the attention of nearby paramedics.

While Angela was being tended to, he tried to ask about Wyatt.

Their 13-year-old son was missing.

Angela Mosso, Angie to most, is a devoted wife and mother.

When her son’s baseball team needed a coach, she volunteered. It didn’t matter that she barely knew how to throw a ball.

She’s also been a dedicated caretaker for her mom, Peggy Mosso, for nearly 10 years.

She had watched the wildfires come out of nowhere and spread swiftly. When evacuation orders seemed imminent, she began packing some of their belongings and putting items on the porch. Her husband could load them when he returned with the trailer he was borrowing from a friend.

He still wasn’t home when they went to bed — only to wake up to their house on fire.

The three of them were able to get out, with their dog and three cats, and were set to leave in one of the family’s vehicles when something went wrong. Chris figures the car must have caught fire.

It was clear to Angela they would not be able to drive out. She needed to save Wyatt. She told him and Duke, the family’s 200-pound bull mastiff mix, to run for it.

Escaping on foot wouldn’t be possible for her mother. Peggy, 71, had recently fallen and broken her leg. She was scheduled to have surgery in a few days. Ultimately, Angela knew if she wanted to survive, she had no choice.

She had to leave her mom behind.

Peggy Mosso died in the fire. Her remains have yet to be recovered.

Angela got out by walking nearly three miles on the blazing hot asphalt. If she had shoes when she started, they melted away.

Chris still doesn’t know all the details. He never will. Even when Angela has been able to provide some of them, they’ve been difficult to absorb. He hadn’t slept since Sunday night and barely knows what day it is.

Angela was transported first to Salem Hospital, then to the Legacy Emanuel Hospital Burn Center in Portland, where she remains in critical condition. In addition to her feet, she has burns on her arms and back.

Her instructions to her husband of 24 years after he visited her on Tuesday: “Don’t come back until you find him.”

What she didn’t know was that Chris drove back up North Fork Road that first night, while she was on her way to Oregon’s only burn center, looking for Wyatt.

By then, though, the fire had spread.

He couldn’t make it half as far as he did the first time before turning around and even then, he had some close calls negotiating fallen trees. He saw flames rising over the ridge and wasn’t sure he could beat the fire down the hill.

Chris continued to search the next day and night, his throat hoarse from yelling his son’s name. Friends and family spread the word by posting photos of Wyatt on Facebook. Thousands of people shared the posts.

Some responded by joining the search. Others could only offer prayers.

False hope surfaced when someone posted that the boy had been found safe at a friend’s house. If only it had been true.

Friends and family still clung to hope that Wyatt, who turned 13 in February, had made it out safely. But they had seen his mom, her injuries, her bare feet. How long would Wyatt’s shoes last?

Chris grew frustrated with the response from law enforcement — limited to what it could do because of extremely dangerous conditions in the evacuation area — and organized his own search efforts.

He gathered a group Wednesday afternoon at the Stayton Park and Ride to coordinate plans, and they caravanned to the base of North Fork Road, the same place where Chris blew past the blockade that still stands.

Then he spoke with Marion County Sheriff’s deputies. He listened, obviously distraught over what they told him. He hugged someone, spurned attempts from friends trying to console him, then got in his Jeep and sped away.

Wyatt’s body had been found. His son had died.

Leann Moore, a friend of Angela’s for more than 20 years, said he was found in the driver’s side of a vehicle on the family’s property, with Duke draped over him.

No one knows how or why Wyatt returned.

Earlier in the day, his dad rehashed his worst nightmare. What if he had been allowed past the blockade or blown through it earlier? Could he have saved them?