By effizziemag On Sep 19, 2020
attends the Tidal launch event #TIDALforALL at Skylight at Moynihan Station on March 30, 2015 in New York City.
0
Share 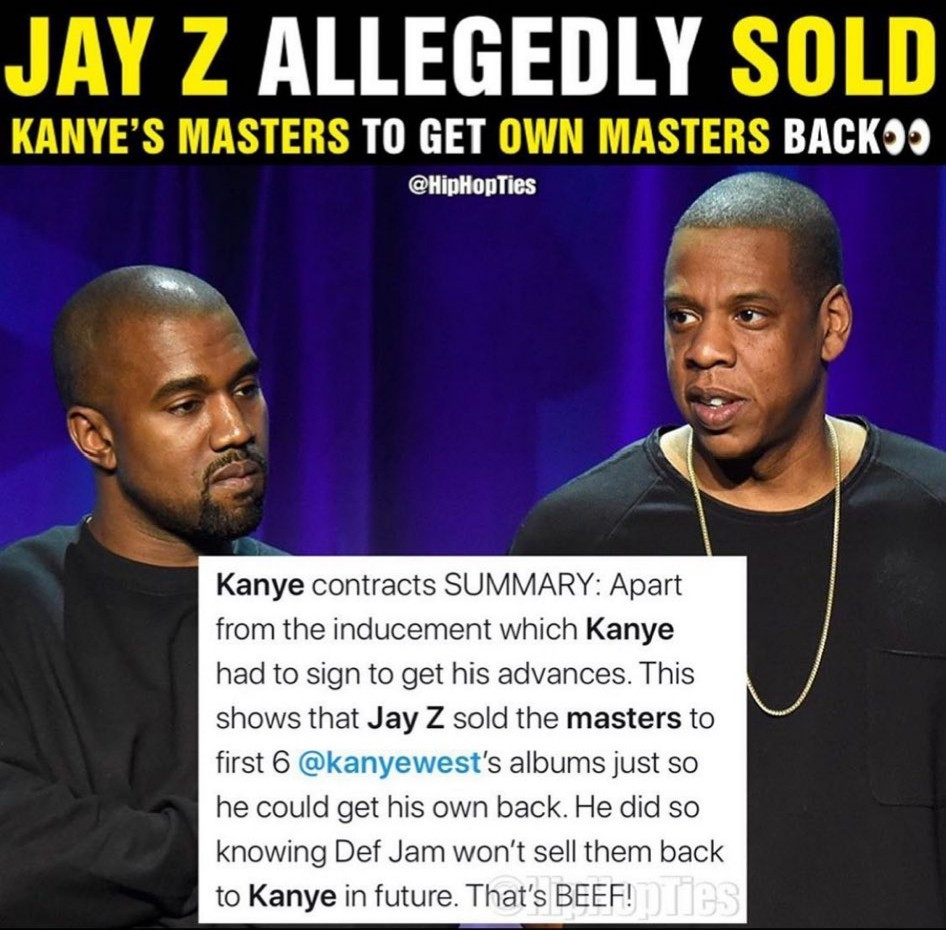 Kanye West has defended Jay Z after it was alleged that the latter sold Kanye’s Masters to get his own back.

Kanye, who had been temporarily banned from Twitter for sharing a journalist’s phone number on his timeline, returned to the platform today to react the claims Jay Z sold him out.

Kanye, 43, tweeted screenshots of a post by blogger Akademiks, featuring the headline, “Jay Z Allegedly Sold Kanye’s Masters to Get Own Masters Back.” 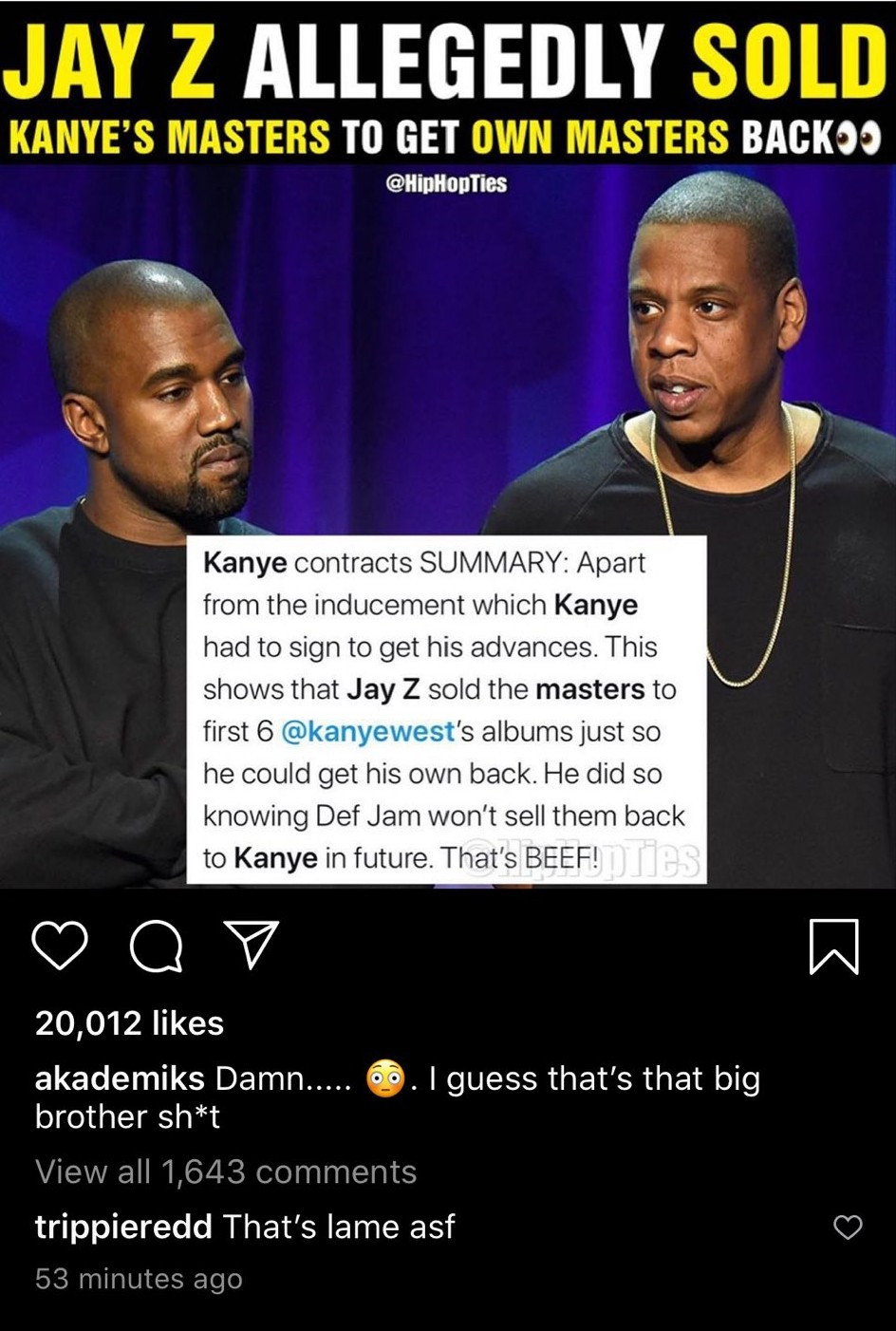 Reacting Kanye said Jay is his brother and the media shouldn’t come between them.

Kanye wrote: “Don’t let the system pit us against each other. JAY IS MY BROTHER … I have eternal love for all artist that have been through and are still trapped this crooked system. Jay still doesn’t get his own masters back for ten years. I will see to it that we all get our masters.” 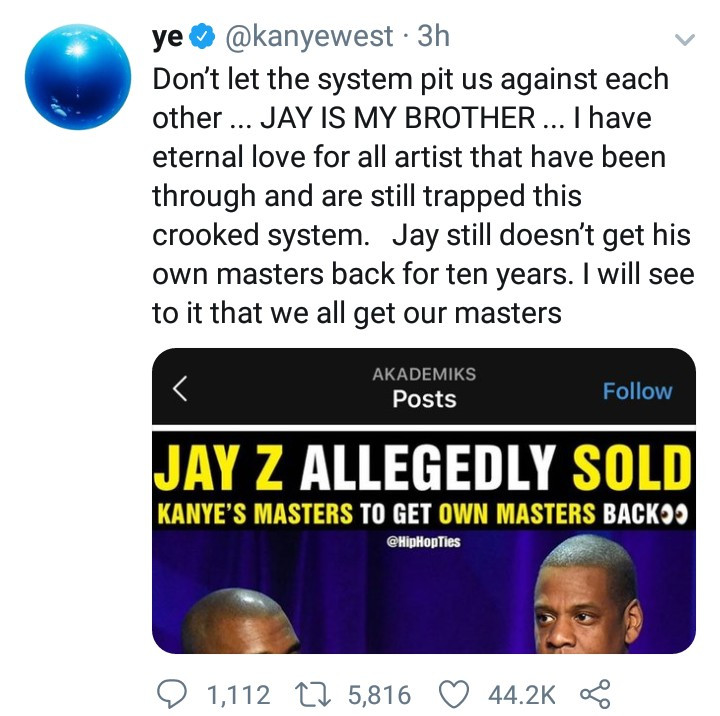 He added: “we will change the paradigm.”

Kanye, who is battling Universal Music Group for ownership of his masters, posted his entire contract on Twitter earlier this week.

Several music industry executives who read through the contracts concluded that Jay Z sold Kanye’s first six albums in order to get his own masters back.

@lavidaNOTA, a South African label owner, wrote: “Kanye contracts SUMMARY: Apart from the inducement which Kanye had to sign to get his advances. This shows that Jay Z sold the masters to first 6 @kanyewest’s albums just so he could get his own back. He did so knowing Def Jam won’t sell them back to Kanye in future. That’s BEEF!

“[Kanye] owns album[s] 7-10 but the most lucrative and most critically acclaimed albums are owned by Roc-A-Fella which is wholly owned by Def Jam… The majors will never sell you your masters because that’s what gives them market share and drives profits and Jay Z knew that.”

Cardi B explains why she filed for divorce from Offset, says ‘sometimes people really do grow apart’ (video)