British Formula one racer, Lewis Hamilton, won the British Grand Prix today despite suffering a tyre puncture on the last lap, bringing a dramatic finish to a pulsating finale.

The Mercedes driver’s left-front tyre failed halfway around the last lap but he held on despite extreme pressure from Red Bull’s Max Verstappen who came second while Ferrari’s Charles Leclerc came third.

Hamilton had been having a smooth race despite two other Mercedes drivers experiencing punctured tyres, until he too suffered a puncture, this time heading down the back straight towards Brooklands.

Then it was a question of whether he could finish the remainder of the lap – more than half of it – before Verstappen caught him. 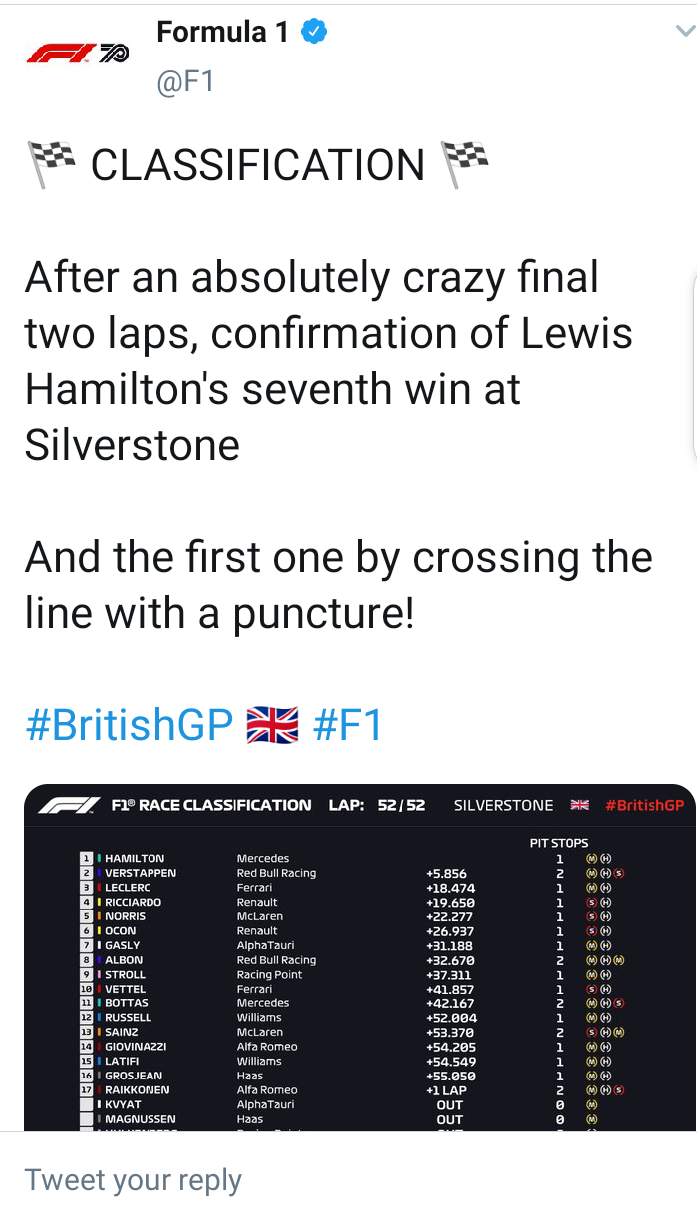 Hamilton speaking to repoeters after the win said in relief: “That was close.”

“Up until the last lap, everything was relatively smooth sailing.

“The tyres felt great. Valtteri was really pushing incredibly hard and I was doing some management of that tyre and he looked like he wasn’t doing any. “When (his) tyre went, everything seemed fine, so I was thinking maybe it was OK. And then just down the straight it deflated.

“I noticed the shape of the tyre shifting, and that was heart in the mouth and I didn’t know if it had gone down until I braked.

“Then just driving it – sometimes it will come off and break the wing. I nearly didn’t get round the last two corners. Maybe we should have stopped towards the end when we saw the delaminations (on the other cars).”

Hamilton said his engineer Peter Bonnington was counting down the gap to Verstappen over the radio as he neared the flag.

“The car seemed to turn OK through Maggotts and Becketts,” Hamilton said.
“And then it was a real struggle in the last two corners. I could hear the gap coming down from 19 to 10. I could hear out of the last corner him going: “Nine, eight, seven,” and I was just like: ‘Get back on the gas.'”