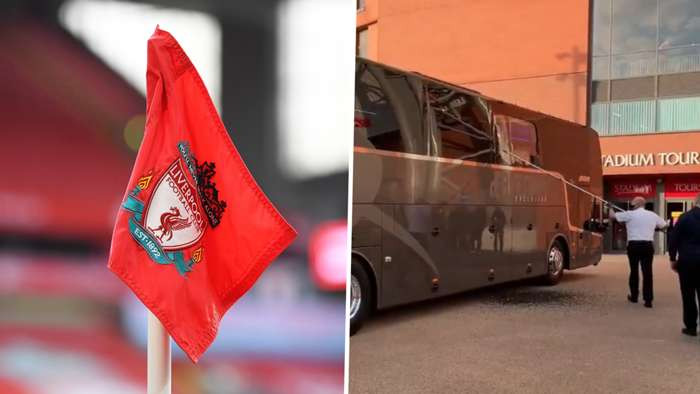 Real Madrid’s team bus has been damaged by Liverpool fans while on its route to Anfield for tonight’s crunch champions league clash between both clubs. Video footage and images show a broken window on the side of the luxury bus outside Liverpool’s home as stones and projectiles were launched towards the bus with one stone breaking the window facing the seat where club coach Zinedine Zidane sat. A video online shows Liverpool staff cleaning up a pile of broken glass with Merseyside Police officers in attendance after hundreds of Liverpool fans had earlier been spotted lining Anfield Road ahead of kick-off. Liverpool has now reacted to the incident.

A club spokesman said: “We condemn unequivocally the actions that led to Real Madrid’s team bus being damaged during its arrival to Anfield this evening

“It is totally unacceptable and shameful behaviour of a few individuals.

“We sincerely apologise to our visitors for any distress caused. We will work together with Merseyside Police to establish the facts and identify those responsible.”

Zinedine Zidane’s side headed to Liverpool’s home ground with a 3-1 aggregate lead from their first-leg in Madrid.

Real Madrid bus has been attacked by Scouses in Liverpool & a window where coach Zidane was sitting broke through stones being thrown.