An Asda employee fainted in front of Prince Charles during his visit to the supermarket distribution centre in Bristol on Thursday.

In a short video, the Prince of Wales is seen talking to the unnamed employee, before he sways back and forth and drops to the ground.

Charles, 71, puts out his arm to try and catch the man, as other colleagues shout and watch him fall backwards.

The employee received medical attention immediately and recovered quickly, with colleagues reassuring the Prince. It is not known why the man fainted.

Later on he is seen re-meeting the Prince, laughing and continuing the conversation, saying: “Thank you very much Sir”.

Camilla, Duchess of Cornwall, was also visiting the centre on the royal trip, but was not present when the man fainted.

The royal couple was keen to thank supermarket workers who have been at the frontline of the coronavirus pandemic.

Chris Tilly, general manager of the centre, said: “I think it’s fantastic that the prince and duchess have taken the time out to come and meet colleagues.

“Every single colleague that they saw they thanked for what they had done during the last 14 weeks, which I was truly humbled by.”

Although his wife was living in the same property – they separated so she did not become unwell.

Throughout the pandemic the royal family have continued engagements but were forced to do them remotely via video call or Zoom. 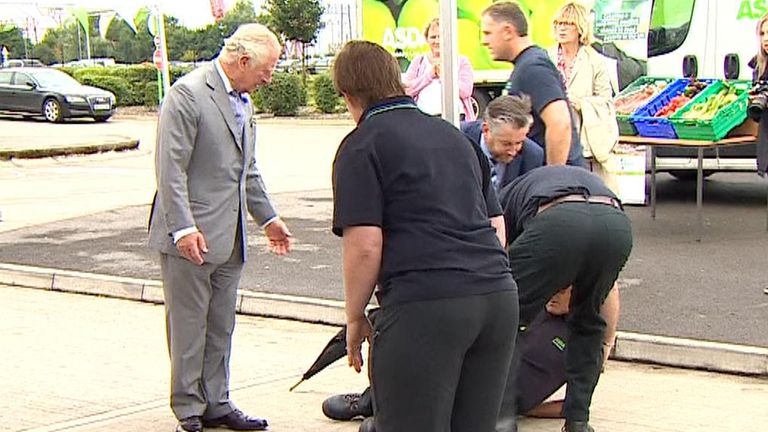 The Duke and Duchess of Cambridge were the first royals to resume in-person visits on 19 June with a trip to local independent businesses.

Prince William attended a bakery in King’s Lynn, near their home of Anmer Hall in Norfolk, and Kate Middleton went to a garden centre.

Hushpuppi calls 20 names of prominent Nigerians and others he works with.

Johnny Depp to get $301m deal with apology letter to return as Jack Sparrow?