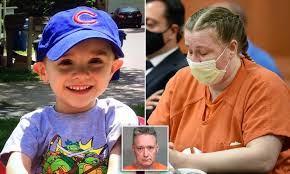 37-year-old JoAnn Cunningham has been sentenced to 35 years in prison for beating her son to death with shower head because he  soiled himself.

The mother who pleaded guilty to the first degree murder of her son Andrew “AJ” Freund in 2019, must serve 100% of the sentence and if released at age 72, must serve a further three years of mandatory supervised release and register as a felon who has committed violence against children.

Though the boy’s family had hoped for the maximum 60 years behind bars for the 41 separate charges Cunningham and her husband, Andrew Freund Sr, faced between them, Judge Robert Wilbrandt who delivered the sentence on Friday afternoon said his decision was based on the fact that the murder charge to which Cunningham pleaded guilty did not include the aggravating factors of the original charges.

The couple had called to report that their son was missing on April 18, 2019. While an investigation found no trace of the boy or of an abduction at home; the police did find squalid conditions, bags of used syringes, chains and locks on the windows and doors of AJ’s room and a combination lock on his closet.

A search of Cunningham’s phone unearthed a video which had been shot on March 4: “AJ is seen laying on a bare mattress in a crib in a room I recognized to be his bedroom,” Detective Edwin Maldonado of the McHenry County Sheriff’s Office, wrote in an affidavit. “In the video, a female with a voice consistent with JoAnn’s is holding the phone and videotaping. She is berating AJ for urinating on his bed.”

The officer said that in the video the child is naked except for bandages around his wrist and hips; he is covered in bruising, Action News Jax reported. When confronted with this video, police said Freund confessed and showed them the shallow grave where he had buried his son.

Fish seller buys herself a car as a gift as she completes her NYSC. How true is this?