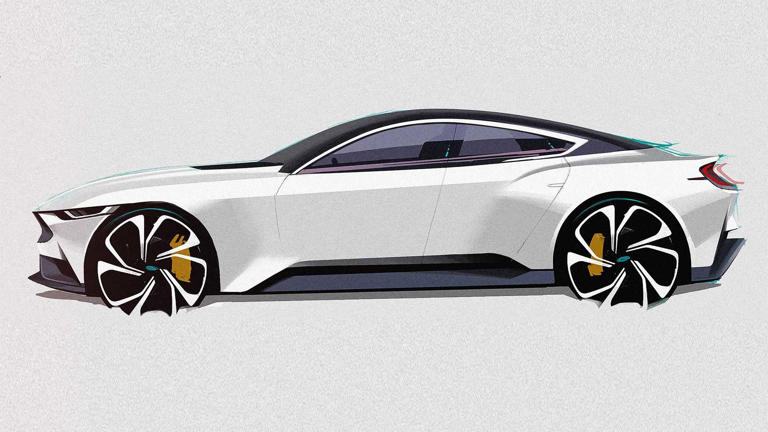 Ford introduced the seventh-generation Mustang yesterday, giving the iconic pony car a brand-new design inside and out. The automaker made other improvements to the car beyond its styling, like introducing the new Dark Horse performance variant. But official sketches from the Blue Oval depict at least one attractive alternative design for the car – a sleek four-door sedan.

The sketches come from Ford’s Christopher Stevens, the company’s senior exterior designer. The image with the sedan only has one illustration of the car – a profile view that clearly shows off the rear doors. The sedan retains the model’s iconic coupe-like shape, with the greenhouse’s fastback styling flowing into the short rear deck just like the two-door. The two-tone top helps hide the length, but the door handle in the rear fender haunch is hard to miss.

The existence of the Mustang Mach-E makes it seem as if a four-door Mustang sedan is possible, but building such a car as consumers continue to love their crossovers seems unlikely. The lone sketch sits among other compelling Mustang designs, with two drawings depicting the coupe with a Bugatti-like C-shaped motif around the doors.

The Mustang that Ford introduced yesterday has just two doors, with bold new styling at the front and rear fascias. Powering the redesigned Mustang will be an “all-new” 2.3-liter EcoBoost four-cylinder engine and a revamped 5.0-liter V8, which arrives with twin air boxes and two throttle bodies.

Ford decided that the only gearbox it will make available for the four-cylinder will be the automatic transmission, while those who want to row their own gears will have to upgrade to the V8-powered GT that’s available with both options. Manuals make up over 40 percent of GT ales.

The redesigned 2024 Ford Mustang will go on sale next summer, and we’re excited to see the variants it produces over its lifecycle. Ford set the bar high by launching its new Dark Horse trim right out of the gate, which could make around 500 horsepower (373 kilowatts) when it arrives. However, Ford has not announced the output numbers for the new Mustang models. Expect Ford to reveal the car’s performance numbers and pricing information closer to the car’s on-sale date in 2023.