One Major Side Effect of Eating Too Much Canned Tuna

Eat This, Not That! canned tunaFor many of us, our pantries are stocked to the gills with canned tuna. It’s both inexpensive and a good source of belly-filling protein. Plus, it requires no cooking, not even a plate—just a can opener and two slices of bread. Bingo! You have lunch, a snack, or dinner!

Since it’s such a convenient source of protein, you may find that you eat a lot of tuna now—three, four, five times a week, maybe? Depending on how much and, especially what kind of canned tuna you’re eating, you may be getting too much, potentially resulting in a fishy side effect called mercury poisoning. But before you dis fish, read on, and check out these 6 Ways Eating Fish Can Help You Lose Weight.

Canned tuna contains mercury, so eating too much of it can lead to mercury poisoning.

Consumption of ocean fish and shellfish accounts for more than 90% of human exposure to mercury in the United States, and tuna harvested in the Pacific Ocean accounts for 40% of this total exposure, according to a study in Environmental Health Perspectives.

Mercury in the air from coal-fired electricity generation and other human industrial activities settles in lakes, rivers, and oceans where it is consumed by marine life. But mercury in oceans is also a product of nature’s organic carbon decomposition, according to scientists reporting in the journal Global Biological Cycles. When mercury enters the water, either way, microorganisms transform it into a highly toxic form called methylmercury that builds up in the flesh of fish that we eat. Methylmercury bioaccumulates in larger predators, which is why bigger fish like tuna are riskier to eat than, say, sardines. (Related: The #1 Best Fish to Eat, According to a Dietitian. 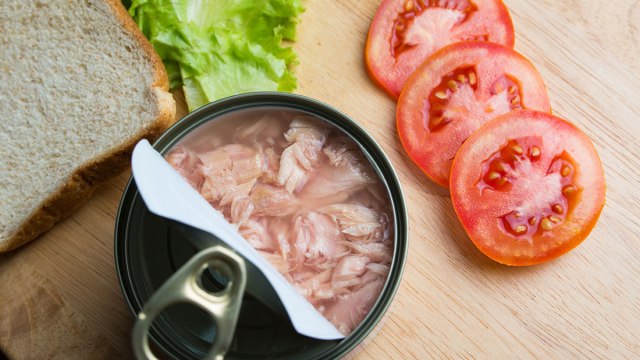 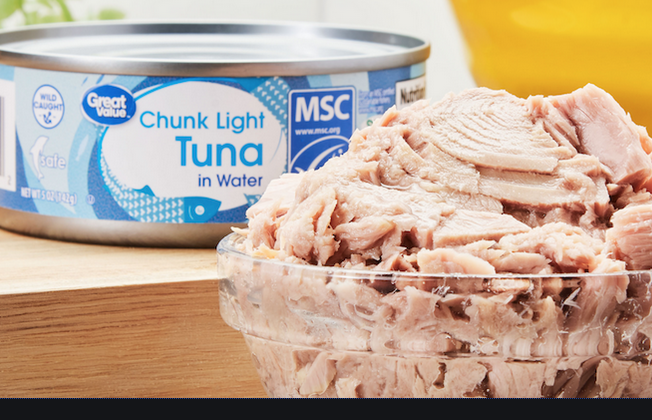 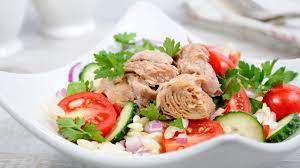 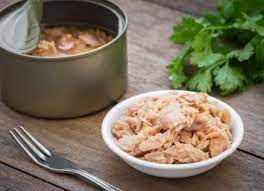 How it’s possible to get high levels of methylmercury in the body.

“All fish have some level of mercury, but that level varies widely; canned tuna has relatively high levels of mercury so its consumption could potentially become harmful above three or so servings a week,” says Andrea Paul, MD, medical advisor to Illuminate Labs.

Nearly everyone has a small amount of methylmercury in their blood that’s below levels that may trigger health effects, according to U.S. Centers for Disease Control and Prevention (CDC) data. But methylmercury is a powerful neurotoxin, so eating too much fish may result in mercury poisoning. Symptoms include itching or a pins-and-needles feeling in the toes and fingertips, muscle weakness, coordination, speech and hearing impairment, and reduced peripheral vision. High mercury levels in women who are pregnant may result in central nervous system disorders in their babies.

How to stay safe.

The Food&Drug Administration and Environmental Protection Agency recommend that women and children (over age 10) eat two to three servings (8 to 12 ounces) of a variety of fish and shellfish each week because seafood is a great source of omega-3 fatty acids, which are essential to healthy brain development. Both agencies recommend choosing low-mercury seafood and have created an advice chart showing how often to eat 60 different types of fish by designating them as either “best choices” (eat 2 to 3 times weekly), “good choices” (eat 1 serving per week) or “choices to avoid” (highlighting fish containing the highest levels of mercury).

But an environmental health advocacy organization called the Environmental Working Group says the government’s guidelines may put women at risk. In a nationwide study, EWG recruited 254 women of childbearing age from around the nation who reported eating as much or more fish as government suggestions. Researchers tested samples of their hair because mercury accumulates there and reflects the mercury level in the body. Nearly 30% of the women studied had over the EPA’s safe limit of mercury and almost 60% had more mercury than a stricter limit set by two European institutions. The EWG believes including canned light tuna on the “best choices” “lower-in-mercury” category is wrong since skipjack “is a significant source of mercury in women’s diets,” it says. Based on a food questionnaire, tuna contributed almost 40% of the mercury ingested by participants in the Mercury Policy Project study, the EWG says.

If you want to cut back on canned tuna, try salmon, a low-mercury fish on the FDA’s “best choices” list. And here’s a delicious recipe for a salmon fish taco bowl. Enjoy!

23 of the Most Beautiful Beaches in the World