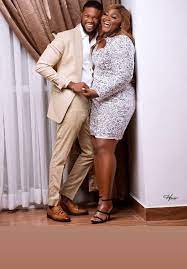 Actor Stan Nze has disclosed that people made fun of him for marrying 42-year-old co-entertainer, Jessica Obasi.

The actor in an interview with BBC Pidgin, said negative comments trailed their wedding and he got questioned for marrying a 42-year-old woman.

Nollywood actor Stan Nze has said he decided to marry Blessing Jessica Obasi because she gives him peace and she’s the one God created for him.

Speaking with BBC News Pidgin, Nze said he received a lot of negative comments from people who told him he married a 42-year-old woman.

According to the 32-year-old actor, his wife is his friend and she’s a hardworking woman with a good heart. 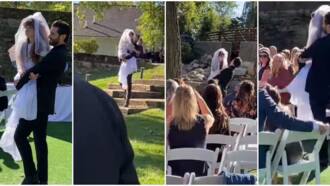 Nze said he wants to ensure that he and his wife do not have issue in the first year of their marriage.

“I’ve made up my mind that the first one year I want to have a record that I didn’t fight with my wife.”

“The joy on his face as he’s talking about his wife.”

“God bless you two, I like how u talk bout her.”

“Congratulations to them both.Hes a wonderful person.at the end of the day we should all do what makes us happy.no one has thr right to judge anyone’s choices coz you can never be in their shoes.i wish them well.”

“I am so happy for you guys, your wife is beautiful and she looks like a very nice lady and of course she is funny well well.”

“I wish them well, but I no wish to marry at 42 years ,I can’t afford to be going for my children PTA meeting at old age, may God help us all.”

“I love how he appreciates his wife. May this happiness last forever.”

Photos from the funeral of veteran actor, Baba Suwe