The Grillz Glozzary: 9 Styles You Should Know

Fresh off of giving HYPEBEAST the 101 on the commissioning, upkeep and investment in grillz, Helen Harris returns to show us a few of her favorite — and clients’ most-requested — styles of teeth jewelry.

The jeweler behind Helen with the Gold Teeth walks through classics like flats and honeycombs, as well as her signature butterfly gap fillers and french-tip diamond cuts.

“Flats” is shorthand for plain gold teeth. Harris says most people in New York ask for flats as is, though they can also be decorated with diamonds, enamel, or gems. “I make them differently to give them a more Southern look,” Harris explains. “This means you can actually see each individual tooth in the shape of a tooth. They’re made to look as much like permanent gold teeth as possible.”

Openface pieces, also sometimes referred to as “windows” frame the white front of the tooth with metal, decorating just the edges. “My signature look is called a thin open face,” Harris says, adding that these sorts of pieces are especially popular. “It’s an easy way to integrate gold teeth into your look without doing too much too quickly. It’s also just very pretty on the tooth, especially a longer tooth like the canine.”

“It’s a classic country look,” Harris says. “Usually when someone comes to me requesting diamond cuts they want a Southern or Midwestern feel — they want to make a bolder statement. They don’t want their gold teeth to be understated.” Diamond cuts give gold teeth an extra bit of shine — and drama — and the carvings can be done a number of different ways.

Another of Harris’s signatures is a “french tip”: the diamond cuts only decorate the top edge of the tooth and are often set off with rhodium to make it two-tone. “The French Tip is usually worn by a person who likes a lot of texture, sparkle and coverage in their mouth,” she says. “They usually mix the French Tip with some other pieces.” 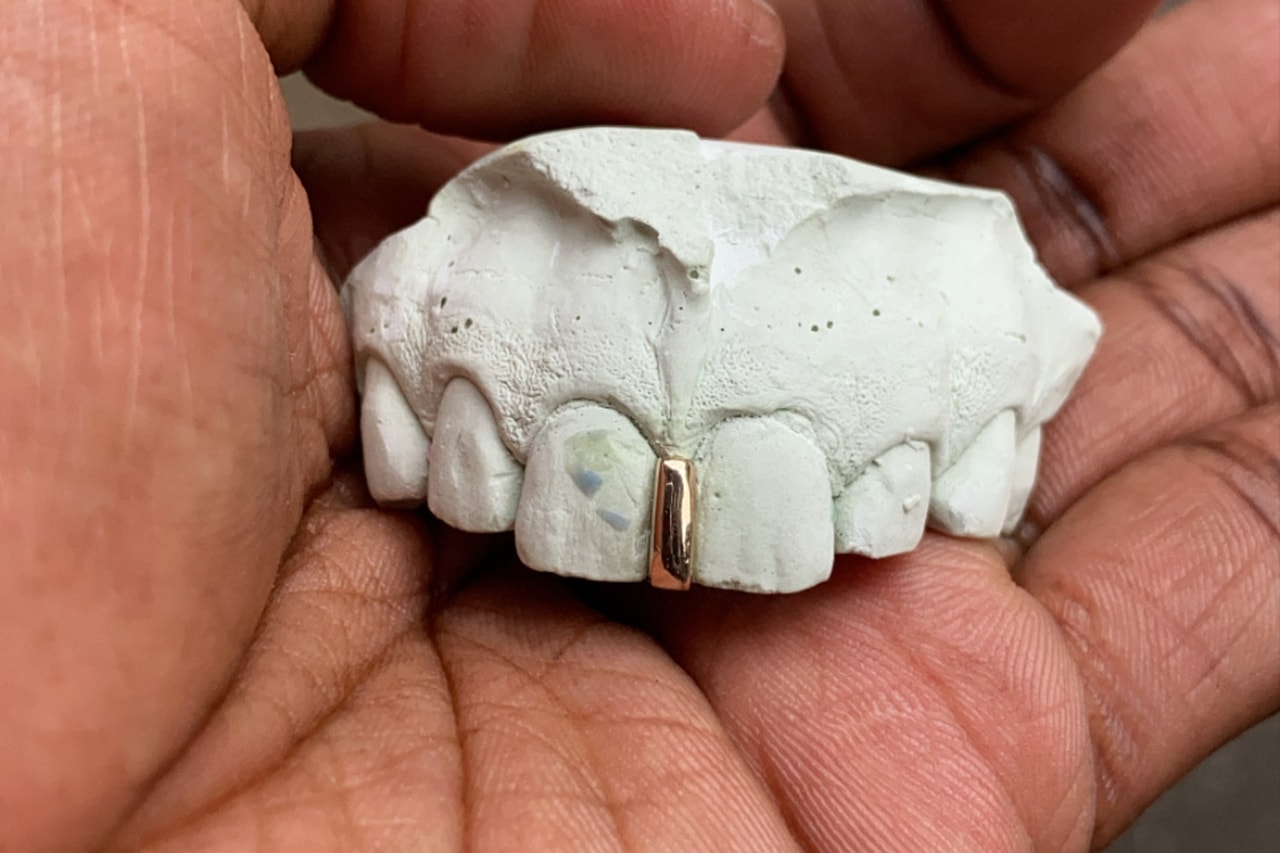 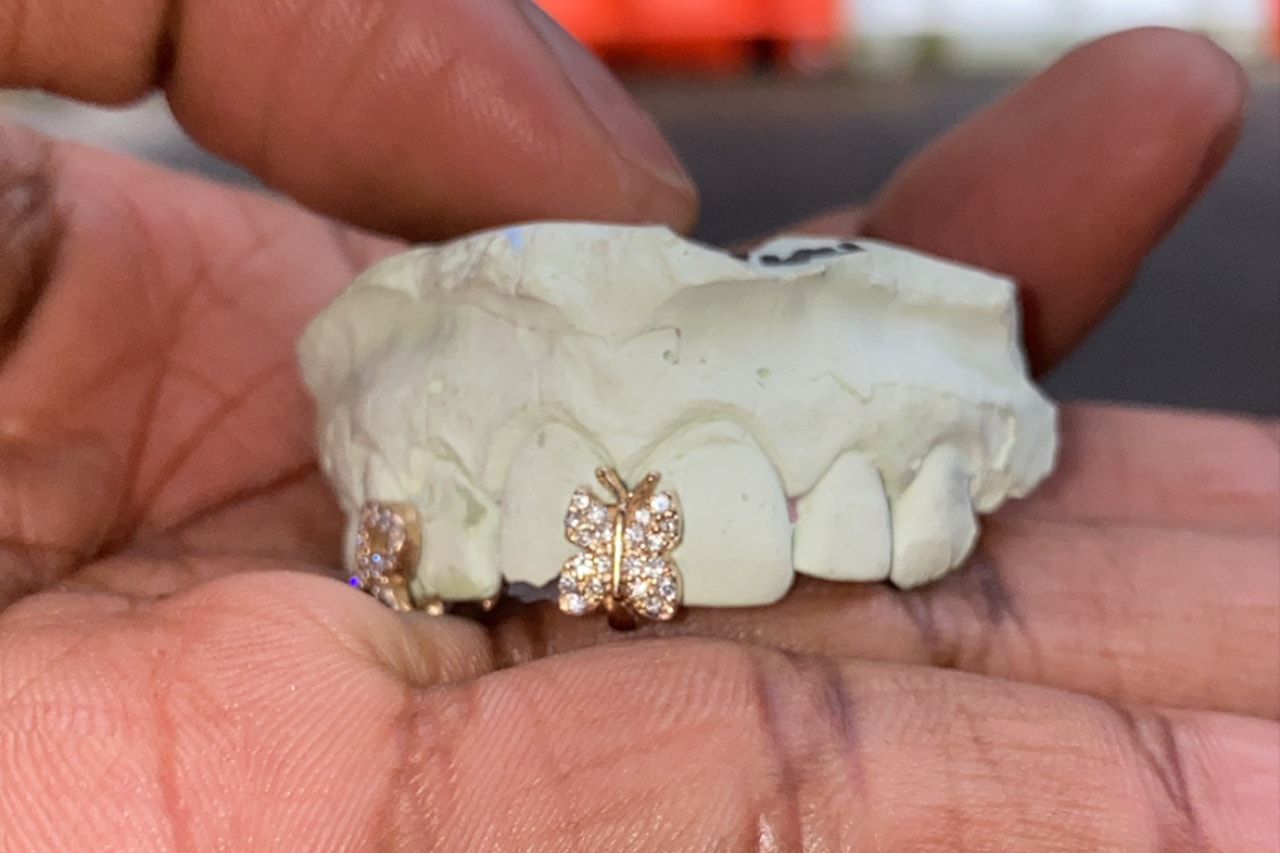 Gap fillers decorate the gap between two teeth — most often with a vertical bar. But Harris also does a popular butterfly gap filler, usually made of diamonds but she’s also made them with pink and purple stones. “This is usually purchased by someone with a more feminine taste in jewelry,” she says. “There was a while when people sort of identified me as the girly grill maker. I really appreciated the title (laughs).”

Harris’ jeweler and mentor originated the Teardrop: a simple but elegant look for those who might not feel as comfortable with traditional fronts. “This is usually something for a woman who wants to wear something unique for special occasions, to elevate their style or to just feel sexy,” she says.

“One of my stand out pieces that people often inquire about is the Pan African Flag enamel bottom I wear,” she says. “It’s red, black and green to symbolize Black liberation, empowerment and optimism as taught by Marcus Garvey.”

Opal is an especially popular choice for its bright, iridescent look. She also offers synthetic opal (a more affordable alternative), but she’s not certain she’ll continue to offer synthetic much longer. “I prefer to do authentic opal because I like the look of it better,” she says. “The quality of a natural stone is obviously higher and the range of possibilities is more exciting as opal comes in a lot of different shades.”

“I have some new work coming out that mixes pink opal, a dark blue opal, turquoise, malachite and amethyst. I’m hoping the client will also allow me to add some amber too,” she continues. “The sentimental value of the stone or what it symbolizes is usually what makes the buyer pick this style.

Harris’s most recent “floating letters” piece was commissioned by a client who had gotten into gardening during the COVID-19 quarantine.

“I think there’s a whole scene of writerly, Black women who are getting really into agriculture and being able to self-sustain. My client asked for a 14-karat white gold bottom in floating letters that says ‘GARDEN.’ I saw it as requested and found it underwhelming. I actually lost it while out photographing it. I changed the design without the client’s permission making it 18-karat yellow gold and added green enamel to it,” she explains. “My way was better and she was extremely satisfied.”

“From time to time, I get a client that wants to be totally dripped out,” Harris says. Enter the honeycomb setting, which sets very small diamonds into holes in the gold teeth. Harris’s highest quality diamonds are flawless and she offers down to CZ, also known as cubic zirconia. “I have definitely sold a couple of CZ pieces and they came out beautiful. The diamonds however are a lot more dramatic. There are a few different ways to set the stones, but most often what people want — especially in New York City — is a honeycomb setting.” 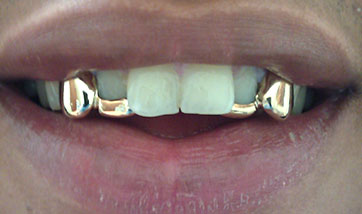