‘This is America’s day’: Biden inaugurated as 46th president, Harris sworn in as vice president 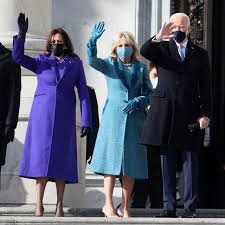 Michelle Obama’s belt stole the show on Inauguration Day
A Trump fan’s best-case scenario for the Biden era
‘This is America’s day’: Biden inaugurated as 46th president, Harris sworn in as vice president
President Joe Biden asserted that “democracy has prevailed” Wednesday after he was inaugurated the 46th president of the United States, calling for Americans to unite and confront the perilous challenges before them: a deadly coronavirus pandemic, economic turmoil and divisions over American leadership.

Biden takes the helm at a precarious moment in U.S. history, as the nation continues its struggle with a virus that has claimed more than 400,000 American lives. And he enters the White House amid fallout from a violent attack on the U.S. Capitol by a mob of supporters of former President Donald Trump, underscoring tensions in U.S. politics that Biden must navigate if he hopes to advance his ambitious agenda.

“This is America’s day. This is democracy’s day. A day of history and hope, of renewal and resolve,” Biden declared in his 21-minute inaugural address.

Standing on the steps of the Capitol, where rioters ransacked its hallowed halls just two weeks ago, Biden was sworn in by Chief Justice John Roberts in an austere ceremony stripped of much of its pomp and circumstance due to the pandemic. The otherwise ceremonial peaceful transfer of power had the feel of a war zone, ringed by large security fences near the National Mall with more than 25,000 National Guard members called in over security concerns after the Jan. 6 Capitol siege.

President Joe Biden gestures to stage members before delivering his inaugural address during the 2021 Presidential Inauguration of President Joe Biden and Vice President Kamala Harris at the U.S. Capitol.“Today, we celebrate the triumph, not of a candidate, but of a cause: The cause of democracy. The people – the will of the people – has been heard,” he continued. “We’ve learned again, that democracy is precious. Democracy is fragile. At this hour, my friends, democracy has prevailed.”

Despite the absence of cheering supporters, Biden struck a hopeful tone throughout his first address as president, hitting on his campaign theme of unity and vowing his “whole soul” is invested in trying to bring people together. Touching on an idea often raised by past presidents but largely missing over the past four years, Biden pledged to be a “president for all Americans,” fighting as hard for those who didn’t vote for him as those who did.

“We must end this uncivil war that pits red against blue,” he said, “rural versus urban, conservative versus liberal.”

Biden’s team made history before it even stepped into the White House: Vice President Kamala Harris was sworn in as the first woman, first Black American and first South Asian American to hold the office. Harris, the daughter of an Indian mother and a Jamaican father, was sworn in by Supreme Court Justice Sonia Sotomayor, a trailblazer in her own right as the first Latina on the high court.

As snow flurries filled the chilly Washington air, Biden thanked presidents from both parties for attending the event, absent his most recent predecessor.

Trump skipped the inauguration, breaking with more than 150 years of tradition, having left earlier in the day for Florida. Vice President Mike Pence and his wife Karen Pence did attend, along with other prominent figures – such as Sen. Ted Cruz, R-Texas, and House Minority Leader Kevin McCarthy, R-Calif. – who not only opposed Biden’s candidacy but also embraced Trump’s evidence-free claims of election fraud for weeks following the Nov. 3 election.

“You talked about the tension and division,” McCarthy said as he congratulated Biden and, along with Rep. Steny Hoyer, D-Md., presented a framed photograph of the inauguration as a gift. “Our task as leaders is to bind this nation’s wounds and dedicate ourselves to the values that all Americans share together.”

The former presidents and their spouses joined Biden and Harris in a solemn wreath-laying ceremony at the Tomb of the Unknown Soldier at Arlington National Cemetery, a stark reminder of how Trump remains a political outsider in the world’s most exclusive club.

Biden, 78, recited the oath of office over a five-inch-thick Bible that has been in his family since 1893. He went on to deliver remarks sharply different than those from Trump just four years ago, when he used his own inaugural address to paint a picture of “American carnage” and “empty talk” he said pervaded Washington.

Trump left the White House for his Mar-a-Lago club in Palm Beach, Florida, hours before Biden’s swearing in. Speaking for nine minutes at Joint Base Andrews in suburban Maryland, Trump wished Biden success – without using his name – and touted his administration’s accomplishments.

“I wish the new administration great luck and great success. I think they’ll have great success,” Trump told a few hundred supporters. “They have the foundation to do something really spectacular.”

Trump also once again flirted with his own future in politics.

President-elect Joe Biden on Jan. 19, 2021, in New Castle, Delaware.For Biden, the inauguration represented triumph over adversity and the payoff that can come with persistence. His 2020 bid for president was the third of his long career in Washington, including 36 years as a senator from Delaware and eight years as vice president under Obama.  Biden had held off on a presidential bid in 2016, noting his family’s grief after the death of his son, Beau Biden. The younger Biden, the former Delaware attorney general, died in 2015.

While the traditional inaugural parade from the U.S. Capitol to the White House was canceled over coronavirus concerns, Biden was set to march into the Oval Office to take part in another ritual for new presidents: Unwinding the work of the last guy. Aides said Biden will sign 15 orders on his first day, including: Resetting the U.S. relationship with the World Health Organization, rejoining the Paris climate accord and reversing travel restrictions on several predominately Muslim countries – among others.

“Together we shall write an American story of hope, not fear, of unity, not division,” he said. “May this be the story that guides us, the story that inspires us, and the story that tells ages yet to come that we answered the call of history. We met the moment.”