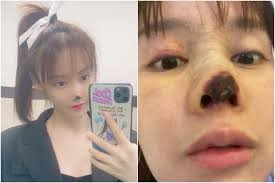 Chinese actress, Gao Liu has shared photos of her botched nose as she warned about the dangers of cosmetic surgery after her surgery went wrong.

Gao Liu is a singer and actress who has starred in multiple films and TV programmes in China. 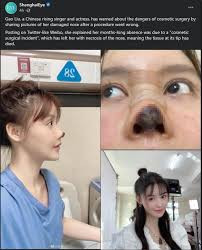 Posting to her 5 million followers on social media platform, Weibo, she explained her months-long absence from the industry was due to a “cosmetic surgical incident”, which has left her with necrosis of the nose, meaning the tissue at the tip of the nose has died. 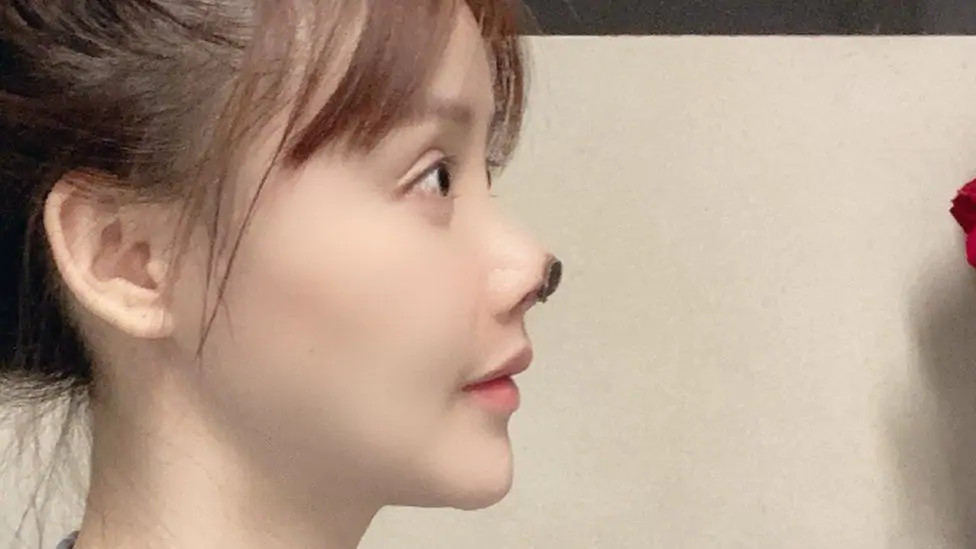 According to her, a friend of hers introduced her to a plastic surgeon at a clinic in the southern city of Guangzhou in October 2020.

The actress said she decided to go ahead with surgery on her nose due to suggestions she “get a slight trim”, and she thought that it would help boost her career. 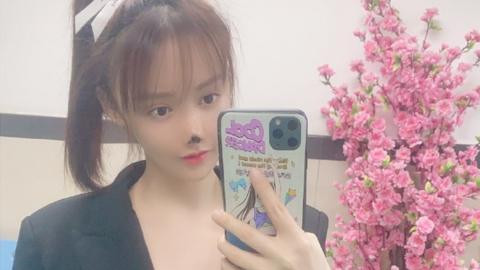 “The entire procedure lasted four hours. I thought that in these four hours, I would be made more beautiful,” she told her followers.

“I didn’t expect these four hours to be the beginning of a nightmare.”

She said that following the procedure, her nose felt “irritated and tingly” and then became repeatedly infected, even though she was told she would be able to go back to acting by December or January.

“The skin on the tip of my nose… became darker and darker, and my nose became necrotic,” she said, adding that she had thoughts of suicide.

According to her doctors told her it will not be possible to have follow-up, reconstructive surgery for at least a year, due to the extent of the damage.

News website, The Paper has shared public data from the Tianhe District Health Bureau in the city, showing the clinic where Ms Gao was treated had already received five administrative penalties between March and October 2020.

A number of complaints have also been made to the bureau about the clinic since Ms Gao shared her experience on social media.

The Chinese ministry of health says an investigation will occur.

Cosmetic surgery is very popular in China, to the extent that in 2004, the country hosted a beauty pageant specifically for those who had gone under the knife.