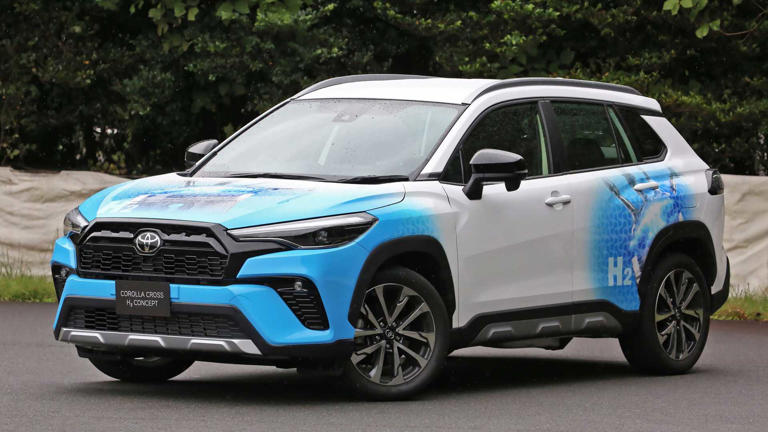 Toyota is also working on an Hilux pickup with a hydrogen fuel cell.

Toyota sees a future for hydrogen in vehicles, and not just as fuel cells for electric motors. The company has unveiled the Corolla Cross H2 Concept, equipped with an internal-combustion engine designed to burn hydrogen instead of gasoline or diesel.

It’s not just any combustion engine, either. Under the hood of this white and blue prototype is a version of the snarling 1.6-liter turbocharged three-cylinder used in the GR Corolla. If you follow Toyota in the racing scene, you’ll know that the Japanese automaker is running a hydrogen-powered GR Corolla in the Super Taikyu endurance series. Toyota also did a demonstration run in the World Rally Championship (WRC) with a hydrogen-fueled GR Yaris H2. Now, the experience gained through motorsports is transitioning to a road-going application in the Corolla Cross H2 Concept.

What kind of experience are we talking about? Toyota says it’s increased hydrogen combustion power by 24 percent, taking it to power levels similar to a comparable gasoline engine. Range is also up 30 percent, and refueling time in racing applications is down to just a minute and a half. That’s still an eternity in a race, but for a small five-passenger crossover, it’s a blink of an eye.

Of course, one doesn’t simply dump hydrogen into the tank of a normal Corolla Cross and call it a day. The H2 Concept carries a special tank using experience gained from the production-spec Mirai sedan, with the engine using high-pressure hydrogen direct injection tech. Real-world evaluation of this concept is underway, with winter testing in northern Japan beginning soon.

It’s all part of Toyota’s move towards carbon neutrality, a process that the automaker believes won’t be achieved through battery-electric vehicles alone. Development of an electric Toyota Hilux prototype using a hydrogen fuel cell was recently announced, utilizing second-generation fuel-cell technology borrowed from the Mirai.

A Future For Hydrogen?

In addition, Toyota will continue developing hybrid and plug-in hybrid models as well as electric vehicles for its future lineup. However, the automaker states it’s presently not possible to say for certain whether hydrogen systems will ultimately see maturity on road-going vehicles.

FIRSTBANK DECEMBERISSAVYBE: IF YOUR DECEMBER IS NOT VYBING, YOU AREN’T IN DECEMBER