Five persons have lost their lives after a boat they were commuting in capsized along the Ikorodu Channel of the Lagos State Waterways at about 8pm on Friday. July 3. 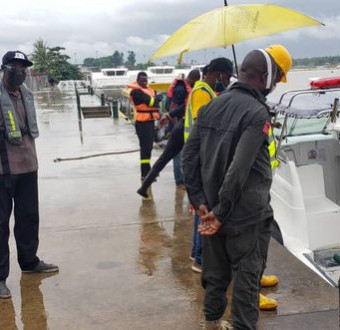 ccording to the Lagos State Inland Waterways Authority, (LASWA), the incident which could have been avoided, occurred after a 20 passenger capacity commercial ferry carried 21 passengers and took off illegally from Èbúté ?r? Jetty at about few minutes past 8.00 pm and headed towards Ikorodu.

The ferry then ran into an unforeseen object on the waterways, causing the boat to capsize. LASWA said while rescue efforts were said to have commenced immediately, only 16 were saved while five others died and one is still in a critical condition.

Commenting on the incident, the state Commissioner for Transportation, Dr. Frederic Oladeinde, said the violators of the law will be prosecuted as the unfortunate incident is already under investigation. He urged Ferry Operators to desist from breaking the laid down safety guidelines to avoid incidents of this nature. He said if the rule of no night travelling on the waterways from 6.00pm had been strictly adhered to by operators, the accident could not have occurred