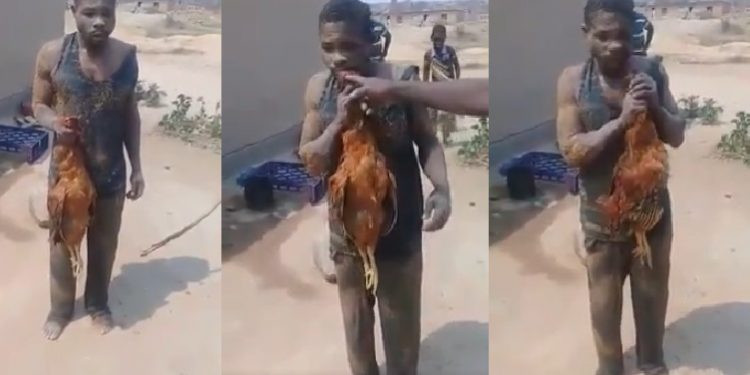 A chicken thief was handed an instant justice by an angry mob in Zimbabwe after being caught red-handed stealing a chicken.

The man who hid the chicken in his jacket was exposed after the dying chicken made an unusual sounds inside his jacket. A mob gathered after he was caught, and forced him to eat the chicken raw as punishment for the theft.

A voice was heard in the background telling him that since he stole the chicken with the intention of eating it, he might as well do so now. In the video, the thief can be seen biting off the cock’s head.

A news source reported that the suspect only managed to eat the chicken head before he started vomiting.

“Your ministry will be greater in prison” – Colleague sends his love and prayers to Ghanaian pastor who brutally murdered his wife, blames Satan

I can swear Olori Ajoke didn’t have an affair with KWAM 1 – Wife of Alaafin of Oyo, Olori Folashade Adeyemi says

Girl, 10, raped and killed while on her way to church, Comedienne Princess reveals…