Correctional Officer arrested in Kogi over missing rifles and ammunition

By effizziemag On Jul 28, 2022
A man is arrested by the police for looting on the fourth day of a nationwide strike against the removal of the petrol subsidy in Lagos January 12, 2012. Tens of thousands of Nigerians have been protesting up and down Africa's most populous nation for four straight days in protest against the axing of the petrol subsidy, which more than doubled the price to around 150 naira ($0.93) per litre. REUTERS/Akintunde Akinleye (NIGERIA - Tags: CIVIL UNREST POLITICS ENERGY)
0
Share 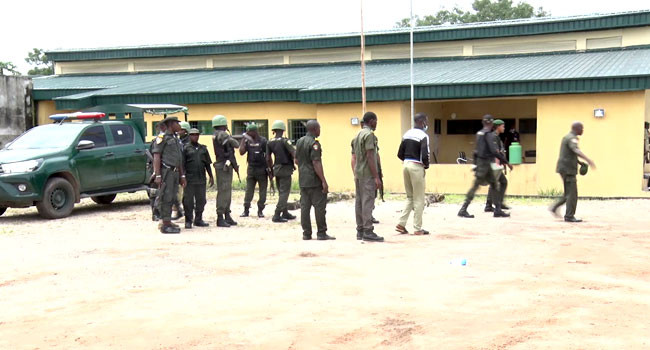 The Controller of Corrections, Kogi State Command, David Igbago, has ordered the immediate arrest of an officer of the Command for complicity in the disappearance of two rifles and some quantities of ammunition belonging to the Command.

A statement released by DCS Nihi Sesan, the Command’s Public Relations Officer,  in Abuja on Wednesday, July 27, did not mention the name of the suspect.

It, however, said the officer had been put through an administrative mechanism before being handed over to the relevant security agency for further interrogation.

The statement added that the missing items were discovered during a routine monthly audit of arms and ammunition in the Command’s armoury.

Igbago vowed to ensure that no stone is left unturned in unravelling the circumstances surrounding the criminal act and bringing the culprits to justice.

He also assured members of the public of his irrevocable commitment to the security of Kogi State in general and the Custodial Centres in the state in particular.