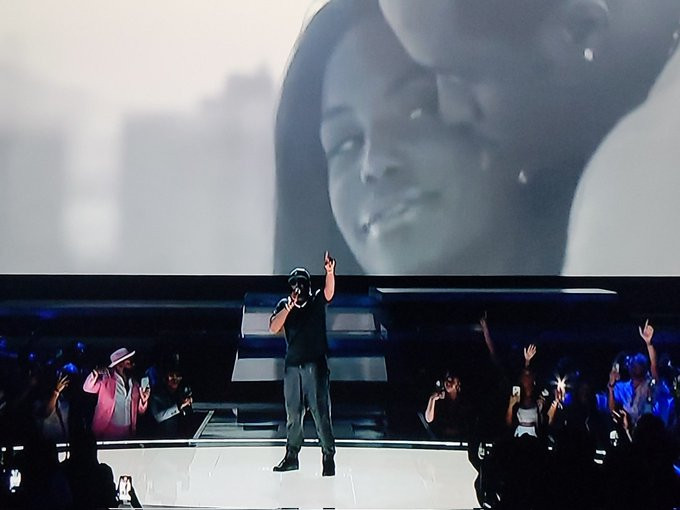 While being honored with the Lifetime Achievement Award at the 2022 BET Awards in Los Angeles on Sunday, the rapper, 52, gave special shout-outs to Porter, who died unexpectedly of lobar pneumonia in 2018 at age 47.

After several star-studded performances to celebrate the rapper’s career, Diddy played an old video clip of Porter telling him, “Congratulations, Puffy, you’re a star. I can’t tell you how proud I am. From Harlem to Hollywood, that’s a long journey … You work so hard, and I’ve watched you, your blood sweat and tears, and you’ve arrived.”

I’ll Be Missing You – *Every Breath You Take* pic.twitter.com/0rYXVI6sTY

Sweet home videos of their children, son King, 24, and twins Jessie James and D’Lila Star, 15, were also featured in a montage.

Before performing “I’ll Be Missing You” with Faith Evans and Maverick City Choir, Diddy said, “Baby girl, this is for you.” During the performance, Diddy yelled out, “I miss you so much, baby.”

The artists who paid homage to Diddy’s career were Jodeci, Mary J. Blige, The Lox and Lil’ Kim. Diddy also performed “I Need a Girl,” “Pass the Cîroc” with Busta Rhymes,” and “Gotta Move On” with Bryson Tiller.

After the performances, Kanye West and Kenneth “Babyface” Edmonds presented Diddy with his award. While accepting the honor, Diddy said, “I just miss Kim y’all.” “Stay connected to God, and he’ll bring you out,” he said. “I just want to say thank you to Kim.”

He went on to thank “everyone who played a part in my life,” including ex Cassie who brought him out of the “dark times.”

BET’s Lifetime Achievement Award honors those “who have not only significantly shaped culture through their extensive careers, but who have also been transformative leaders that consistently inspire generations by setting a true standard of excellence,” according to a press release.

How 7-year-old boy broke into house in Ibadan, cooked rice, ate all the meat in pot, drank milk then stole two phones and N4,000