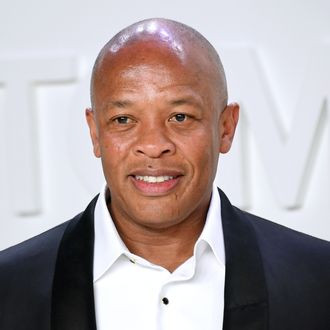 The rapper and producer whose real name is Andre Young, was reportedly rushed by ambulance to the medical center’s intensive care unit on Monday. Though TMZ reports that Dre is “stable and lucid,” further details of his condition were not given.

55-year-old Dre on Tuesday night, issued a statement addressed to his friends, family and fans on social media. He wrote;

“Thanks to my family, friends and fans for their interest and well wishes. I’m doing great and getting excellent care from my medical team. I will be out of the hospital and back home soon. Shout out to all the great medical professionals at Cedars. One Love!!”

The rapper and producer is currently going through a divorce from his estranged wife, Nicole Young, and is due for a hearing on Wednesday January 6. Young filed for divorce in June 2020, citing irreconcilable differences. The couple married in 1996 and have two adult children together.

Dre is widely regarded as one of the top earners in hip-hop, surpassing Sean “Diddy” Combs when Beats Electronics, the company he launched in 2008 alongside longtime friend and collaborator Jimmy Iovine, was sold to Apple for $3 billion in 2014. The former co-owner of Death Row Records and N.W.A co-founder also produced the 2015 N.W.A biopic “Straight Outta Compton.”

As a musician, the 55-year old hip-hop legend’s hits include the Grammy-winning “Let Me Ride,” “Nuthin’ but a ‘G’ Thang” “and “Forgot About Dre,” released between 1992 and 2001. His work with Eminem has been consistent through the decades, with Dre’s most recent song credit appearing on the 2020 album “Music To Be Murdered By – Side B,” where Dre raps on “Guns Blazing” and also served as a co-producer for another track. Throughout his career, Dr. Dre has produced tracks for a multitude of artists including Gwen Stefani, Mary J. Blige, Snoop Dogg and 50 Cent, among others.