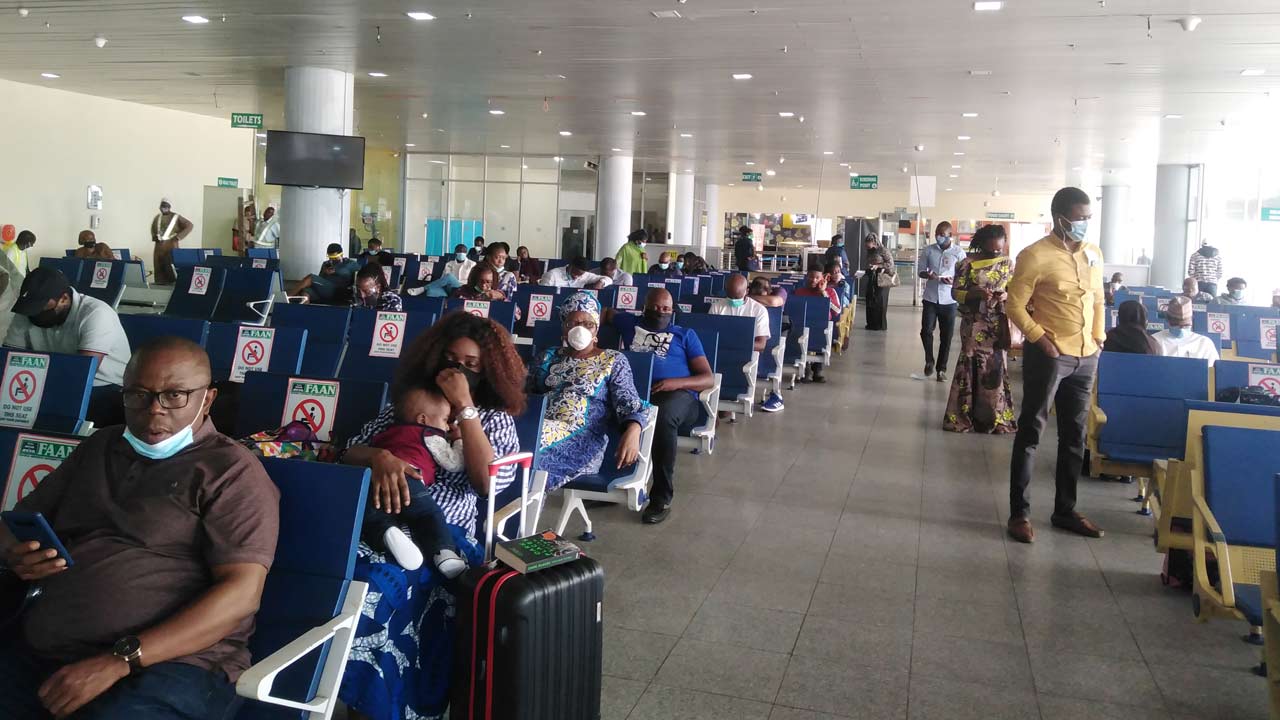 • Dana, Aero Contractors join today
• NCAA okays all eight airlines, more airports for reopeningIt was a fairly impressive turnout at both Lagos and Abuja local airports, yesterday, as four of the eight operating local airlines restarted operations with an average load factor of 70 per cent.

Although it was not as busy as the pre-COVID-19 air traffic that attended morning peak periods, air passengers began to funnel into the Murtala Muhammed Airport terminal II (MMA2) and the General Aviation Terminal (GAT), both in Lagos from 5:00 a.m., to once again hit the skies, after three months of COVID-19 restrictions.

Following stringent health and security protocol, the first flight on Arik Air dispatched before 8:00 a.m., with 60 per cent capacity. Air Peace airline’s first flight departed at 11:46 a.m. with over 75 per cent capacity. Ibom Air also followed with about 80 passengers on board while Max Air subsequently boarded, also in the Abuja direction.

By and large, it was a huge sigh of relief for many hitherto stranded air travellers. It was also a beacon of hope for both operators and regulators in the COVID-19 era and its new normal.

Findings by The Guardian showed that majority of the travellers fully cooperated with the health authorities and complied with the facemask, screening and physical distancing rules.

A passenger and businessman, Akin Abayomi, said it was with immense joy he was returning to his family in Kogi State after being stranded in Lagos since April.

“For me, the new normal is no big deal. I just want to fly and return home safely. I am impressed with what I have seen on ground. I hope they will keep it up,” Abayomi said.

Spokesperson of Arik Air, Banji Ola, described passengers’ cooperation as impressive and a good reward for the high level of awareness that had been created before the resumption of flights.

Ola disclosed that Arik scheduled three flights out of Lagos for the opening day. The first recorded 60 per cent, second and third were within 70 per cent load factor. The return legs also hovered around the 70 per cent average.

Communication Manager of Air Peace, Stanley Olisa, also informed that the carrier scheduled three flights to and fro the Lagos-Abuja route, and their first had a total of 103 passengers.

The airline was, however, more particular about online booking, online check-in and temperature gauge.

“If your temperature reads above 37 degrees, you’ll be denied boarding. No loitering on the aisle of the aircraft. Hands must be sanitised and no more meals on board. This is to reduce crew-passenger contact. Flying will be somewhat different but we can guarantee your safety,” Olisa said.

However, none of the passengers, The Guardian learnt, showed any sign of illness.Following the good opening day, two more airlines, Dana Air and Aero Contractors, will join the fray this morning. Overland Airways will open on Saturday.

Managing Director of Aero Contractors, Capt. Ado Sanusi, told The Guardian yesterday that his airline was scheduled to restart flight operations today as part of regulatory initiative, not to choke the system with all airlines restarting at the same time.

Ado said contrary to some media reports that indicated the airline was denied approval to operate; it had received approval from the Nigerian Civil Aviation Authority (NCAA).

“Based on the protocol and NCAA regulation in cognisance of the new airport facilitation and COVID-19 protocol, we decided to restart our operation a day after, to stagger the flight schedule.”

Meanwhile, the NCAA said almost all operators were ready for safe resumption, though cited varying levels of compliance. Director General of the apex regulatory body, Capt. Musa Nuhu, at a webinar forum with stakeholders early yesterday said all the eight airlines were on course, only that they all could not at once get the clearance to resume operations. Nuhu said as the reopening progresses, and without incidences, more airports would open and more airlines would return to the skies. He commended Arik Air for going beyond the minimum requirements to earn the nod for a restart.

“The airline fulfills the COVID-19 safety protocol for both passengers and staff by acquiring in sufficient quantities, Personal Protective Equipment (PPE) and the personnel training in accordance with advisories from ICAO- CART, WHO and IATA.

“All the airports concerned in the initial reopening scored 94 per cent each; indicating they’re all good to go. Murtala Muhammed Airport terminal two, Lagos, 94 per cent, Malam Aminu Kano International Airport (MAKIA) Kano 94 per cent, Nnamdi Azikiwe International Airport (NAIA), Abuja 94 per cent. The ground handlers made an impressive showing with good scores. NAHCO was singled out for conduction training for about 2000 of its personnel so to be compliant with the new normal.”