GOOD NEWS! As Judge rules that a landlord’s outstanding electricity bill or that of previous tenant can’t be enforced on a new tenant; Abuja Electricity Distribution reacts. 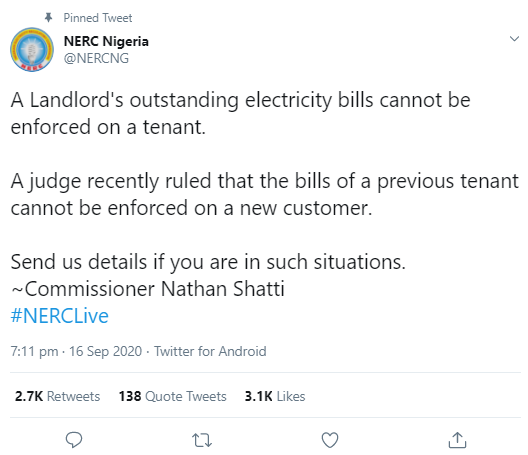 Nigeria Electricity Regulatory Commission has announced that a landlord’s outstanding electricity bill or that of the previous tenant can’t be enforced on a new tenant, according to a judge ruling.

NERC wrote on Twitter: “A Landlord’s outstanding electricity bills cannot be enforced on a tenant.

“A judge recently ruled that the bills of a previous tenant cannot be enforced on a new customer.

“Send us details if you are in such situations. ~Commissioner Nathan Shatti.”

Nigerians reacted to this revelation asking if the judge’s ruling will be applied.

One Twitter user wrote: “Why is @NERCNG saying one thing and DICSO @AEDCELECTRICITY doing another? Are we not being scammed? ”

And Abuja Electricity Distribution gave a contradictory reply via its official Twitter account @AEDCELECTRICITY, writing: “Hello, please be informed that once a property has accrued debts on the account. It continues to reflect until it is cleared. However, the tenants is supposed to have a discussion with the Landlord on how to clear off their outstanding debt.”

A Twitter user responded to Abuja Electricity Distribution, writing: “Do you even know what you are saying? There was a ruling and you are saying your own. Are you the judge?” 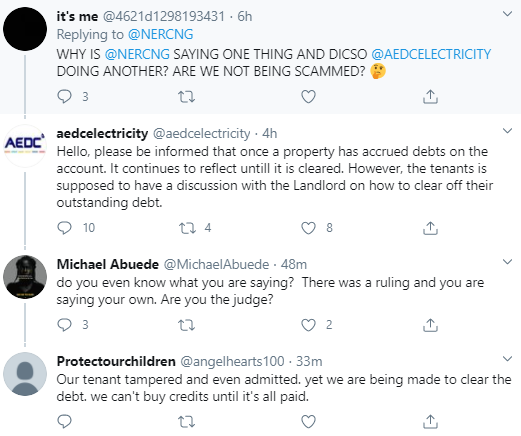 Why HashiCorp’s cofounders turned down a $50 million early payday

Ethereum, the world’s second-largest cryptocurrency, soars above $4,000 for the…