Graphic: Body of missing 7-year-old boy found floating on the bank of a river in Delta state 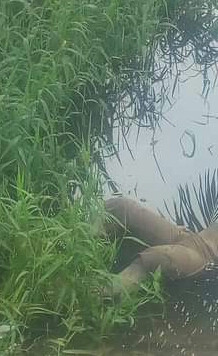 The body of a 7-year-old missing boy, Fejiro Emoavworhe, was found floating on the bank of Ohovwe river in Ekiugbo, Ughelli North local government area of Delta State on Monday Otober 12.

The deceased had gone missing since Sunday, October 4, according to the parents.

Father of the boy, Mr John Emoavworhe, who lives in Ogbeode Street, Ekiugbo-Ughelli, said he has lived in the community for only four months.

According to Mr Emoavworhe, his brother- in-law came to his house on the eve of Sunday with slices of fried yam, ice cream and soft drinks for his children.
He said that Fejiro, who was crying for ice cream outside, was called by a man with a white dress, promising to buy him the ice-cream.

“While we were still searching for Fejiro, my brother in-law left the compound in hurry and when he was called upon by the family the following morning, he said he was going to church and later came to meet my family at about 7.00pm,” said the grieving father.

“My wife’s younger brother told my family that he did not know anything about Fejiro’s disappearance but that he heard my neighbours saying that I used to beat my children and drive them out of home, that this time around I will look for my child.”

The remains of the boy have been deposited at an undisclosed morgue in Ughelli while team of doctors is carrying out the autopsy.

At least one police officer dies, others injured in accident in Akure (graphic photos)