A gunman who shot and killed a woman on City Island, New York on Wednesday April 14, has been struck by the lover of the woman, who after watching the slaying, hopped into his car and mowed down the shooter as he tried to escape on a bike, police has revealed.

Lizbeth Mass, 52, was working as a flagger on a construction site in Bronx island, when the shooter unloaded a barrage of bullets at her about 12:30 p.m., cops said.

Neighbors said the shooter brought lunch to Lizbeth Mass nearly every day, and that his only relationship with Mass was that he brought her food.

The victim was part of a work crew replacing a water main near City Island Ave and City Island Road. 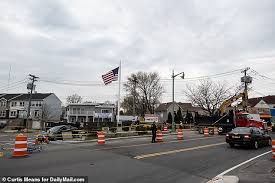 The 66-year-old gunman exchanged words with the victim before he started shooting, then tried to pedal away on a bicycle.

But Mass’ boyfriend, 58, who had stopped by to see her, witnessed the shooting and then got into his Hyundai Sonata and ran the gunman down, police said.

Medics then took Mass to a Hospital, but she had lost too much blood and gave up the ghost..

“Everyone in the neighborhood knew her,” a neighbor to Mass said.

“I would see her when I would walk my dog around 4:30 in the morning, when she would park her car. She was a very sweet and beautiful woman.”

The gunman was taken into custody, and his weapon was recovered, cops said.

He was also taken to hospital for treatment of body trauma. Charges against him are still pending.