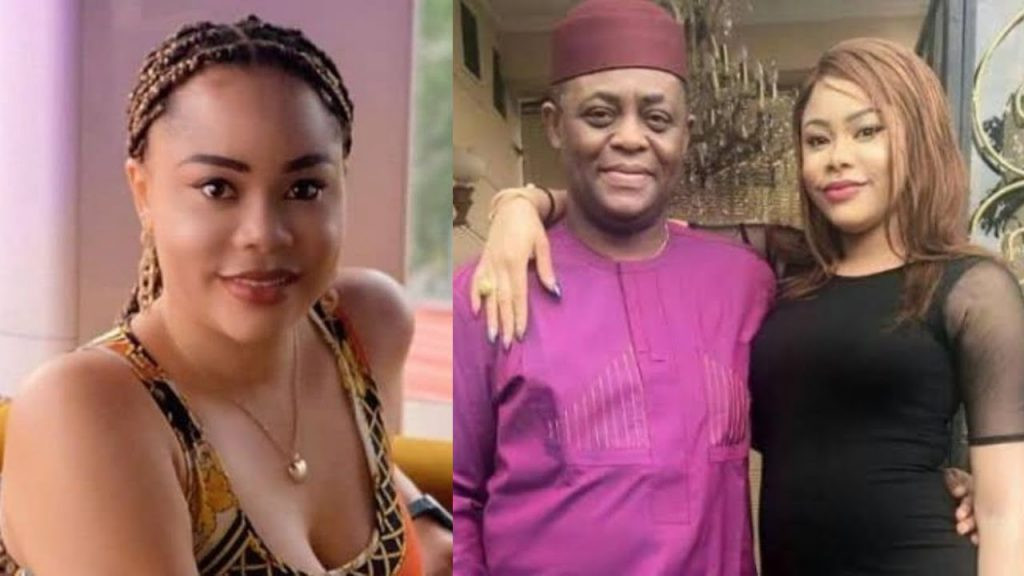 Precious Chikwendu has narrated how she was allegedly unable to consummate her marriage for 6 years because former Minister of Aviation, Femi Fani-Kayode allegedly had erectile dysfunction.

In a lawsuit filed before a Customary Court in the Federal Capital Territory (FCT), Abuja, Precious said the four children she had with Fani-Kayode were conceived via artificial insemination.

Alleging that the former minister did not perform any rites before their marriage nor paid her bride price, the mother of four further claimed she was forced to be celibate during the time they were together as a couple.

“At every attempt, the petitioner made to have sexual intercourse with the respondent, there was never erection of the respondent’s penis/manhood and penetration was frustrating.

“During such periods of frustration and sexual desire, the petitioner would be left with the choice of merely rubbing herself on the respondent, to have the slightest bit of relief.

“The petitioner then insisted parties should seek medical help for the respondent, and on visiting the family doctor, the respondent claimed he was diagnosed of having a cyst on his penis/manhood, which is not allowing the respondent to have erection and or perform sexually,

“The respondent was supposedly placed on cyprotab and the doctor suggested that the respondent should go and decide when he wishes to remove/untangle the cyst.

“Few days after the visit to the doctor, the respondent informed the petitioner that he had discussed with Regina and she had prayed over it, that the respondent should not do the operation, else he would die.

Precious who alleged that FFK assaulted her during their time together as a couple and also lied to her that his marriage to his third wife had ended, asked the court to declare that she was never married to the former minister.

In suit no FCT/CCK8/01/043/2021, which was filed by her counsel, Mr Abiodun E. Olusanya, Precious sought for the following reliefs;

“An order declaring that there was no customary marriage between the petitioner and the respondent (despite their six-year cohabitation) under the Nanka, Orumba North, Anambra State of Igbo native law and customs.

“Alternatively, assuming by the evidence during the trial the court finds that there was a customary marriage between parties:

“An order dissolving the customary marriage between the petitioner and the respondent forthwith.

“An order granting the petitioner access to and custody of the four children of the cohabitation between parties especially during their academic calendar.

“An order ordering the respondent to be continuously responsible for the academic, medical, clothing and welfare of the four children of the cohabitation.

“An order ordering the respondent to release and return the Petitioner’s property.”

Some of the properties she is asking for include her certificates and documents, trophies from the United Nations pageantry, Red Range Rover SUV registered under her foundation’s name and the foundation’s certificates, her photos, her mother’s burial videos and souvenirs, her mother’s certificates and documents, her clothes and personal belongings including gadgets, sewing machines left at the children’s play area and her refrigerator and kitchen gadgets for her food company, Mommy Pee Food.

Precious who insisted that there was never a marriage, alleged that FFK “continuously behaved in such a way that she cannot reasonably be expected to continue to live with the respondent any further or formally enter into any form of traditional marriage with him.”

She claimed that their relationship was filled with “woes, lies, deceits, quarrels, assaults, battery and domestic violence, lack of trust and absence of love, public disgrace and shame, and absence of sex due to the inability to sexually perform and intolerable behaviour of the respondent.”

The mother of four added;

“From the inception of the cohabitation, the Respondent has been a violent person who attacks the Petitioner and her family members at will without provocation.”

Precious revealed that she found FFK’s marriage certificate with his third wife, Regina, after the Economic and Financial Crimes Commission (EFCC) raided his house in 2016.

She disclosed that he allegedly confessed to not being divorced from Regina after she confronted him and demanded to see their divorce certificate.

The mother of four added that after she walked out of the cohabitation with the respondent in August 2020, she has continuously been denied access to her children and her children have been continuously deprived parental motherly care and protection.

She also claimed that Fani-Kayode was in the habit of not paying his domestic staff/workers/nannies, “which leaves the workers angry and they could unleash and or transfer their anger on the children, they may kill any of the children any day, if the children are left with the respondent.”

“Most of the domestic staff/workers/nannies that are not paid their wages, usually resign and run away without informing anyone and considering the security situation, the workers could kidnap any of the children.

“Currently the respondent is in court with some of the former domestic staff/workers for noa payment of salaries and abuse.”

FFK is yet to file a response to the claim.