The police in Lagos state have arrested a man for allegedly raping 13-year-old girl, Favour Okechukwu, pictured above, to death in the Ejigbo area of the state on Wednesday, September 30.

According to a statement released by the spokesperson of the state police command, SP Olumuyiwa Adejobi, Favour was sent on an errand by her mother to go and buy a carton of Gala for her at Olanrewaju street, Ejigbo at about 8.30pm.

”When Favor did not return on time, a search party was raised to look for her, till when her father came back from work and himself started looking for the girl.  Later information got to them that a girl had been raped to death at No.4, Olanrewaju street Ejigbo. On getting there, the body of  Favor Okechukwu was found dead in a room that belongs to one Ajom  Brimcewil Tabi at No.4, Olanrewaju street, Ejigbo, Lagos. The body was found stark naked with blood flowing out of her private part. ” Adejobi said

The spokesperson added that the said Brimcewil Tabi has been arrested and is currently in detention. He stated that the state Commissioner of police, Hakeem Odumosu, has ordered a thorough Investigation into the case.

Meanwhile, actress Hilda Dokubu has taken to social media to demanded justice for Favour. A post shared by her on her IG page reads

”On the 30th Sept 2020, about 3pm, Favour was gang-raped to death around Ejigbo area, Lagos State. She would have been 12 years on the 21st October.

On the day Favour was raped, she was running errands for her nursing mother. Upon gang-raping her to a state of unconsciousness, the boys engaged a quack nurse to check her. @wrahpnigeria led @actionaidnigeria to meet with her parents today.

Whist we cannot confirm if the nurse administered any treatment on her, @ActionAidNigeria will ensure the quack nurse, the young men and all others involved in this dastard act are brought to book. We will ensure #Justice4Favour.

Our daughters MUST feel safe to walk on the street. @actionaidnigeria will continue to work with relevant stakeholders to make our cities, our nation safe for women and girls.

What is all this? Why? why? why?
I promised myself to stay extremely joyful the rest of the year, especially this month of my birth! But this is so depressing! This is deep seated wickedness!
I know why I am tagged on this post and yes we all need to stand up against RAPE and all forms of gender based violence and abuse
They must pay for the gruesome murder of this child.
I join @Actionaid in the call for #justiceforfavour” 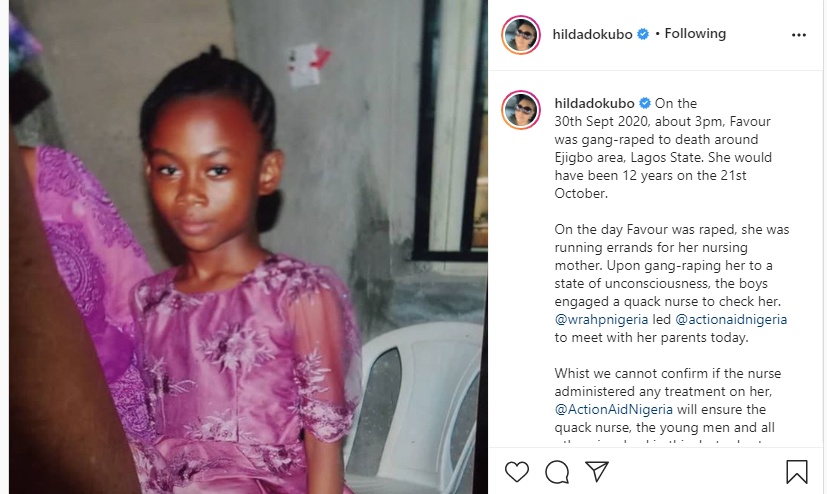