By effizziemag On Apr 17, 2021
In an effort to curb gun violence, Seattle police are now following up in person on court orders requiring people to surrender guns.
0
Share

The routine has become so predictable that some gun-control activists see the familiarity of tragedy as their biggest obstacle to achieving the change they’ve been seeking for the past decade.

A gunman’s rampage that claimed eight lives Thursday in Indianapolis became the latest mass shooting to set off the well-known pattern of condolences, lowered flags and a somber presidential statement calling on Congress to act.

With the cycle typically ending in legislative gridlock before repeating itself, activists are seizing on the most recent spate of deadly shootings to try to disrupt the system.

“God help us if we ever become complacent, or if this should ever just become routine and we just look the other way,” said Mark Barden, a co-founder of the gun violence prevention group Sandy Hook Promise. “I do believe that we have an opportunity now for a bipartisan solution to gun safety, and I am trying to convey to folks that it’s all hands on deck.”

With Democrats in control of the White House, the House and the Senate for the first time in a decade, the recent string of mass shootings has encouraged activists to make a concerted push for fresh legislation restricting access to guns. But with no clear consensus on how to achieve an elusive goal — and with the White House reluctant to spend limited political capital on a prospect with long odds — there’s a palpable fear among gun-control groups that their best chance in years to change the nation’s gun laws could once again end in failure.

“Personally, it was exceptionally hard to get out of bed today,” Max Markham, policy director of March for Our Lives, said Friday after news of the massacre at a FedEx facility in Indianapolis. “But at the end of the day, we’re doing our jobs as activists and as people who care about this issue, and it is up to the Senate, really, to do their job.”

March for Our Lives, a group that formed in 2018 after a shooting at a Parkland, Fla., high school killed 17 students and staff, is planning to bring several students to Washington this week to push lawmakers on background-check legislation, which most groups have rallied behind as their most likely chance at success.

“We can’t give up. One hundred Americans are shot and killed every day. Hundreds more are wounded,” Watts said. “This isn’t something where anyone can afford to sit on the sidelines and just say, ‘This is the way it is.’ ”

While legislation requiring background checks for all gun buyers has passed the House, the odds remain long in the Senate, where Democrats hold a razor-thin majority.

Congress has repeatedly declined to respond to mass shootings in recent years, even as they have become more frequent, with Democrats pushing for gun restrictions opposed by Republicans. Although gridlock has persisted for years, shootings over the past month have renewed a push by some lawmakers to try to strike a bipartisan compromise.

Weeks before the country saw back-to-back mass shootings in Atlanta and Boulder, Colo., the House passed two bills mostly along party lines that would lengthen the review period for background checks and make them mandatory for all gun sales and transfers.

Both bills are unlikely to be approved by the Senate, which would require 10 Republicans joining with all Democrats to pass them. Sen. Joe Manchin III (D-W.Va.) has expressed opposition to the House bills as well. President Biden has voiced support for the legislation but has said his priority is to get control of the pandemic and rebuild the economy.

Democrats, led by Sen. Chris Murphy (Conn.), are still working behind the scenes to see whether they can strike a deal with Republicans on background checks. While any bipartisan deal would probably fall short of what Democrats want, it would still mark a rare response from Congress to mass shootings. But skepticism remains that anything will get done.

In response to the shooting in Indianapolis, Senate Majority Leader Charles E. Schumer (D-N.Y.) once again committed himself to holding a vote on gun legislation “to address this epidemic in America.”

It’s unclear whether he will put the House-passed bills or other legislation on the floor.

Barden, whose 7-year-old son, Daniel, was among 20 children killed in the Sandy Hook Elementary School shooting in 2012, said the frequency of mass shootings in the United States has become “devastating and horrifying,” and Congress’s unwillingness to pass meaningful legislation is “frustrating.” Still, he said, the gun-control movement remains energized.

Some activists say they have no choice but to be optimistic after facing years of inertia in Washington.

Markham said the recent mass shootings have steeled the resolve of those pushing for gun control, as lawmakers on both sides of the aisle face growing pressure to act. Democrats who campaigned on combating gun violence are now in charge, and some moderate Republicans who have seen their districts ravaged by mass shootings have voiced an openness to some restrictions on firearms.

“Is this moment different? It has to be,” Markham said. “That is what is fueling so many of the victims and survivors and people who are impacted by gun violence. . . . It’s going to be different, because it just has to be. We just can’t keep doing the same thing over and over again.”

Gabrielle Giffords, who left Congress in 2012 with a brain injury from a mass shooting that killed six people in 2011, told The Washington Post’s Power Up newsletter earlier this week that she was optimistic that the long-standing Republican blockade against gun-control bills would soon fall.

“It’s clear that the tone of many Republicans has changed,” she said. “They realize that inaction is no longer tenable.”

Still, she acknowledged that the change in tone does not necessarily mean that a shift in voting patterns will follow suit, especially with groups such as the National Rifle Association urging Republicans to reject any restrictions on the Second Amendment.

But the NRA is in a weakened state as it deals with bankruptcy proceedings following internal disputes and tensions over the financial stewardship of the organization. Some proponents of stricter gun control argue that this should only further galvanize calls for action from Washington. The NRA did not respond to a request for comment.

There is not widespread agreement among gun-control activists about how much to accommodate Republican demands in the negotiating process over the background-check legislation. Getting 10 Republican votes may require Democrats to reduce the scope of their preferred legislation significantly.

But some have urged taking a harder line, pointing to Giffords’s husband, Sen. Mark Kelly (D-Ariz.), as evidence that the politics of the issue is on their side. Kelly was elected in 2020 to a Senate seat long held by Republicans after backing tougher gun laws.

Republicans in Congress have largely been reluctant to embrace any new restrictions on gun rights, and former president Donald Trump has often cited a strong defense of the Second Amendment as a litmus test for doling out endorsements.

Biden has not yet used his political capital in the same way, instead urging patience as he pursues pandemic- and economy-related legislation. He has described it as “a matter of timing,” saying last month that he would push Congress to focus on gun issues after focusing on other priorities.

But the string of mass shootings during his first months in office has already begun to force his hand.

Earlier this month, following shootings in that killed eight people in Georgia and 10 in Colorado, Biden took a series of executive actions to respond to what he has called the “international embarrassment” of gun violence. The moves, including new rules on so-called homemade “ghost guns” without serial numbers, were welcomed by gun-control groups.

But after a campaign in which he proposed some of the most ambitious gun-control measures of any presidential nominee, Biden now faces pressure from activists calling on him to follow through with more bold moves.

“After the shootings in Atlanta and Boulder, there was a real feeling in the movement that he, in some respect, was missing an opportunity to really lead, and lead in the way he promised he would,” said Igor Volsky, executive director of Guns Down America.

Volsky was among several movement leaders who have urged Biden to prioritize gun violence prevention during his joint address to Congress on April 28. Some of the various groups have formed a coalition, dubbed the Time is Now, to push for more urgency in Washington.

“The president has demonstrated to us what it looks like when he prioritizes an issue and wants to get it across the finish line,” Volsky said, pointing to Biden’s whole-of-government push on pandemic response efforts. “What we’re arguing is he needs to display that same kind of leadership on this issue. That’s what’s lacking.”

During a news conference Friday, Biden rejected the notion that he was not spending enough political capital on combating gun violence.

“I’ve never not prioritized this,” he said. “No one has worked harder to deal with the violence used by individuals using weapons than I have.”

He urged the Senate to bring up and vote on the House-passed background-check bills and said he continued to support a ban on assault weapons and guns that hold more than 10 bullets. 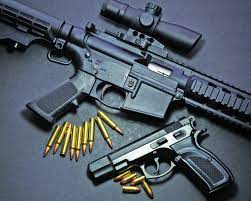 Watch Stephen’Wonderboy’ Thompson Punch a Bodybuilder Repeatedly in the Gut

Alex Rodriguez Had the Most Iconic Response When Asked About J.Lo and Ben Affleck

Alex Rodriguez Had the Most Iconic Response When Asked About…

This Year’s Monaco Grand Prix Trophy Comes With Its Own…