According to historian and biographer Robert Lacey, who has written a new book looking at Prince Harry and Prince William, Meghan Markle was a “massive problem for the royal family.

Robert, 76, appeared on Good Morning Britain to discuss the book, Battle of Brothers, and the “real reason” behind the apparent rift between the two brothers.

The author brought Meghan into the conversation and said Prince William was “quite right” to speak to his brother about the relationship. 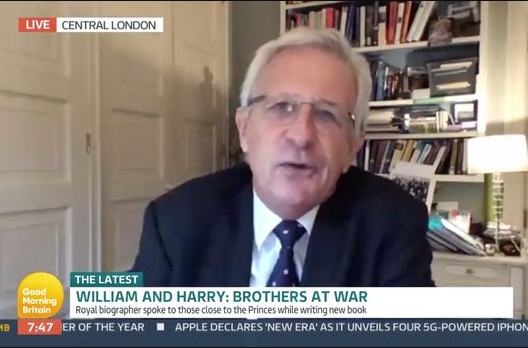 Robert said: “Meghan was a massive problem for the Royal Family. She’s a self-made millionairess, the only one in the Royal Family who created her own celebrity, not inherited it.”

He went on to say: “William was quite right to say to Harry, ‘Look, this is a challenge you’re bringing into the family, how’s it going to work?’ and with wisdom after the event, one has to say not enough preparations were made.”

Robert explained: “She wasn’t made to feel important enough and they are now where they want to be.”

Piers Morgan, 55, interjected: “The truth is, in the succession line, she’s not that important – and neither is Harry.”

Earlier in the chat, Robert said that Harry and William’s differences “went way back”.

He said: “It goes right back to the beginning, it’s chickens coming home to roost from all the troubles of the 80s and 90s, these young boys are the product of marital turmoil.”

The historian suggested: “William took the lesson of duty. As he went through this difficult time, the prospect he was going to be King was a strength for him, to the degree that when he fell in love, he politely asked his girlfriend to wait nine or 10 years to make sure she’d be good for the job. They have created a wonderful figurehead for the future.

“Harry took the opposite conclusion from the turmoil of his parents’ loveless marriage, that he was going to go for love.

“We’re looking at a clash of love and duty.”

But Piers said: “I don’t think there’s any doubt William loves his wife.

“It seems to me, the real friction with Harry and the rest of the Royal Family, it seems to have come down to this moment when William was concerned about the speed of his relationship with Meghan.”

Harry and Meghan started a relationship in June 2016 and announced their engagement in November 2017.