Variations for your delight!

In 2000, the MINI brand raised from its ashes, helped by its new partner, BMW, and introduced a new model range. In 2021, MINI already reached its fourth generation and came full-power in a few versions: three doors, five doors, and the convertible. That refresh was mandatory; hence there were new emission regulations in Europe, and the carmaker tried to stay on top of its game and offer the …

While a three-door S version was already natural for the MINI, the 5-door version meant that someone could take the same car for its personal pleasure and to use it as a family car as well. MINI introduced the fourth generation of the Cooper S in 2021. The carmaker didn’t offer a 5-door version for the sporty model since the brand’s revival in 2000, but soon the customers started to…

60 years after the debut of the classic Mini, Mini John Cooper Works GP unveiled a perfect combination of power and agility. With the most powerful engine fitted in a Mini under the hood, the JCW GP is the fastest model the Brits ever made for road use. With a 225 kW/306 hp 4-cylinder turbocharged engine, the new Mini John Cooper Works GP can accelerate from zero to 100 kph in just 5.2 second…

Nobody buys a MINI for its practicality. The MINI is a statement for fashion, for design, and, depending on the version, for a sporty character. Since it was acquired by BMW in 1994 along with the Rover Group, the Mini launched three generations of the MINI hatchback. And it kept growing ever since in size and engines. The third generation offered a wide variety of options and, somehow, it l…

MINI was the first small-class premium vehicle and it kept that advantage for many years until other car-manufacturers entered the competition. But the British brand succeeded to keep its sparkling image on the market. MINI grew up and so its customers. This is why it needed a bigger version. That being said, the company engineers stretched a 3-door MINI, shortened the front doors and install…

Despite having grown a bit in dimensions, the 2014 MINI Hatch carries forward its predecessor’s aspiration to remain the leading original of the premium small car segment, providing significant advancements in all areas regarding driving fun, quality and individual flair. The new MINI is now 98 mm longer, 44 mm wider and 7 mm higher than its predecessor, while the wheelbase has been extended by …

hen BMW took MINI and transformed it into a fashionable, premium little car, the world was excited. But when the owners needed those two seats in the back, it wasn’t so nice anymore. That’s why MINI came up with the solution of the 5-doors hatchback. Maybe it is not that appealing anymore, but for sure it is far more practical. The kids won’t have to squeeze between the front seat…

After BMW took-over the Mini brand, it relaunched the famous British name on the market in 2000 with a fresh vehicle, but with a styling that resembled the former Monte-Carlo Rally champion. The second generation of the Mini hatch was released in 2006 and it didn’t need too much introduction since it looked almost the same as its predecessor. Underneath the similar design, it was a compl…

When BMW sold the Rover brand, it kept the Mini to pursue its plans on expanding on the rising market of small-segment premium vehicles. The first model introduced by the British brand after the German involvement was the MINI hatchback in late 2000. Its retro-design styling left no confusion regarding its origins, and BMW sold over one million units of it in just six years of production time…

It was the last stint for the original Mini designed by Sir Alec Issigonis, and despite its age, it was still a fun car and loved by their owners, as long as they were not tall. When it designed the Mini back in the early ’60s, nobody could tell that the tiny car would have such a success. From time to time, the British carmaker, which traded hands several times, included few updates. 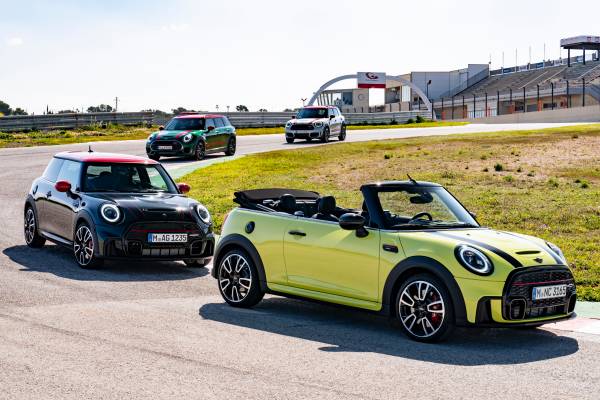 Policewoman allegedly stabbed to death by her boyfriend in Ghana

Greatest cars with supercharging or turbocharging