A man was left with a broken head after police officers reportedly broke into his home in Abraka, Delta, to arrest him.

The 27-year-old man named Kelvin Ilom, was arrested by a team allegedly led by Corporal Godspower, activist Harrison Gwamnishu reports. According to Gwamnishu, the man was beaten by the officers beause he asked to see a warrant for his arrest.

Sharing a video of the arrest and photos of the aftermath, Gwamnishu wrote: “A team of police officers led by Corporal Godspower broke into citizens’ homes with no search warrant.

“The rented apartment of a 27yr-old Kelvin Ilome was not spared as they forced their way into his house. He demanded for search warrant from these officers but was assaulted instead.

“These officers later took him to Divisional Police Headquarters Abraka where Corporal Godspower hit the victim on his head with a baton which in turn caused severe injuries on the head.

“The officer is currently detained as ordered by the DPO CSP Aliyu Shaba.  We at Behind Bars Human Rights Foundation are demanding for his prosecution ASAP.” 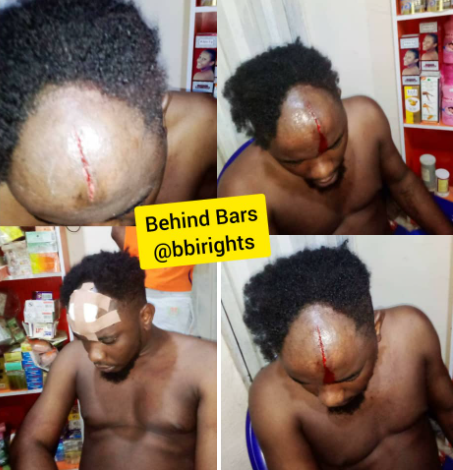