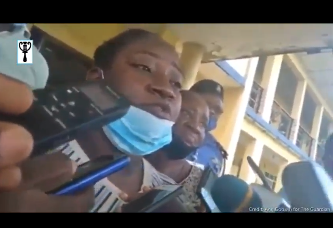 Speaking to newsmen at Rivers Police command headquarters in Port Harcourt, Bisola said her ransom went up to N200m after everyone reported that she was missing.

She further revealed that the kidnappers who shot at her, were surprised that she did not sustain any bullet wound. Bisola added that they attributed this to her having a charm.

The lawyer who stated that some of the kidnappers were violent, said they became frantic and were planning to kill her the night the police officers rescued her.

Graphic: Lady allegedly shot in the mouth by police officer in Lagos (video