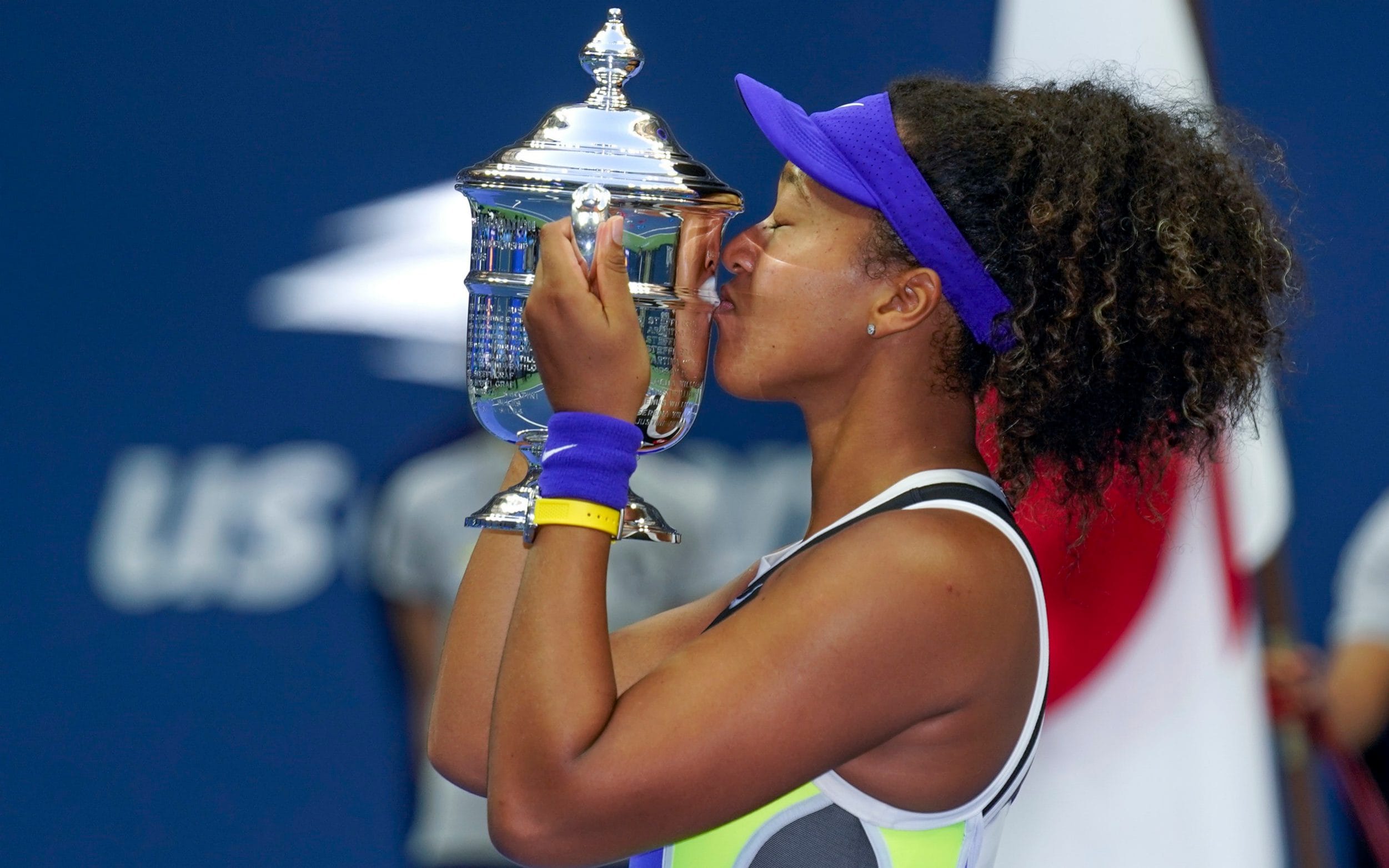 As Naomi Osaka lay on the Arthur Ashe Stadium court for 18 seconds after winning her second U.S. Open, staring into the sky, she recalled watching previous tennis greats do the same.
© Getty Images“I’ve always wanted to see what they saw,” she said after rallying past Belarus’ Victoria Azarenka 1-6, 6-3, 6-3.

So much else of what Osaka did on court the last two weeks was never before seen.

She walked into Ashe Stadium two Mondays ago for her first-round match wearing a black face mask. It bore the name Breonna Taylor, a Black woman who was fatally shot by police on March 13.

After Osaka’s three-set opener, she felt confident enough to declare this publicly: she brought seven different masks to the tournament, one for each round through the final, with a different name of a Black person killed in recent years.

“It’s quite sad that seven masks isn’t enough for the amount of names,” Osaka said on Sept. 1, two days after withdrawing before the Western & Southern Open final with a left hamstring injury. “So, hopefully, I’ll get to the finals, and you can see all of them.”

Osaka, the pre-tournament favorite for the first U.S. Open held without ticketed fans, had an awful start to her third Grand Slam final.

Azarenka, a 31-year-old mom aiming to go a record seven years between major titles, won eight of the first nine games and was a point from going up 3-0 in the second set.

Osaka, developing a knack for clutch play in these settings, found the will that brought her back-to-back Slams at the 2018 U.S. Open and 2019 Australian Open. She won six of the next seven games to take the second set. She then handled a back-and-forth decider, breaking Azarenka and serving it out in the last two games.

“Two years ago I maybe would have folded,” said Osaka, who was marvelous in a 2018 U.S. Open final otherwise defined by Serena Williams‘ arguments with chair umpire Carlos Ramos. “I’m more of a complete player now.”

The 22-year-old with a Japanese mother and Haitian father became the first woman to win a U.S. Open final after losing the first set since Spaniard Arantxa Sanchez Vicario in 1994. She became the sixth woman to win her first three major finals in the Open Era (since 1968).

“All the credit to Naomi,” said Azarenka, the 2012 and 2013 Australian Open winner who made it past the fourth round of a Slam for the first time since having son Leo in December 2016 and beat Williams in the semifinals. “She’s a champion.”

Osaka has matured through struggle in the public eye as tennis’ first new global star in many years. And the first on the women’s side since Maria Sharapova emerged 16 years ago at the dawn of the social-media age (the Williams sisters already established by then).

At last year’s U.S. Open, Kobe Bryant and Colin Kaepernick were in her player box. She then moved to California, reportedly after buying Nick Jonas‘ Beverly Hills mansion for $6.9 million.

“I sort of forced myself to grow up a little bit,” Osaka said on ESPN on Saturday, “like doing my own laundry.”

Then in May, Forbes reported that Osaka supplanted Williams as the world’s highest-paid female athlete, racking up $37.4 million in prize money and endorsements in the last year.

But it had not been a particularly strong stretch on court. After winning the 2019 Australian Open and becoming world No. 1, Osaka parted with coach Sascha Bajin, attributing the move to putting happiness before success.

She didn’t make it past the fourth round of her next four Slams and was open about nerves and the weight of the top ranking. After losing in the first round of 2019 Wimbledon, her press conference ended like this:

Q. Has it been difficult to get used to the new level of fame that you have? You’ve pretty much become a global superstar over the past few months.

Osaka: Can I leave? I feel like I’m about to cry.

In her last tournaments before the pandemic, Osaka said she had “quite a few mental breakdowns” in the tour’s January swing in Australia. She was swept by then-15-year-old Coco Gauff in the third round in her Australian Open title defense.

Then everything stopped. No tennis tournaments for five months.

“It’s been an important few months,” Osaka said. “My life was always go, go tennis-wise, especially after the previous U.S. Open that I won. It definitely accelerated things, and I’ve never had a chance to slow down. The quarantine definitely gave me a chance to think a lot about things, what I want to accomplish, what I want people to remember me by.”

In May, three weeks before Floyd’s death led to renewed calls for change and protests, Osaka tweeted that she “was done being shy.” That sentiment was sparked by an encounter with Jay-Z and Beyonce in the offseason when she was unable to put sentences together.

“I have a lot of regrets before I go to sleep, and most of the regrets is due to, like, I don’t speak out about what I’m thinking,” Osaka said in a CNN interview on May 5.

Weeks later, after Floyd’s death, Osaka came out of her shell in other ways. She flew to Minneapolis with her boyfriend, rapper Cordae, to have her voice heard on the streets in peaceful protest.

“We grieved,” Osaka wrote in Esquire. “When I came back to Los Angeles, I signed petitions, I protested, and I donated, like many of us. But I kept asking myself what can I do to make this world a better place for my children? I decided it was time to speak up about systemic racism and police brutality.”

That article was published July 1. On Aug. 26, Osaka made perhaps the biggest statement of her tennis career by choosing not to play.

“Before I am an athlete, I am a black woman,” was posted on her social media, announcing she would not play the following day’s scheduled Western & Southern Open semifinal. She called for racial justice, which led to support from other players and the event stopping altogether for a day.

“There are more important matters at hand that need immediate attention,” Osaka posted. “I don’t expect anything drastic to happen with me not playing, but if I can get a conversation started in a majority white sport I consider that a step in the right direction.”

At the U.S. Open, Osaka was a primary player at a major tournament without Roger Federer and Rafael Nadal, without Novak Djokovic for the second week and without Williams on the final weekend.

“I remember everything my mom sacrificed when I was younger, and she couldn’t even watch my matches,” she said. “I have so many memories of her waking up at 4 in the morning, catching the bus, catching the train. I know all the sacrifices she made. Hopefully I can repay her one day.”

On Saturday afternoon, Osaka walked into Ashe Stadium like she did two Mondays ago, wearing a mask to raise awareness. She delivered for a championship unlike any other, even if she thought of others while lying on the court.

“What was the message that you got?” Osaka answered on live TV to a global audience. “The point is to make people start talking.”

Tennessee lawyer accused of rape, kills himself when confronted by police in Alabama