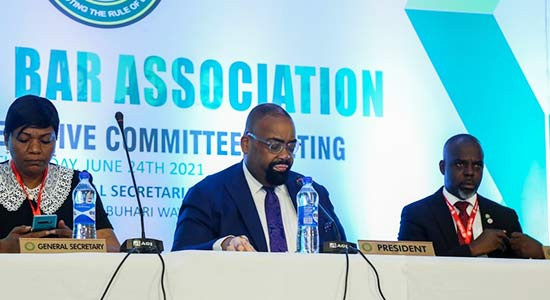 General Secretary of the Nigeria Bar Association,  Mrs Joyce Oduah has reacted to President of the association, Olumide Akpata issuing a disclaimer against her notice of withdrawal of Proposed Constitutional Amendments at the NBA’s 2022 annual general meeting.

In a statement titled “Setting the record straight”, Oduah accused President Olumide Akpata of demonstrating a “well-established unilateral control and command leadership style” as well as attempts to usurp the constitutional duties of her office.

Reiterating that her loyalty is to members of the NBA, she also accused the NBA President of canvassing for disregarding the NBA constitution’s provision relating to notice of constitutional amendment.

The leadership crisis in the NBA is coming ahead of the association’s annual general meeting scheduled to hold at the annual general conference later this month. The conference will be the last under the Olumide Akpata administration.