Rumi Carter, 3, Looks Exactly Like Big Sis Blue Ivy, 8, While Being Carried By Beyonce In The Hamptons

It was another fabulous outing for Beyonce and her brood as they were spotted having a fun time in The Hamptons! 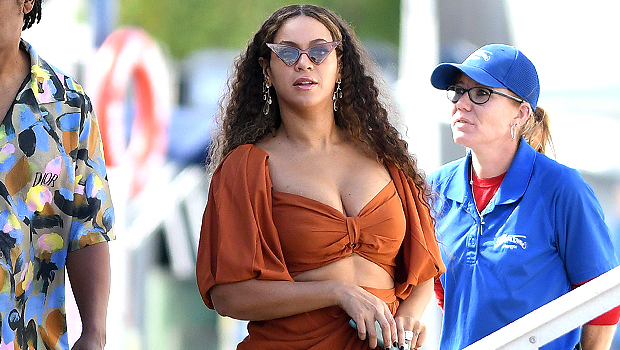 Beyonce, 38, her husband Jay-Z, 50, and their children (Blue Ivy Carter, 8, and twins Sir & Rumi, 3), have been living their best lives this summer even with the global Coronavirus pandemic still happening. The married couple were spotted out in two different locations on Eastern Long Island on Wednesday, August 26, with the “Single Ladies” star having a sweet moment with her daughter Rumi. It was here that she cradled her little one in her arm while heading to the docks where she stunned in a green cover up that effortlessly put her iconic legs on display.

Meanwhile little Rumi is looking more and more like her big sister Blue Ivy every single day! She dressed sweetly for their outdoor excursion in an all-white outfit where both mother and daughter rocked a very important accessory: a big floppy hat! There was one stark difference in their summery numbers as Rumi sported a pair of white flats while Beyonce decided to go barefoot.

Jay-Z was seen that same day with Twitter CEO Jack Dorsey and his Roc Nation co-founder Tyran “Ty Ty” Smith where all men involved looked to be getting a power walk in during a lively discussion. Jack, 43, was with Jay and his family two days before where they were all seen having a wonderful time with one another on a small boat in The Hamptons.

It was here that the multiple-Grammy winner wowed in a fashion trend that tons of other celebrities having been wearing this summer: Daisy Dukes! She paired those with a stunning while blouse while once again cradling little Rumi in her arms during their extravagant outing. What a life!

Both Blue Ivy & Rumi made cameo appearances in Beyonce’s breathtaking music video for “Brown Skin Girl” earlier this summer. Bey snuggled with Rumi during the powerful footage (which is part of her visual album Black is King) that also included appearances by Naomi Campbell, Lupita Nyong’o, Kelly Rowland.