OAP Tolu Oniru-Demuren aka Toolz, has said she is appalled at the question thrown at Pastor Ituah Ighodalo on remarrying months after the death of his wife, IbiIbidunni.

In an interview with Silverbird TV, one of the hosts had asked the Senior Pastor of Trinity House when he will be having another woman in his life.

He stated that he and his late wife had a phenomenal relationship, adding that he gave her everything and no longer has much to give to anybody. Read LIB

Toolz shared a screenshot of the interview on Instagram story saying that the question is insensitive given that it is not even a year since his wife died. 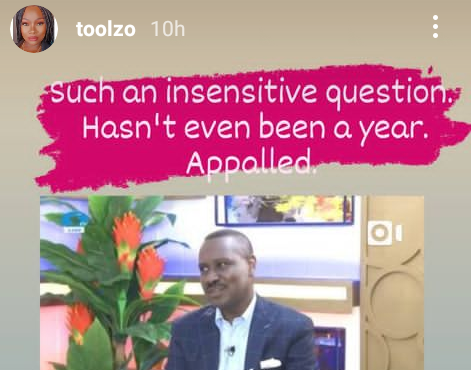 “Why do women like other women’s property?” Uriel Oputa asks as…