Roy George Tinashe Dikinyay pictured moments before falling off the cliff at Victoria Falls in Zimbabwe.

A tourist who was pictured near a cliff at one of the world’s most famous waterfalls slipped and fell over 350 feet to his death.

Witnesses told Zimbabwe’s Newsday that Roy George Tinashe Dikinya, 40, was standing by the edge of Zimbabwe’s Victoria Falls while taking turns with his family to take photos from the top of the huge waterfall when he tumbled over on New Year’s Day.

“We were alerted by the woman’s scream and she told us that he had slipped and fallen,” one told the paper of Dikinya, who was wearing sandals and was clutching several things in his left hand in the photo.

“Because of the showers and the mist, we could not trace him after that,” the witness said.

A photo taken seconds earlier shows him walking by the cliff’s edge while wearing sandals, and holding some items in his arm. 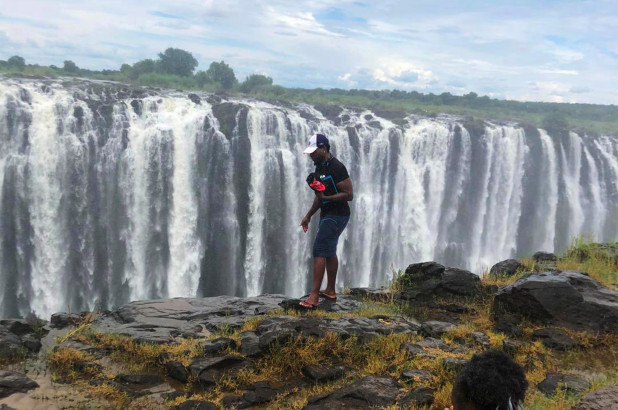 Rescuers with the Zimbabwe National Parks and Wildlife Authority found body parts trapped at the bottom of the gorge, which is at least 350-feet high, the Chronicle said.

The body parts “are trapped between rocks,” the authority’s spokesman, Tinashe Farawo, told the paper.

“We haven’t been able to positively identify him because of the location where the body is trapped, but we are certain that it his body,” he said.

“Right now we are in communication with other security experts including the army to try and find ways of retrieving the body,” he said, with one option trying to use a military helicopter.

Tourism and Environment minister Mangaliso Ndlovu in a statement sent his condolences to Mr. Dikinya’s family.