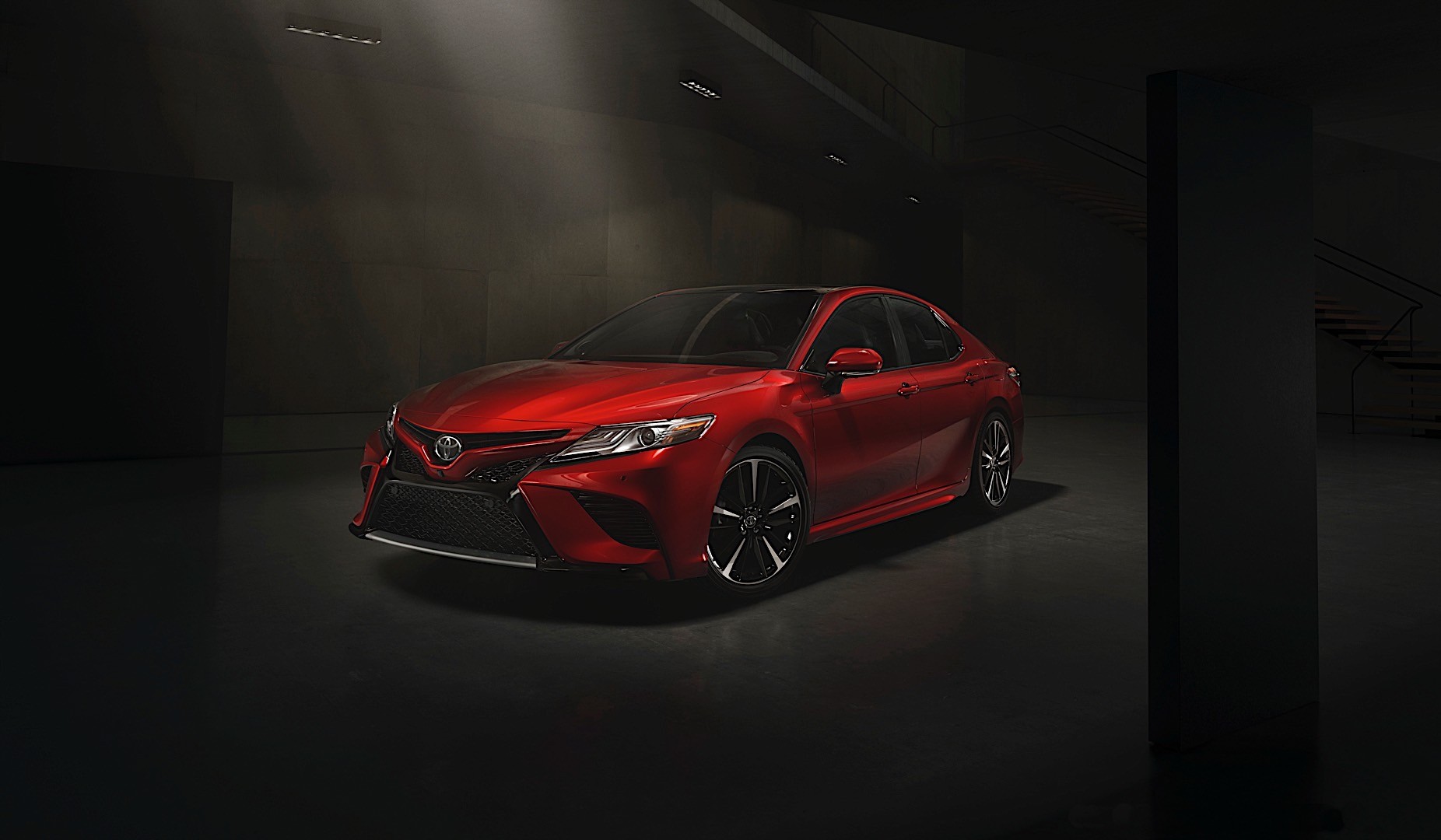 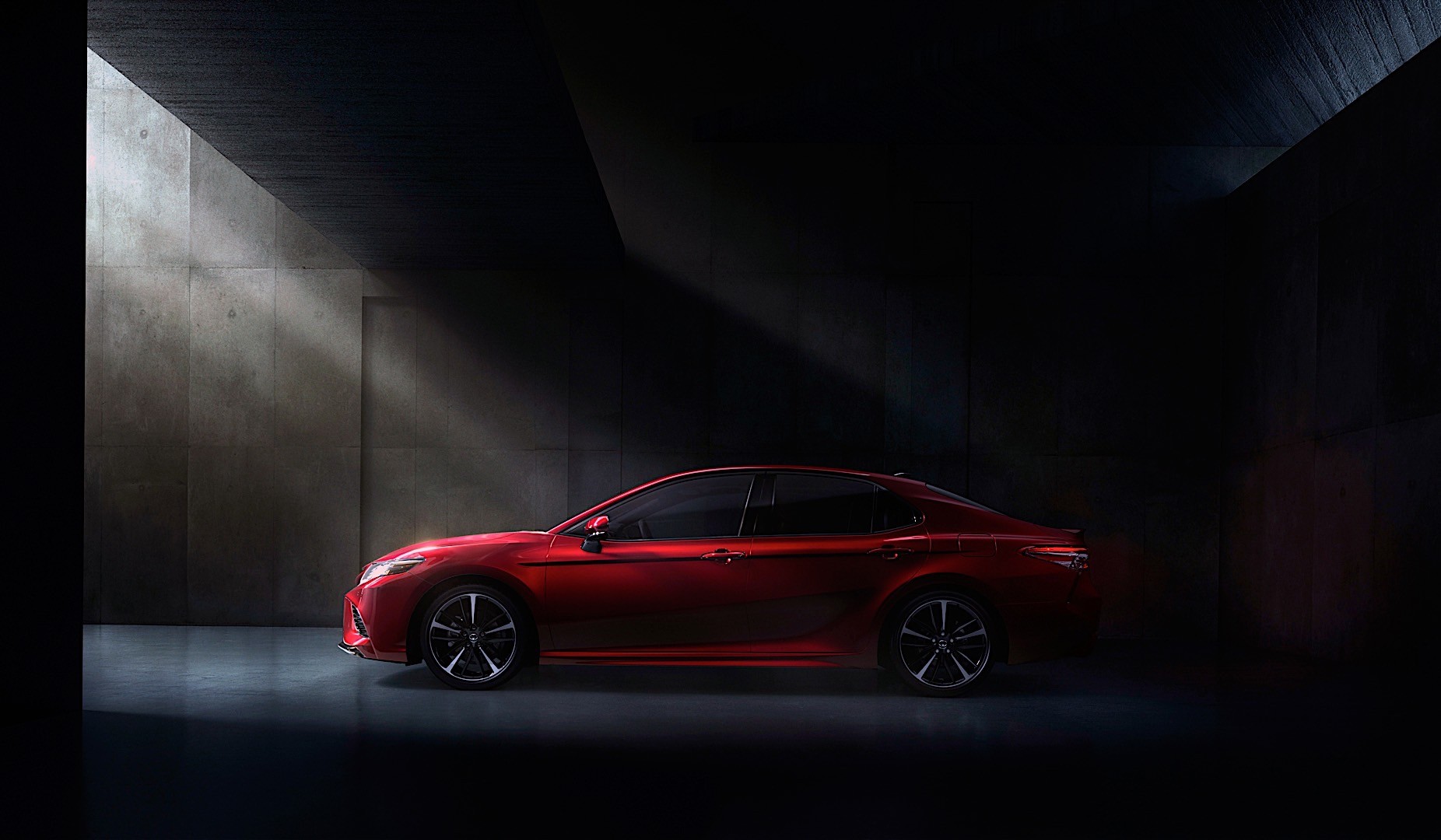 The eighth generation of Camry was shown in 2017 at the North American International Auto Show (NAIAS) in January.The most important evolution is the base platform, which is the TNGA (Toyota New Global Architecture). It grew in all sizes and, especially, in the wheelbase so the rear passengers had plenty of leg-room. And, very important, it may be equipped with an all-wheel-drive system.

The exterior design is bold and fresh. The Camry was, for years, one of the choices for retired customers who trusted its reliability and comfort. That is why it was sold in more than 15 million units. But the new design, especially on the top trim level, targets directly to the young customers. The car has a “Lexus” look with its sportier front bumper, where LED foglights are placed on vertical lines on the side. The vents openings in the bumper are large and aggressive.

Under the hood, Toyota installed various engines, from an inline-4 to a 2.5-liter V6 mated either with a 6-speed automatic or an 8-speed

When it comes to performance models, TRD is the brand Toyota enthusiasts are looking for. For 2020, the Camry TRD offers a completely different model then those for retired people. It is more like a ninja warrior under a poncho. The Camry TRD can hardly be distinguished from other Camry models, but there are some subtle visual details that will give you a hint about it. First, it has an aero …

The eighth generation of Camry was shown in 2017 at the North American International Auto Show (NAIAS) in January. The most important evolution is the base platform, which is the TNGA (Toyota New Global Architecture). It grew in all sizes and, especially, in the wheelbase so the rear passengers had plenty of leg-room. And, very important, it may be equipped with an all-wheel-drive system. Th…

In 2014 Toyota introduced a revamped Camry as a 2015 model. While it looks to be only a facelift, the automaker claims it’s wearing more than 2,000 new components. On the exterior, the model comes with a prominent character line, a muscular front end with a huge trapezoidal grille, new headlights, LED daytime running lights, slightly revised side lines and a rear end that looks almost like the L…

When it was launched in 2011, the Toyota Camry was the best selling car on the American market for nine years. Despite its not so much appealing look, it was chosen by customers for its reliability. It was the seventh generation of the Camry on the U.S. soil and to emphasize its sporty character, it debuted on August 27th at the NASCAR Sprint Cup series. It was a clear sign that the car-make…

The Japanese version of the Toyota Camry was manufactured in Aichi, Japan, and came with a couple of new elements in comparison with the models produced for the other markets. Moreover, Daihatsu had a similar model called Altis which was introduced in January 2006 and shared a lot of parts with Toyota’s Camry. The Altis was powered by a 2.4 liter 4 cylinder engine while the Toyota vehicle w…

Launched in 2003, the new model of Camry Solara marks the beginning of the second generation of the vehicle which came with a completely different design than the main model of the Camry. Using elements from Lexus, the new Camry had a 2.4-liter engine while another 3.3-liter V6 engine was available as an option. Moreover, it had a 5-speed automatic transmission similar to the one installed on th…

Launched in September 2001, the new Camry was larger than the previous versions and was only available as a sedan without a station wagon edition. However, the idea of a station wagon wasn’t entirely abandoned, the Japanese company introducing the Sienna minivan, a vehicle which was exclusively addressed to the North American market. Assembled in multiple factories around the world, includi…

In 1997, the Toyota Camry reached in 5th generation. The model was launched at different dates all around the world, the first being shown in Japan. The Camry was already known for its reliability and offered a comfortable and quiet interior. The car did not offer an exciting ride and it was not its purpose to, however, it was precise and predictable. The refreshed Camry came with an all-new…

Member of the third generation of the vehicle, the 1991 Camry was initially available only on the Japanese market. The US edition of the car was officially rolled out in 1992, the same year when the Japanese company unveiled an upgraded model of Camry. The 1991 version of the car had a four wheel steering system as well as a 2.0 liter V6 engine which was formerly known as Toyota Camry V6 Promine…

The 1987 version of the Camry is actually the second generation of the vehicle. The new model came with an all-wheel drive system while new engines were only available as options. The 2.5 liter V6 engine that can produce no less than 160 horsepower is a first for this model, the previous versions being equipped with 130 horsepower four-cylinder engines. Initially manufactured in Japan, the secon…

The Toyota Camry was first unveiled by the Japanese company Toyota in 1980, being still in production nowadays, obviously with a large number of improvements. Camry was one of the most popular ever produced by Toyota as it was named the best selling car in the United States for no less than ten years. Moreover, it was a best seller in Australia, Canada and in Asia but it also failed to impress i…

Flour Mills appoints Juliet Anammah to the Board of Directors