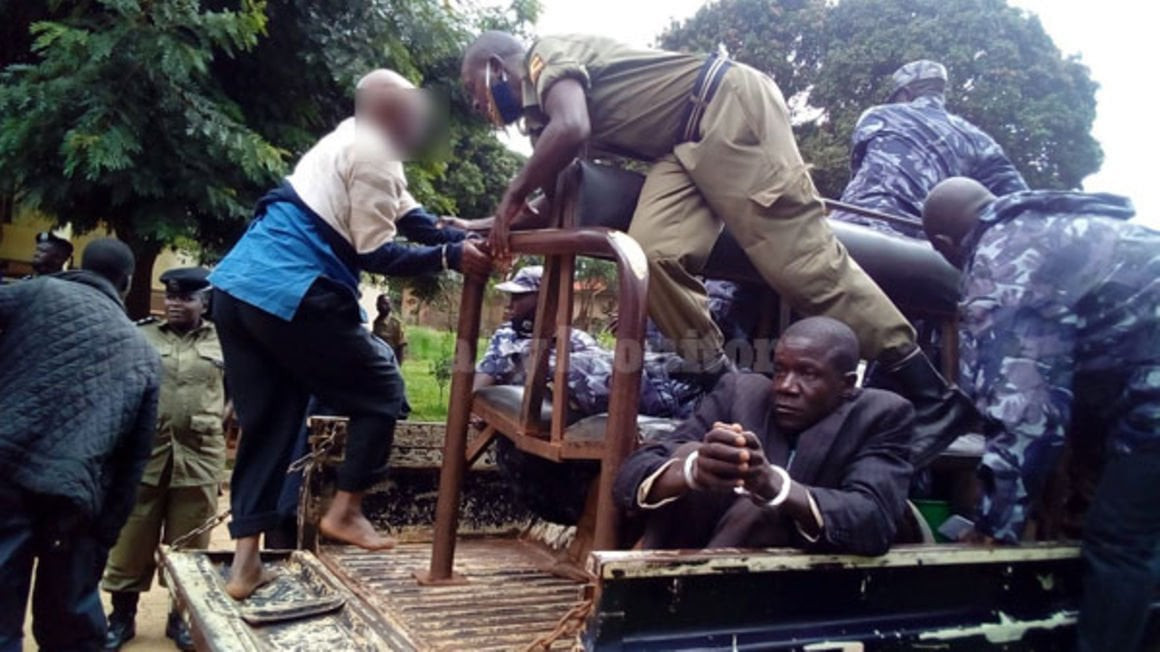 The suspects bundled onto a police pick-up truck after arrest

A 46-year-old man, Musilumu Mbwire, has been arrested for allegedly killing his two children for money ritual at Jiira Village in Bbaale Sub-county, Kayunga District, Uganda.

The body of one of the two children, Latif Kamulasi, 7, was exhumed by police pathologists on Tuesday, May 13, but that of his sibling, 3-year-old Sahum Baizambona, could not be located after a long search.

The police say the father confessed to have slit his children’s throats after his employer asked for their blood promising to pay him Shs4 million and a commercial building at Bbaale Trading Centre.

“My boss promised me Shs4m and a house if I sacrificed my children and gave him the blood, but he has so far paid me Shs100,000,” the police quoted Mr Mbwire to have said.

His employer, however, has denied any involvement in the shocking killing. Both men are in custody at Kayunga Central Police Station to assist police with investigations into the outrageous deed.

The police say producing the suspects in court to be charged, has been delayed by public holidays for President Museveni’s swearing-in on Wednesday and Idd-ul-Fitr on Thursday.

Spokesperson of the the Criminal Investigations Directorate spokesperson, Mr Charles Twine, said during a media briefing two weeks ago, the suspect’s brother, Mr Simon Kibubu, who lives in the same area, said he got concerned when he discovered that two of Mbwire’s children were missing.

“When Mr Kibubu asked his brother where the children were, he claimed he had taken them to their sister, Mary Kantono, who lives in the same parish,” Mr Twine said.

But when Mr Kabubu asked Ms Kantono about the children’s whereabouts, she said she was unaware. This prompted Mr Kibubu to notify the area defence secretary, Mr Asuman Bagala, and lodge a complaint with the police at Bbaale. The police then promptly arrested Mbwire.

Mr Twine and his team combed the bushes in Jjiira Village as the children’s father walked them from one spot to another to locate his children’s remains.

Three locations that Mr Mbwire had pointed out as burial spots turned out false, enraging more the charged crowd and police investigators. The crowd, among whom were relatives and residents, hurled insults and curses at the father.

Mr Mbwire then led the group to a site where they had burnt charcoal several months ago. There he was given a hoe and dug out lumps of damp and loosened soil with the help of some area residents.

More scoops yielded the decomposed body as tears rolled down the cheeks of some of the bystanders, who demanded the police surrender the suspect to them.

But the police quickly stepped in to shield Mr Mbwire from attack, but handed him gloves which he wore to scoop out the body of his son. Mr Twine said the suspect told them he buried Kamulasi in late March.

After exhuming the first body, the suspect led them to a forest where he said he had buried the second child, Baizambona. But the police failed to locate the body after digging up at several sites he had led them to. At 7pm, the police called off the search and promised to return later.

Mr Twine said they would resume the search this week and castigated people who look for wealth through human sacrifice.

“Wealth is gotten through hard work, not human sacrifice,” he warned.

The body of Kamulasi was taken to Mulago National Referral Hospital for a post-mortem as scene-of-crime officers and other detectives continue to gather more evidence.

Others were accepted but I was rejected thrice at ritualists’ den – Nurse,18, abducted in Rivers state shares her story