News of the rapper’s death was confirmed by his representatives through Pitchfork on Tuesday February 16.

Ketchy, born Jameon Davis, was known for being in the underground rap group Stinc Team, fronted by Drakeo The Ruler.

Drakeo paid tribute on Twitter, writing: “Long live Ketchy The Great,” before revealing his friend was hit by a car. 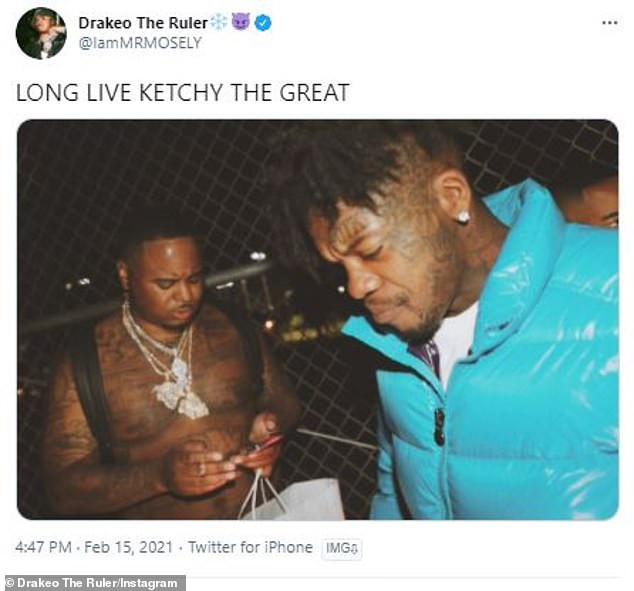 Speaking briefly on Instagram Live, Ketchy’s pal addressed the rumours around his death, saying: “Don’t make it seem like…c’mon, bro. You know how these n***** gon’ get.

“A ball of 1000 watt voltage with a razor blade growl, who never failed to steal a track… whose promise was first undercut by the DA plot to persecute the Stinc Team, & now this. An unspeakable loss.”

Music writer Jeff Weiss shared: “RIP Ketchy the Great, one of the brightest LA talents of the last five years: a livewire possessed with million watt voltage and a razor blade growl, who never failed to steal a track, and whose promise was first undercut by the DA plot to persecute the Stinc Team. Now, he’s tragically gone. Ketchup was a kind and loyal human being, a soldier and a legitimate original. Hilarious and vibrant and raw.”

“An LA legend from the jerkin’ days to killing it on the original version of “Mr. Get Dough,” the song that first made the Stinc Team all-city.”

“Beyond the sheer madness of his death, it’s infuriating that he had to spend most of the last three years in a cage — because the crooked Sheriff’s and DA used gang enhancements and racist manipulation of the legal code to lock him up for spraypainting in a music video. He never complained, held it down for his friends and family, and was about to sign a deal, get paid, and really make the waves that he long deserved. His loss is unspeakable and cruel, but his memory will indelibly live on.” 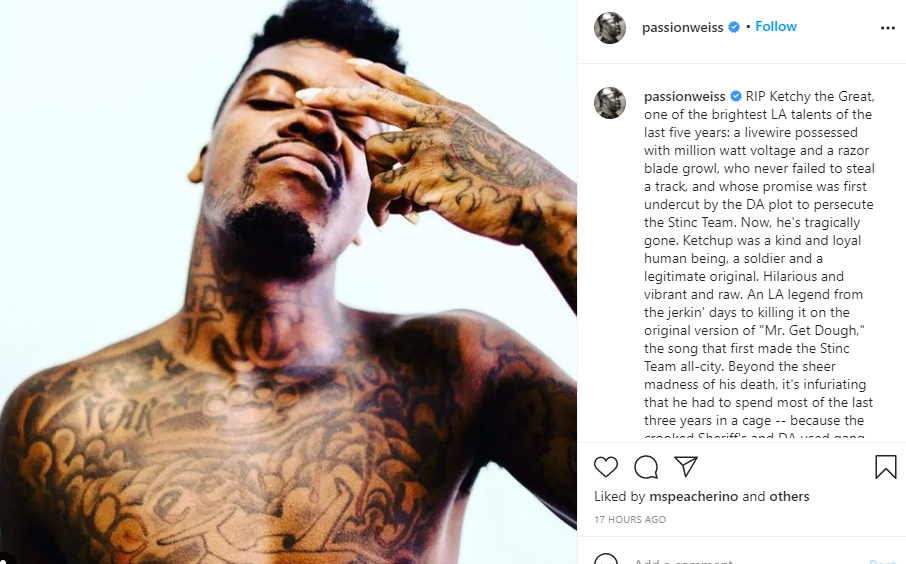 Ketchy found fame with Stinc Team while also working on his own music, releasing the 2017 song If I Go Broke and a mixtape titled Free Sauce in 2019.

His music career was put on hold in 2017 when he was arrested for graffiti while shooting the music video for his single The Right Decision featuring Ralphy The Plug.

For his crimes, Ketchy served two years and 10 months in prison.

After his release, Ketchy quickly returned to music, debuting the songs Another One and Gang Enhancement while also appearing on Drakeo’s new mixtape We Know The Truth.