Vatican rebukes priests over ‘tariffs’ for weddings and funerals. 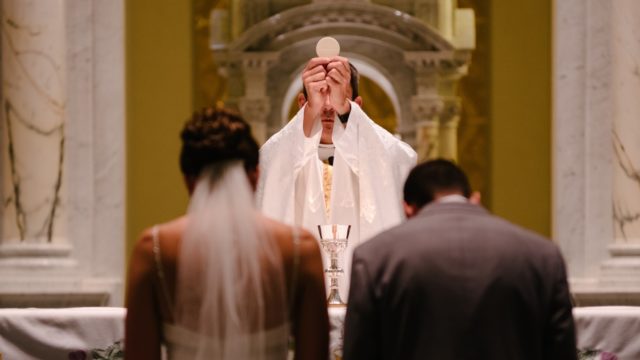 The Vatican on Monday reminded its priests they should not be charging fixed prices for celebrating weddings and funerals, and that such ceremonies could be performed by lay people where necessary.

While many Roman Catholic churches ask for donations for masses, others have specific price lists for different services, from baptisms to masses in memory of the dead — a practice the Holy See severely frowns upon.

In new guidelines for parishes which remind priests of existing laws, it stressed “the need not to ‘commercialise’” masses or “give the impression that the celebration of the Sacraments… are subject to tariffs”.

“An offering, by its very nature, must be a free act on the part of the one offering… not a ‘price to pay’ or a ‘fee to exact’, as if dealing with a sort of ‘tax’,” it said.

And though in some countries offerings during mass are the only source of income for priests, it “earnestly recommends” they celebrate mass “even if they have not received an offering”.

The reminder comes despite the church suffering a financial fallout from the coronavirus. The Vatican’s finance minister warned in May that the closure of museums and axing of fundraising events would see takings drop up to 45 percent.

The church is also grappling with fewer priests and an outdated parish model which it said needed urgent reform.

‘Vibrant collaboration’
While the number of Catholics went up globally by almost six percent between 2013 and 2018, the number of priests dropped 0.3 percent — with an over seven percent drop in Europe, the church’s 2020 annual statistical report said.

Remedies include allowing “lay persons to assist at marriages… where there is a lack of priests and deacons”, and if the Holy See gives permission. They can also celebrate Sunday mass and funerals.

That option is available “only in circumstances of true impossibility” in getting a priest in.

Local churches have to “explore creatively” ways to reach out to people and combat a lack of congregants in Europe in particular — while priests at the same time will have to take care of more than one parish, it said.

The guidelines follow Pope Francis’s admission in 2013 that “the call to review and renew our parishes has not yet sufficed to bring them nearer to people”.

The Vatican said best practice would have one priest care for one parish, but “because a shortage of priests or other circumstances, the care of a number of neighbouring parishes can be entrusted to a single parish priest”.

Priests should not feel they are going it alone, however, but form a “vibrant collaboration” with deacons and lay people.

In some situations, where a parish cannot offer a presbytery, a priest can move back in with his parents — though the Vatican warns he “must not become dependent” on them to the point that it affects his relationship with the faithful.

And in rare cases, run-down churches may have to be given up — primarily if they are “in such a state as to be unable to be used for divine worship in any way” — but under no circumstances are they to be reduced to “sordid use”.

The History and Evolution of the Bugatti Chiron— A definition of Class.