A middle-aged  homeless man along Lagos-Badagry Expressway, Lagos, has been crushed to death by a vehicle (shuttle bus) that ran over him.

The man, whose name and address had yet to be identified, was reportedly crushed when the driver, one Rahmon, put the bus in reverse. 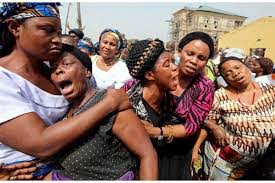 City Round gathered that the vehicle climbed on the man who lay by the roadside and killed him on the spot.

Passersby were said to have held the driver and alerted the police to the incident which occurred penultimate Tuesday.

A commuter, Babatunde Philips, who witnessed the incident, told our correspondent that the victim’s body was evacuated to a mortuary.

He said, “I was returning home from work around 6pm that day when I met the accident on the road. I learnt the man was sleeping beside a LAWMA container.  The bus driver put the vehicle in reverse and unknowingly crushed him.

“The man had been around that spot for months. He looked ill and was probably resting when the incident happened. Some policemen came to the scene and arrested the driver.”

In a related development, a passerby, Saheed Nurudeen, has been killed by a truck along Baiyeku Road, Igbogbo, Ikorodu.

Nurudeen was walking by the roadside when the truck driver, one Nurudeen Lamidi, reportedly veered off the road and knocked him down.

The victim was said to have been rushed to the Ikorodu General General Hospital where he was confirmed dead on arrival.

“The accident happened last Friday. The suspect was arrested and his vehicle was impounded. It appeared the vehicle had a brake failure and it lost control. The victim died at the hospital,” a commercial driver in the area, Oladele Akeem, explained.

The Police Public Relations Officer in the state, DSP Bala Elkana, who confirmed the two accidents, said policemen from Motor Traffic Department responded to distress calls from the areas.

He said, “The first accident involved a bus driver who climbed on a destitute man along Lagos-Badagry Expressway while the vehicle was in reverse. The man died on the spot and his corpse was evacuated to the Mainland Hospital Mortuary, Yaba for preservation and autopsy.

“In the second incident, the driver of a tipper knocked down a passerby who sustained serious injuries and later died at the hospital. His corpse was deposited at the hospital morgue. The suspects have been arrested and investigations are ongoing.”

It was earlier reported that a New York man died after being crushed by an empty car accidentally started by remote control.

Michael Kosanovich, 21, had been standing between two parked 2002 Lexus IS300s, on 6 December, when one of them had been started remotely by its owner, police said.

The car rolled forward and he was pinned between the two vehicles.

Bystanders tried to push them apart but as they did so, the car rolled forward and crushed him again.

Mr Kosanovich was taken to hospital with severe trauma to his torso and legs, according to the New York Police Department (NYPD). He died of his injuries on 7 December.

The NYPD said Mr Kosanovich had been inspecting one of the vehicles at the time of the accident, intending to buy it.

A spokeswoman for Toyota Motor North America told BBC News: “Our deepest sympathy goes out to the family and friends of Michael Kosanovich.

“Although many details are unknown at this time, we have reached out to local law enforcement to offer support in the investigation.”

Toyota added that Lexus “did not offer a factory-installed remote start in the 2002 IS” car model.

This would suggest such a remote ignition system would have needed to be retrofitted to work with the 2002 Lexus IS300.

The system’s instruction manual warns users they should never remotely start the engine if they are “unaware of the circumstances surrounding the vehicle” as it could pose a threat to the lives of anyone in the car’s vicinity.