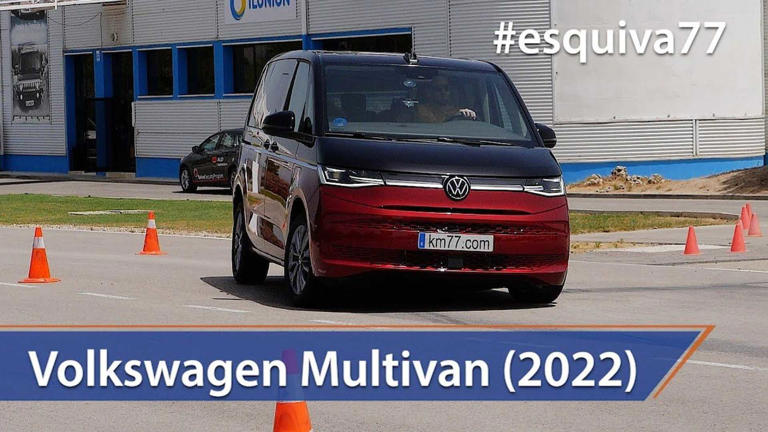 With a high center of gravity and a lot of weight, the odds are against it.

Sports cars typically excel in a moose test because of their inherent nimbleness, but the Volkswagen Multivan (T7) is not exactly the most agile vehicle on sale today. Large and heavy, the bulky family hauler has a tall roof and consequently a high center of gravity. It’s also quite the porker if we’re talking about the plug-in hybrid version since the extra electric bits push the curb weight to over 2,100 kilograms (nearly 4,700 pounds).

It’s safe to say the odds were against it right from the beginning in this moose test organized by the Spanish folks at km77. Measuring 235/50 R18, the Bridgestone Turanza T005 tires didn’t help its cause either as the journalists have had disappointing experiences with that type of rubber in previous evasive maneuver tests conducted with other vehicles.

After several failed attempts to undergo the moose test without taking down any cones in the process, the VW T7 Multivan completed the course at a relatively low entry speed of 69 km/h (43 mph). That said, it was still marginally better than the Ford Tourneo Custom by having a 1 km/h higher entrance speed. The journos do point out that the Blue Oval’s van reactions to the driver’s input were better.

The T7’s electronic stability control kicked in and reduced the speed to 64 km/h (40 mph) at the halfway point before the boxy PHEV existed the course while doing 42 km/h (26 mph). Attempting to have a higher entrance speed was to no avail since it didn’t take long until the Multivan smashed into at least one of the cones.

Watch Out For The Moose!

In the subsequent slalom test, the electrified Multivan performed better by providing a better sense of control for the driver to perform smoother direction changes. As in the moose test, the ESC played its part to slow down the vehicle. The vehicle needed 26.5 seconds to complete the slalom, thus perfectly matching a much smaller and lighter car from the same Volkswagen Group, the new Skoda Fabia. For reference, the Polestar 2 has achieved the quickest time so far, at only 22.8 seconds.

2022 BMW M4 Competition Convertible Pros And Cons: Class Of One