What is the Difference between Seed, Tithe and Offerings— An Expose

I am going to suggest an ancient idea to you that is for personal abundance. We could call it casting, “faith-ing,” or seeding. Let me tell you how it works, especially in contrast to tithing. In a way, tithing is asking, “What is the appropriate behavior in the eyes of the Lord?” It is saying, in essence, “God, thank you for what I have received. And from what I’ve received, I want to give 10 percent back to you.” That’s like an aftereffect: After I get it, I tithe. So, a very simple way of defining tithing, without going into the financial aspects of it, is that you’re saying, “I am thankful for what I have already received.”

Seeding is for a future effect and is done beforehand. It works in the same sense as when you pray over your food and say, “Thank you, God, for what I am about to receive.” With seeding, you are saying, “Before I receive this, I am acknowledging the presence of it.”

When we seed and tithe, it’s important that we pay attention to the attitude we’re holding. We have to watch the thinking and the feelings and the body, because on this planet, we know that, in terms of the polarity, there’s more negativity than there is the positive. That’s because the Soul is so positive that it has to have a tremendous balance of the negative polarity in order for it to stay here.

The tithing process is a statement that none of these “things” on the physical level belong to any of us. If your attitude is, “I don’t have money to tithe to the church,” you’d probably better, because you may lose even what you have. Or, as it’s stated in the Bible, “For everyone who has will be given more, and he will have an abundance. Whoever does not have, even what he has will be taken from him” (Matthew 25:29 NIV).

Now, we’ve seen people experience poverty in the midst of plenty, and their attitude is sometimes called “poverty consciousness.” It’s an attitude of, “I don’t have enough, and there never will be enough.” But listen, there is endless supply. Once you understand that, you are on your way to a much higher level of freedom.

One of the things that goes against seeding and tithing is hoarding. We’re vital, alive human beings, and part of our existence here is loving, caring, and sharing. Hoarding goes against that. Emotionally, it is a feeling of lack; financially, it’s being miserly; physically, it manifests itself as disease.

When we start to place these blocks to abundance, we are out of line with our own spiritual directive — not the church’s, not the Traveler’s — our own. And when we’re out of that, we can tithe and seed to bring ourselves back into alignment. We can come from all sorts of different levels and still be aligned toward God. But if we say we’re aligned and we’re not, we can have lack taking place inside of us. This lack could be feelings of unworthiness, or it could be where we don’t have something and we say, “I don’t have enough money. I don’t have enough education. I don’t have enough love. I don’t have enough relationships.” There it is — mental, emotional, physical lack.

So technically, tithing comes under the law; it comes under the Old Testament. Seeding comes under grace as a future existence, and it’s one of the most profound, best kept secrets in the Bible. It has been called faith tithing, and we could also call it pretithing, except it’s not based upon 10 percent of what you’ve received; it’s based upon the amount you want to receive, and there’s no limit to how it can come in. Still another name for it is the tenfold increase. For the bigger thinkers, it’s called the hundredfold increase, and for the gigantic thinkers, it’s called a million fold increase.

Seeding is the idea of going to a field with wheat in your hand and casting it on the land as they did in biblical times. The implication is that there’s an attitude of gratitude for having the opportunity of owning the land, seeding, and reaping. In modern times, when you’re seeding for some thing in the future, it is not as clearly defined how that future event will be returned to you. This is in contrast to tithing, where you know exactly how it is returned because you have already received it.

Seeding says, “I know this future event will come through God’s bounty.” That could be money, better health, a change in job, and so on. How does God bring that to you? However God does it. And rarely does it come just exactly the way you expect it.

This idea of casting forward through seeding must include an act that commits you to it as a mental focus. You need a clear vision, a clear idea of how you want it to be, and you seed for that. Then you wait for the harvest — not in terms of sitting down but in terms of watering and fertilizing the ground so that there’s something for it to grow out of. You make sure it’s watered and fertilized by keeping your mind on what you want; you water and fertilize it out of your mental desires. It’s an attitude or vision.

More simply said, seeding is the planting of what you want to receive, and tithing is the harvest. It’s very hard for people to shake you loose from your Spirit if you’ve done both tithing and seeding because, in this process, God is giving to you and you’re just giving back and saying, “Here, God. Here’s some more.” It’s a phenomenal experience, but you may not know it until you try it. If you just take my word for it, you may never know. You have to do it for yourself.

Just do it if you’re after the abundance and the prosperity and the harvest. When you get the harvest, you then share it through tithing, which is grace. And then you seed again with God as your partner, which is Divinity. You’re recognizing the divinity of it all, the oneness of the whole thing.

Tithing educates the lower consciousness, and seeding is cooperation with the higher consciousness. Tithe for the lower self, seed for the high self, and share it out through the conscious self. Be the source of extreme abundance and overflow for everybody around you. 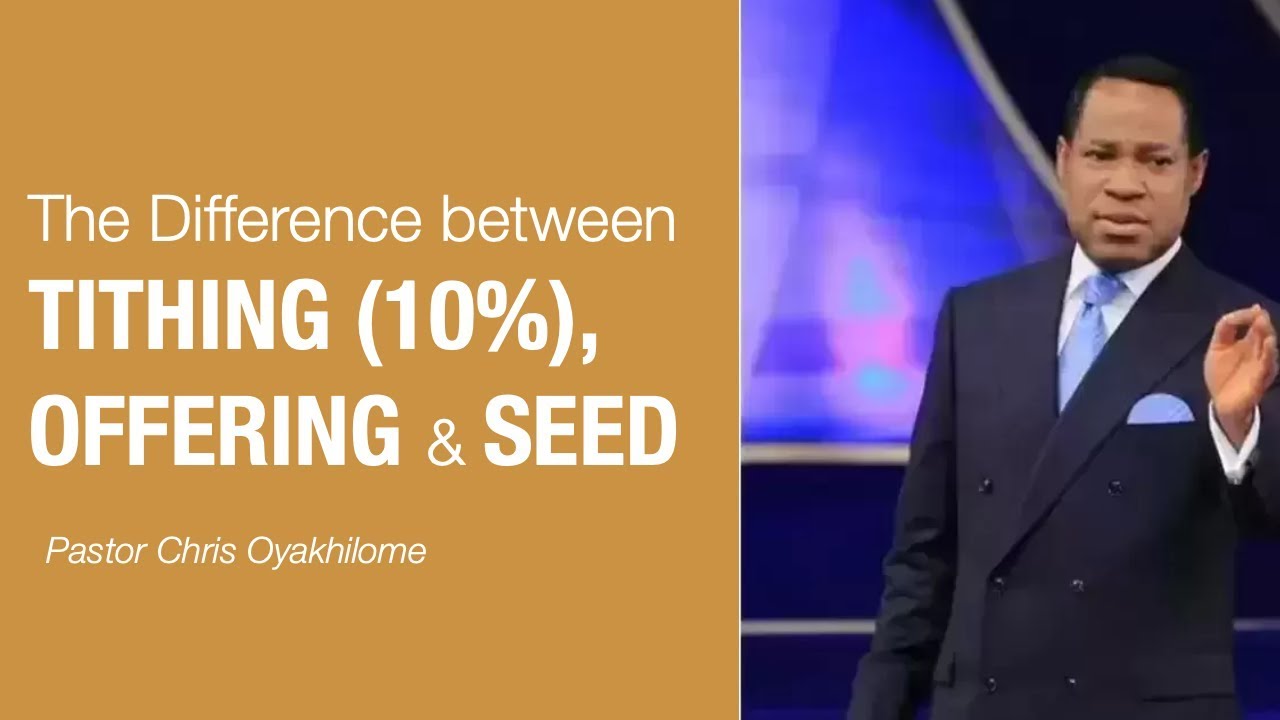 How to Get Rid of Acne (Pimples) and have a well rendered face.

Pope Francis declares ‘homosexuality is a sin but not a crime’

BBNaija’s Maria apologizes after mistaking Apostle Selman for the…

Pope Benedict XVI: the body exhibited in the Vatican with a special technique of…