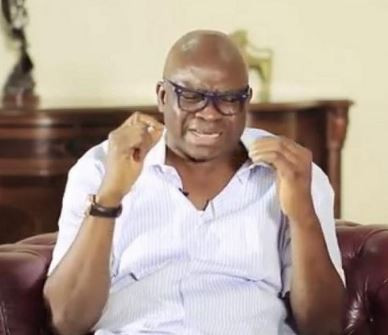 The trial of Abiodun Agbele, an aide to a former governor of Ekiti State, Ayodele Fayose, continued on March 28, 2019, with a prosecution witness narrating how he coordinated the movement of the N1.2bn slush fund, in the build-up to the Ekiti governorship election in 2014.

Testifying as the third prosecution witness, Biodun Oshode, Zonal Head of Zenith Bank Plc, South-West, while being led in evidence by counsel for the EFCC, Wahab Shittu, further narrated the role he played towards the movement of the cash on May 17, 2014.
He said: “It was Biodun Agbele that coordinated the movement, he came with security and we went to the airport.

“On the 17th of June 2014, I got a call from my colleague who is the Zonal Head of South-West 1, Ibadan branch that the customer has some lodgement with the Bank, that the cash will be coming through the Akure Airport, and Biodun Agbele came to the branch with security to go and evacuate the cash to the Ibadan branch with our bullion van.”

He further told the court that the slush fund was handed over to Agbele, adding that he also “supplied the accounts in which the money was disbursed into”.
He gave the accounts to include, De Privateer Ltd, Spotless Ltd and Ayo Fayose’s account.

No objection was raised by the defence team. Under cross-examination by counsel for the first defendant, Mike Ozekhome, SAN, the witness however, denied receiving any instruction from Agbele concerning evacuation of the cash.

“The instruction was from his colleague, Lawrence Akande,” he said. Ozekhome, further asked him if the procedure for the transaction was legal, and he said, “Yes”. He further stated that the slush fund was flown-in, in a single plane, and no action was taken against him concerning the transaction.

During his cross-examination by the counsel for the second defendant, Olalekan Ojo, SAN, he noted that someone who is not a signatory to an account cannot withdraw money from it, adding that he did not know the office where the lodgement took place. The fourth prosecution witness, Fajuyitan Olaitan, who was Head Treasury at the Head Office of Diamond Bank, Lagos, while being led in evidence by Shittu, told the court that he received an instruction to process “a high valued transaction”, which could only be made at the Head Office of the bank through the department he was heading.

He was thereafter confronted with the statement he volunteered to the EFCC during investigation, which he confirmed to be his. The statement was tendered by the prosecution as evidence, and it was admitted as exhibit. He said: “On June 16, a debit transaction was carried out on an account (Sylver McNamara) and a sum of N1.2bn was debited from the account and another debit of N0.2m was debited on the Sylver McNamara account.”

Under cross-examination by Ojo, the witness claimed that he did not know the person that issued a payment instruction regarding the debit transaction as his duty only bordered around processing of the debit. The matter has been adjourned to May 24 and 27, 2019 for “continuation of cross-examination