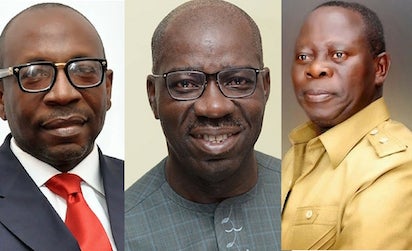 The Edo State Governor, Mr. Godwin Obaseki, has expressed his appreciation to the people of the state as well as leaders and members of his party, the Peoples Democratic Party (PDP) for their relentless support in his emergence as the flagbearer of the party in the forthcoming gubernatorial election.

In a statement, the governor reassured that his administration will continue to pursue programmes and policies aimed at improving the lives of the majority of Edo people.

According to Obaseki, “This victory is our collective victory and I urge our people to remain vigilant as we kick-start our campaigns for the main election. I appeal to you to remain steadfast in your convictions to enable us to win the war ahead just as we have won several battles together.”

The statement further reads, “My dear people of Edo State, leaders and members of our great party, the Peoples Democratic Party (PDP), I thank you all for your support and for electing me as the flagbearer of our party in the September governorship election.

“How could I have survived the epic political battles that I was dragged and forced into, in the last one year, without you, my people, solidly behind me? I thank my party delegates, who stood all through the day and night, to vote me as the party’s candidate.

“I salute leaders of the party who set aside their ambitions in the interest of party unity and the progress of our state.

“I thank every Edo man, woman, our resilient youth, home and abroad for making the fight for my emergence, their own. You invested your resources and raised your voices to support my aspiration even in the face of threats and intimidation”, he added.

Obaseki had on Thursday emerged the flagbearer of the PDP in the 2020 governorship election, polling 1,952 votes to win the party’s primary election. A total of 2,234 delegates from the 192 wards and 18 Local Government Areas of Edo State participated in the election, with the governor as the only candidate on the ballot, after three other candidates stepped down for him.

Announcing the result of the shadow election, the PDP Edo Primary Election Committee chairman and Bauchi State Governor, Bala Mohammed, declared the governor as the winner of the contest after securing over 90 percent of the available votes.

Over $30bn Needed To Develop COVID-19 Tests, Treatments, Vaccines – WHO