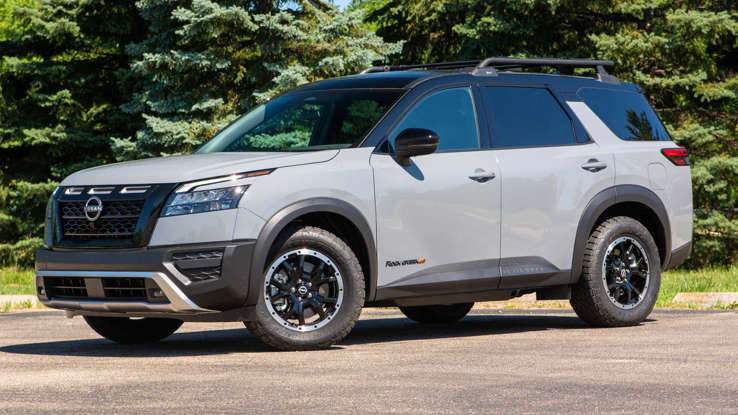 Off-road tires, a lifted suspension, and rugged style make this a family-friendly three-row for light trails.

In 2019, as the Nissan Pathfinder was preparing to wrap up its fourth generation on the market, a new trim appeared. Nissan intended for the Pathfinder Rock Creek to be a rugged, outdoorsy alternative to the carpool-lane cruiser that the automaker had been selling since 2012. But the result was more style than substance.

The fifth-generation 2022 Nissan Pathfinder was already far better than the car it replaced, and now a new Rock Creek Edition has pulled off the same feat. Rather than some extra cladding and off-roadish wheels (which you still get), the new Pathfinder Rock Creek sports trim-specific front and rear fascias, a stouter roof rack, far sportier all-terrain tires, and an off-road suspension. Overall, this trim feels better thought out not just relative to its predecessor, but it should also serve as a capable challenger to the burgeoning class of rugged three-row crossovers, such as the Ford Explorer Timberline and Honda Pilot Trailsport. 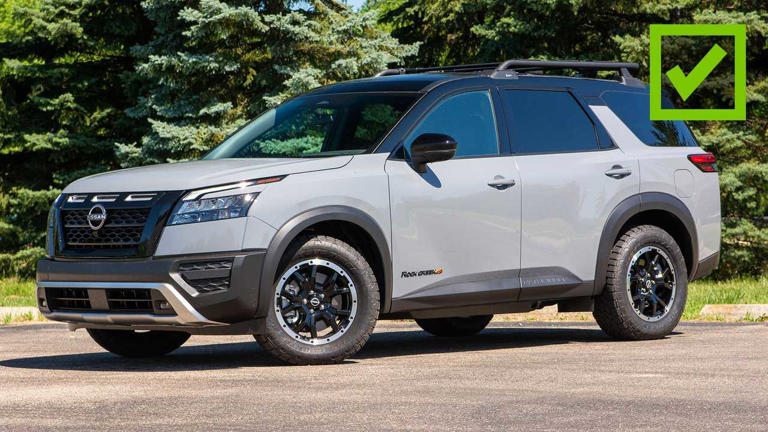 I really can’t express how positive a first impression the Pathfinder made on me when I saw it sitting in the driveway. The Solid Gray paint, standard contrasting roof, and amplified cladding around the bottom, combined with the slightly knobbly all-terrain tires and beadlock-look wheels, present a striking figure. Other Rock Creek touches, like the new front and rear fascias, help this trim stand out from the run-of-the-mill Pathfinders. And in the cabin, there is orange contrast stitching that matches the Rock Creek stitching on the backrests. 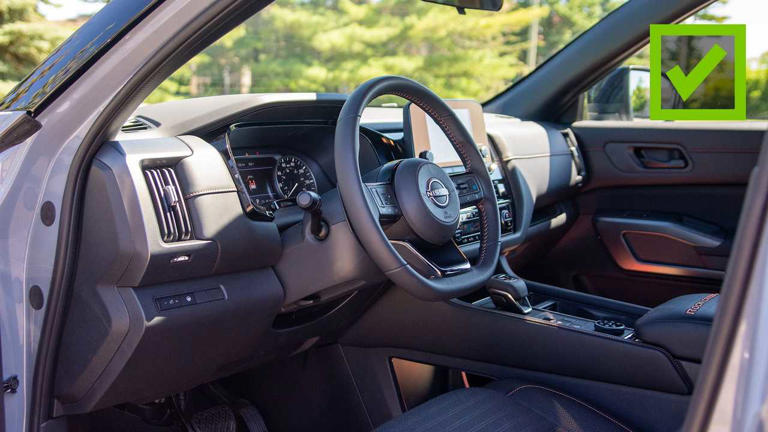 The suspension changes, more rugged tires, and the roof rack all signal sacrifices on interior comfort, but they rarely materialized. I heard a touch more wind noise and a slight increase in tire roar, but both were well within what I’d tolerate in a three-row CUV. The ride quality is just as good as the standard model, too. Really, Nissan struck a lovely balance in upgrading the Pathfinder to the Rock Creek. 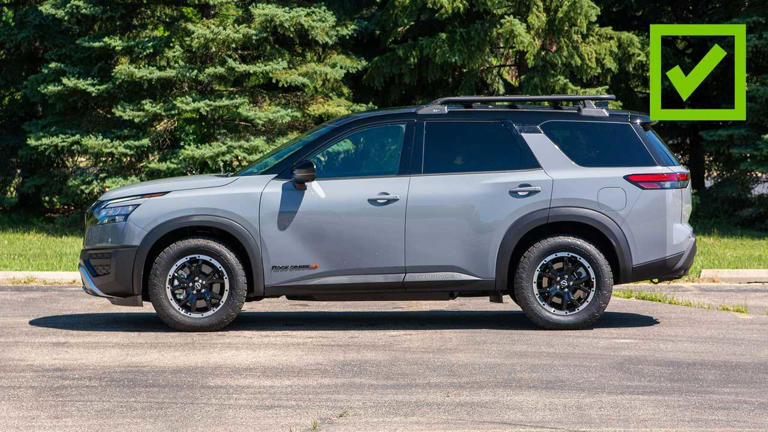 The last Pathfinder Rock Creek had a roof rack, but it was an insert on the factory roof rails. The new Pathfinder Rock Creek sports a unique tubular roof rack with a 220-pound limit. The suspension boasts a higher ride height – Nissan isn’t sharing a figure, but I’m betting it’s about an inch – and those AT tires actually provide some added performance off road. Nissan could have very easily rehashed the last Rock Creek, but this new one feels like arguably the most capable vehicle in the class (until Jeep gets off its backside and sells a Grand Cherokee L Trailhawk). It’s certainly packed with the strongest array of off-road equipment. 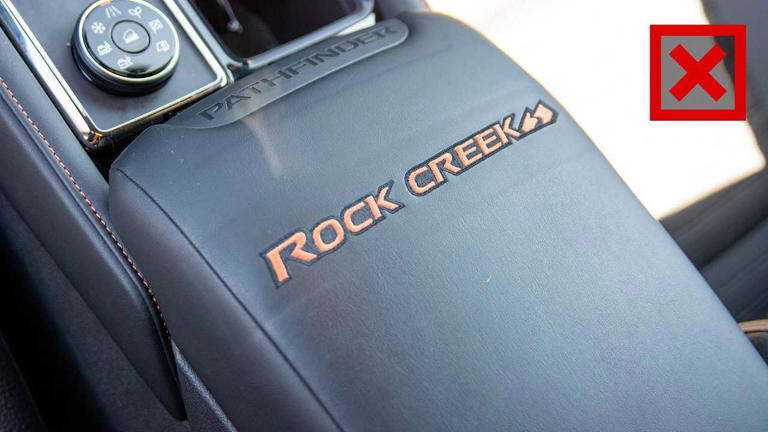 The last Pathfinder Rock Creek was quite clearly a style package and nothing more. The latest, though, goes so far beyond the original’s brief that I’m left wondering why Nissan hasn’t applied its far more established badge to the Pathfinder. Considering the functional improvements and the badge’s history of off-roaders (including the beloved Xterra Pro-4X), there’s arguably better name recognition in a Pathfinder Pro-4X than a Pathfinder Rock Creek. 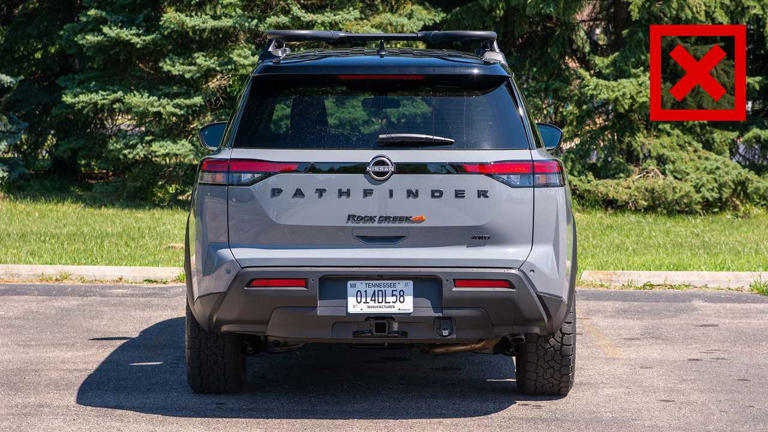 Going with Pro-4X would also help solve things on the badge front. The Rock Creek logo is large and appears on the both front doors, on both front seatbacks, and atop the center console. And take a look at the above image – beneath the “PATHFINDER” wordmark that already crowds the tailgate, sits yet another Rock Creek identifier as well as a four-wheel-drive icon. I get wanting to advertise what a vehicle is, but the Rock Creek goes a smidge too far. 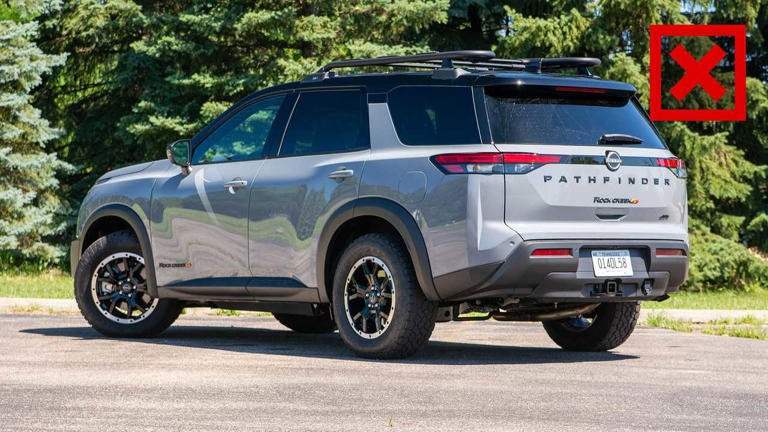 The Pathfinder Rock Creek Edition is slated to arrive on the market later this summer, but even in early July, Nissan still hasn’t shared pricing or fuel economy figures. I’m betting the new Rock Creek will come in between $40,000 and $45,000, which would undercut the $49,000 Explorer Timberline and $46,000 Pilot Trailsport, but until Nissan releases that info, I can’t be certain. And on the economy front, the Pathfinder is already more efficient than those two rivals – will that remain the case with the AT tires and roof rack, though?

Airbus A380 superjumbo makes a comeback amid travel rebound